And it wastes Shweta Tripathi Sharma in a thankless role. 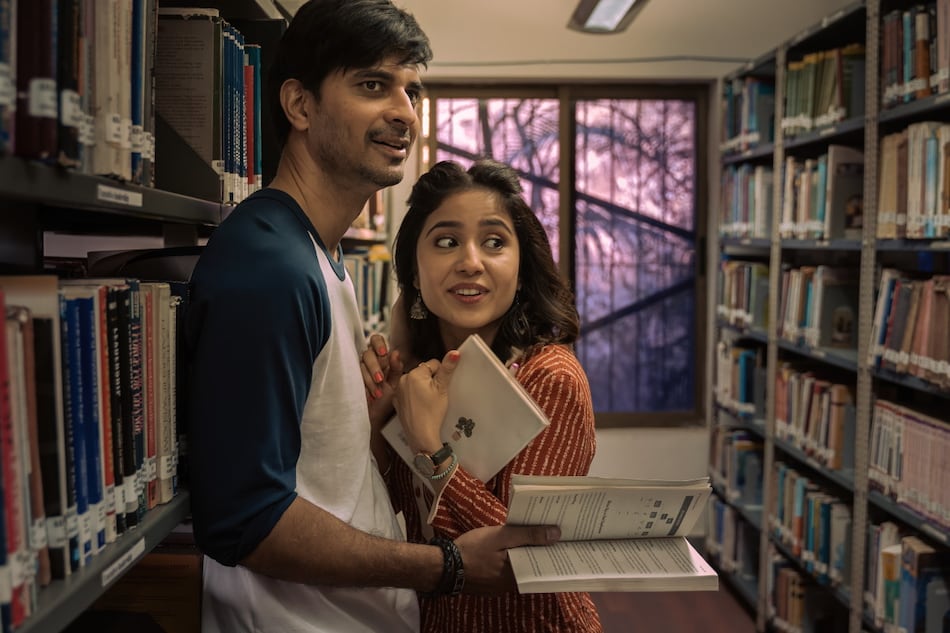 Yeh Kaali Kaali Ankhein — now streaming on Netflix — has an inherent promising black comedy setup at its core. In it, a powerful politician's doe-eyed daughter Purva Awasthi (Anchal Singh, from Undekhi) has had her eyes on the accountant's veritable small-fry son Vikrant “Vicky” Singh Chauhan (Tahir Raj Bhasin, from Chhichhore) since they were kids at school. (Yeh Kaali Kaali Ankhein's premise would be creepy on several levels if you were to gender flip the whole thing. But that's a different debate.) And because Vikrant is extremely beloved to Purva, none of the dozens of henchmen and enforcers that work for Purva's dad, who more or less runs the town, dare lay a finger on him. Vikrant's life is quite well protected, though neither he nor the Netflix series take much advantage of that.

That's largely because Vikrant is — simply put — a coward. Even his dreams are purposefully small, almost as if he's scared that were he to desire more, the universe might retaliate or something. And that's really what Yeh Kaali Kaali Ankhein is truly interested in: Vikrant's transformation. Creator, director, writer, co-producer, and showrunner Sidharth Sengupta (Apharan) — whether the new Indian Netflix series goes right or wrong, there's one man to praise or blame — wants to depict the slow but inevitable descent of a man who is caught between sticking to his principles and pulling out of Purva's orbit.

Except Yeh Kaali Kaali Ankhein takes too long to get there — and the journey is not remotely interesting or intriguing enough. At times, it feels like Sengupta took a movie-length narrative and stretched it to fit an eight-part first season (that ends on a cliffhanger). It's also so heavily plot-driven that it gets tiring after a point. If there's a straight path available from point A to point B, Yeh Kaali Kaali Ankhein will take three detours on the way. Everything is made unnecessarily complicated. It wants to force its characters into uncomfortable situations, but finds inelegant ways to get itself there. It's like Sengupta writes himself into a corner, then just chooses to give up, instead of finding a better route.

From Human to Yeh Kaali Kaali Ankhein, What to Watch in January on OTT

When it's not predictable — Sengupta tries to sell us on deaths that are not believable to begin with — it keeps information from the audience to propel its thrills and mystery. And on more than one occasion, the new Indian Netflix series lies to viewers to set up its twists and turns. And roughly midway through, Yeh Kaali Kaali Ankhein essentially jumps the shark — I can't speak to specifics because spoilers, save to say it's wholly illogical, but Sengupta simply drives on, as if pretending that we are too dumb to catch on. Yeh Kaali Kaali Ankhein is also frustrating on the whole as the first season is left deliberately incomplete. Netflix doesn't have a good track record of greenlighting future seasons of its Indian original series; it's possible we might never see its threads wrapped up.

Set in a nondescript fictional Uttar Pradesh small-town called Onkara, Yeh Kaali Kaali Ankhein opens with an Othello quote, but bears no connections to the Shakespeare play. The Netflix series revolves around the aforementioned Vikrant (Bhasin) whose first-episode voiceover takes us through his early life until present day. The menace that is Purva ruined his childhood, Vikrant claims, because she was always after him. His luck changed after she left town midway through their schooling years — Yeh Kaali Kaali Ankhein never tells us why — before Vikrant met and instantly fell for Shikha (Shweta Tripathi Sharma, in a thankless role) during his college years. Vikrant and Shikha's love story is told entirely via a song; Shikha is less a character and more a Vikrant prop.

But all that goes for a toss in Yeh Kaali Kaali Ankhein after Purva (Singh) returns to Onkara. After Vikrant's accountant dad Suryakant Singh Chauhan (Brijendra Kala, from The Aam Aadmi Family) pushes him to work for his master, the infamous politician Akheraj Awasthi (Saurabh Shukla, from Jolly LLB), Vikrant is once again thrust back into Purva's orbit. And this time, it's like being sucked into a black hole. Purva quickly wins over the Chauhans by getting her dad to pay Vikrant a lot more than his Bhilai engineering job (all for managing Zumba dance classes that she runs, humiliating him in the process) and giving Vikrant's sister (Hetal Gada, from Dhanak) a job too. Purva is trying to trap ‘em all. And as Vikrant tries to get out of her thumb, she makes the family's life hell in response.

Still, Vikrant doesn't want anything to do with Purva — after all, Shikha and he want each other — and he does little to hide it. Why then is Purva insistent on getting Vikrant to be his? Because he's the only one who didn't want her in school. The woman being the instigator flips the traditional guy-stalking-girl mould (that's been deeply romanticised by Bollywood) though despite that, it's the man who causes more damage on Yeh Kaali Kaali Ankhein. Maybe that's a way for Sengupta to comment on how men just think about themselves, how men are the worst. It's Vikrant's actions — or rather inaction (plus flip-flip choices) — that push Shikha and her family into more trouble than Vikrant and his family have to deal with. It's Shikha who has to demean herself, because of Vikrant.

Some of this could have Gone Girl-esque vibes if Yeh Kaali Kaali Ankhein knew what it was doing. But alas, that's too much to expect. Tonally, the new Indian Netflix series is all over the place. There's goofy comedy infused randomly in places. At times, it gives into the mood of the occasion and forgets the character's mood. It upends the dynamic between characters to suit the narrative, completely ignoring what it established across several episodes. More annoyingly, most of its characters are stationary and don't grow. Naturally, Vikrant's arc is the deepest — but you only feel that because Sengupta deals such a poor hand to everyone else. Except Vikrant, the rest of them exist simply to move the plot along.

And it doesn't help that Yeh Kaali Kaali Ankhein operates in a very heightened reality. On some level, it's a bizarro comedy but wrapped up in an intense drama. A character will come up with a crazy plan, before forcing other characters to go along with it, which in turn pushes the Netflix series onto a more absurd level. At times, it feels like Sengupta is pushing himself to come up with a more and more contrived and convoluted plot — because he doesn't know what else to do.

On top of that, Yeh Kaali Kaali Ankhein will do anything for effect, rather than look at what makes sense given the situation or the characters involved. There are so many WTF moments in the new Indian Netflix series, leaving the audience no time to discuss or react to them. (It's a trait Yeh Kaali Kaali Ankhein shares with Netflix's previous Indian thriller series, the Raveena Tandon-led Aranyak, from December last year.) You might be tempted to say that Netflix India is kicking off 2022 on a terrible note — but outside of a couple relatively-better-off titles, this is now the rule rather than the exception. Just look at what it gave us last year.

Twitter Spaces Now Lets All Users Record a Session, Will Be Available for Public Playback