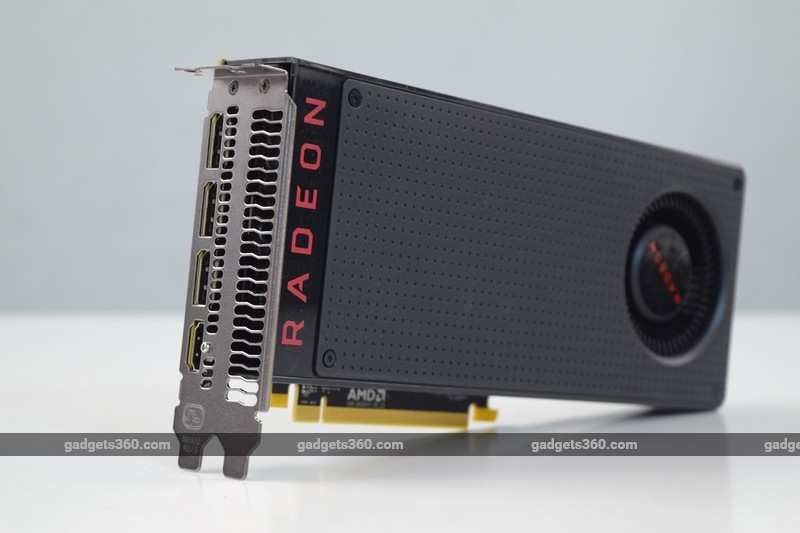 This year has been a big one for AMD - it saw the launch of the RX 480, one of the most hyped video cards in recent memory, and in India it saw an irresponsible flip flop on pricing that did it no favours in the eyes of gamers. Gadgets 360 spoke to Raja Koduri, Senior Vice President and Chief Architect and Chris Hook, Senior Director, Global Marketing and Public Relations, at Radeon Technologies Group, to find out more. In the first part of our interview, we talked about AMD's interest in virtual reality in India. Now, we're focusing on the state of the GPU maker in India.

As far as video card launches in India go, the RX 480 was dismal to say the least. Pricing was a roller coaster for days after the launch, and several sources speaking to Gadgets 360 claimed that the company was at the mercy of the distribution chain, resulting in overpriced hardware and next to no availability.

“We watched closely and learned quite a bit with the RX 480 launch," says Koduri. "This was one of the GPU launches in recent times or maybe even forever that generated so much demand in regions, India was one example, South America another one and we learned quite a bit on how much extra tax that is added."

"Just the distribution channels taking advantage of the fact that there is so much demand, they were just making lots of profit. We don't get any of that stuff,” he adds.

“The distributors were taking advantage of the situation of the demand and jacking up the prices. We have identified the situation," says Koduri. "We actually had our sales force jump in right away and both Lisa [Su, AMD CEO] and me were watching this very carefully. We learned quite a bit and you'll see us getting better with the next GPU launches. And the distributors who take advantage of this stuff, of course, they won't get allocations next time. ”

“We're going to be very strict about this and we're going to take much more direct distribution too if this happens again. Through Flipkart or whatever else," he says. "We're looking at that too. How do we get product to the consumer fastest way."

Having said that, AMD isn’t exactly top of mind for GPUs in the country. Although it plans to make its products more widely available, that’s nothing without awareness. In the days prior to its acquisition by AMD, ATI as it was then known seemed to have a lot more focus.

“Frankly part of the journey as we were acquired by AMD, was a belief in the industry that the discrete graphics were becoming less important and integrated graphics were becoming the centre of the graphics universe,” says Hook. “Since then we've recognised that as we look at Compute and Professional Graphics and processing and virtual reality, discrete graphics have become important again and massively important in a way that we could not have conceived.”

(Also see: AMD Reaches Deal With Alibaba to Use Chips in Cloud Service)

“I think now with things going on like Baahubali and our partnerships there," he adds. "This is really our opportunity we're going to be start telling the graphics story in India at a volume level and at a focus level and at an investment level in marketing that really hasn't been there for many years. So you are about to see somethings change dramatically on how we tell our story and market our brand.”

Although marketing seems to be a bugbear that may rectify itself in months to come, AMD’s initiatives have usually found themselves a part of other pieces of tech, such as its Mantle platform used in Microsoft’s DirectX 12. Compared to Nvidia which uses propriety standards and platforms, AMD’s generosity by making its research and development efforts open may have cost the company financially. Koduri however begs to differ.

“Alibaba selected AMD for their cloud. That would not have happened without our open source strategy," he says. "And you'll see the rest of this quarter and into 2017 and all, many strategic victories that AMD will get and RTG will get because our investment in these tools is being done.”

“Doom for example, we implemented shader intrinsics which are only available on PS4 in open source form," adds Koduri. "The developer integrated it and we're seeing phenomenal performance in RX480 its performance per dollar is just unbeatable on Doom.” Despite this, Koduri agrees that it will be some time before AMD can make a dent in non-gaming markets, where Nvidia still has a real lead.

(Also see: Everything You Need to Know About the Nintendo Switch)

“There are many proprietary infrastructures that are competition has built around CUDA and other things," he says. "We have to break those barriers. Our approach is being appreciated. The world's biggest companies right now - Google, Facebook and all, they're entirely based on open source infrastructure. They love AMD's strategy that we are an open source first company."

Interestingly, as AMD is working on making inroads outside of gaming, Nvidia might have scored a coup in the gaming world. This generation of consoles has seen AMD power the PS4, Xbox One, and the Wii U. The Nintendo Switch, announced last week, is the first console from Nintendo that doesn't have AMD hardware ever since the Nintendo 64.

“We love all our partners. One thing that you can say about AMD to a fault is we are a partner first company. So Nintendo continues to be a very valuable partner for us," says Koduri. "They had to make a set of technology choices and product choices for a given point of time and we think they made the choice that they thought was the best for them for a given point of time. But it's one point in time," Koduri says.

“We continue to be engaged with them and their focus on mobile which was not our product portfolio strong suit. We didn't really have a readymade product that could go into that form factor. So if they focussed on high performance, obviously we're really the only choice. They made a choice, we congratulate them. We wish Switch would be an enormous success, and there will be a next one.”

Windows 10 Creators Update to Arrive in Early 2017 With New Gaming, 3D, and Sharing Features
AirPods Will Need More Time Before They Are Ready, Apple Says