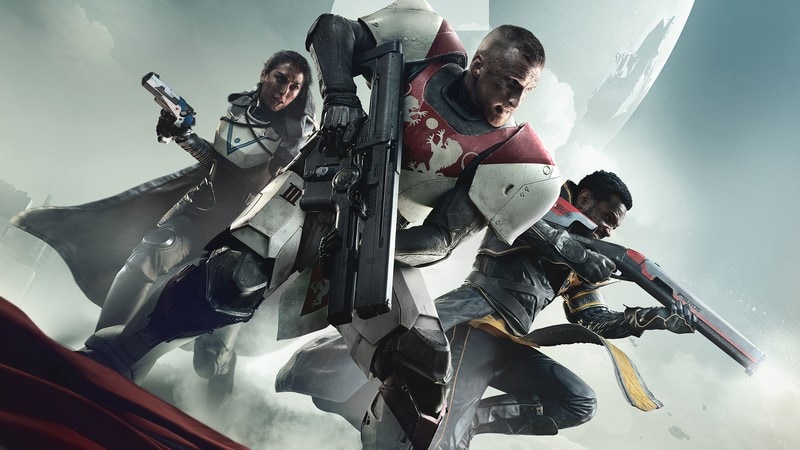 Destiny 2 is the follow up to 2014's Destiny. In the run up to its release, developer Bungie has stressed on how much of an improvement it is over the original. While the first game had its fans, it was panned at launch for being far from complete, and shallow in terms of content. Does Destiny 2 fare any better?

When you fire up Destiny 2 for the first time, it shows off your feats from the previous game which is nice touch. Like before, you're playing as a Guardian - a souped up power ranger who can shoot space magic from the finger tips, and summon force fields at will. Similarly, you can choose between its three classes - Warlock, Titan, and Hunter, each with their own unique skills and abilities.

Destiny 2 begins with your city under siege from the game's big baddie, Dominus Ghaul. Before you know it, you're stripped of all your powers and are forced to regain them before you can take the fight to Ghaul and his army.

The idea of needing to regain your powers after having them for the epilogue - much like the Metroid Prime games - is a fun premise, but Destiny 2 doesn't spend too much time on this idea. Instead, you get your powers back just ten minutes later thanks to some extremely convenient narrative elements. Choosing to say “this is your destiny” makes Destiny 2's much hyped storytelling chops, surprisingly pedestrian.

However this matters little if you're interested in taking down hordes of disposable aliens, and Destiny 2 serves them up in droves. The gunplay is solid, with an adequate amount of recoil from hand cannons, wisps of smoke from rocket launchers, and punchy auto-rifles that make putting a bullet between the eyes of its many enemies a treat. It's another thing altogether that there's very little difference in enemy variety compared to the last game, which old-timers could find annoying.

In terms of mission structure, you'll visit a new location, finish a quest before you can explore it freely - allowing you to partake in events and side-missions known as Adventures, rinse and repeat for around 12 hours. The levels themselves are varied fare, from floating platforms on the moon Titan to underground installations, and they're fantastic to look at. Strong art direction complements gorgeous graphics, making Destiny 2 quite the looker.

Destiny 2 on PC Is Exclusive to Battle.net and That's Great. Here's Why.

Further strengthening its production values are music and voice acting. The latter has solid performances through and through while the former might not have the legendary Marty O'Donnell at the helm, you won't notice - mixing familiarity with just enough difference as warranted for a sequel.

Although the game looks great and has excellent gunplay, it's also got a large share of concerns. For one, gliding as a warlock feels broken, so expect a lot of trial and error to get past vast chasms. In addition to this, respawning has major issues. Multiple times we were brought back to life several checkpoints ahead of where we were supposed to be. This was problematic as we could not progress further, because we had not cleared previous areas, that were now inaccessible because the game pushed us so far ahead. Reloading our save file fixed this, but it's frustrating all the same. As were the jumps to a black screen before a cut-scene, making events not seem as cohesive or fluid as they could be. These weren't the only issues that felt jarring either.

The other big problem is Destiny 2's microtransactions. There's the cosmetic type, asking you to pay to change the colour of each piece of armour - something the first game didn't do. Previously one shader could be used multiple times across all your armour. So if you aren't keen on paying, you have to hope the game grants you all the shaders you want, which is unlikely as they're randomly generated. Given how the Destiny community loved shaders and the customisation they brought in the first game for free, its tragic to see Bungie and Activision resort to this.

What's worse though are the addition of microtransactions that are seemingly pay-to-win. They allow you to boost your health regeneration, and the rate at which you can use your special abilities or grenades. Call us old-fashioned, but these have no place in a game that has a starting price of Rs. 4,199 ($60 in the US), which will be supported with paid content packs through the years.

Destiny 2 Microtransactions Can Get You Items That May Affect Gameplay: Reports

Rather than pay for the game and its season pass, we'd recommend checking out Destiny 2's base game if you're interested before bothering, considering Bungie and Activision's approach to monetisation.

The base game itself is chock full of things to do. Aside from the single-player campaign, there are co-op modes with Strikes and Raids (going live from September 13), along with the Crucible that allows for player versus player combat. For most part, the net code held up well in these segments, and despite mass reports of PS4 Pros crashing, we faced no such issue during our time with the game.

At the moment, Destiny 2 does a fantastic job of improving on the strengths of the original game along with bringing some new additions to the table. However, not all of these are good or warranted, marring what could have been a perfect sequel. We won't be surprised to see it evolve over the course of its lifespan though, hopefully for the better.