With Thunder Tier One, Krafton presents a nine-mission single-player campaign. 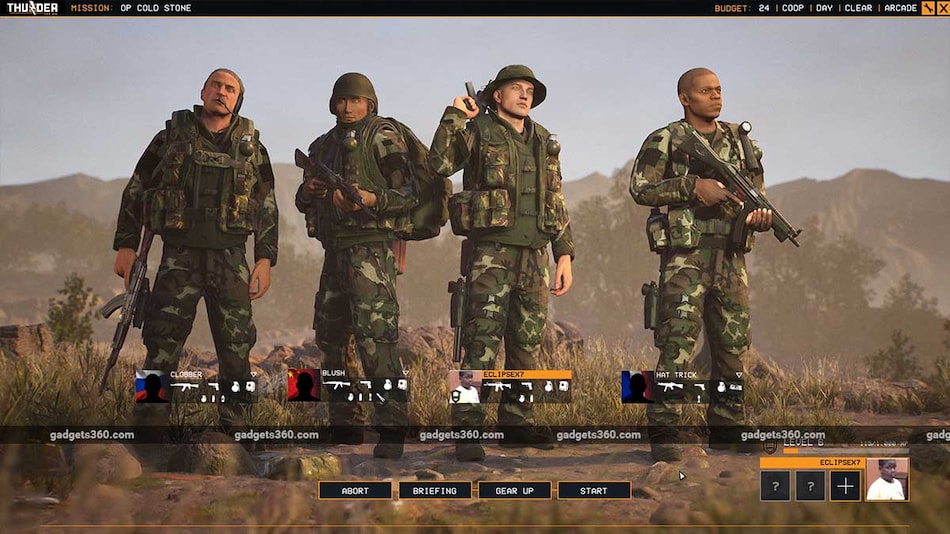 Thunder Tier One can be played with friends or AI teammates

We've always had first-person shooter games to pass our time with. Games such as Counter-Strike, PUBG, Apex Legends, Call of Duty, and Battlefield come to mind as I make that statement. There's a different category of games that are just as interesting and addictive: top-down shooters. Popular top-down shooter games such as Nuclear Throne and Animal Royale have a decent number of active players still enjoying each and every minute of it. Personally, I've never been fond of this category, partly because of the way we have to shoot the enemies. It just doesn't feel “traditional” to me.

But over the past few weeks, I tried my hands on a new game from the developers of PUBG, Krafton. What does Thunder Tier One bring to the table? Is it a revolutionary game or just another title that will bite the dust? Let's find out. I've tested the game on my PC which packs a Ryzen 3600, Nvidia GeForce 1660 Super, and 16GB RAM.

Thunder Tier One is a tactical top-down co-op shooter that is set in the 1990s and lets you join an elite task force that is assigned to stop a terrorist organisation from infiltrating the fictional country of Salobia. The story follows a four-man army squad that can be AI-controlled or human teammates. Thunder Tier One has a single-player co-op campaign and a multiplayer mode wherein you can create lobbies with your friends.

The campaign is not like your usual games with proper story mode and dialogues. Instead, this one follows a nine-game mission. Each and every mission in the Thunder Tier One campaign mode is different with new locations and new enemy placements. However, the final goal is almost the same. You have to either free a hostage, capture an enemy, or search for intel.

The top-down perspective could be a bit hard at first, especially for those coming from first-person or third-person shooters like me. However, the developers have included a quick but very useful tutorial round, wherein they walk you through all the controls a Thunder Tier One soldier needs to know. The point-of-view sure affects your gameplay and it took me some time to adapt to the way the character moves.

Thunder Tier One is a game that needs you to communicate with your teammates. Playing with AI is a hit or miss. While the game does its best at providing navigation commands and pings, the AI is not that clever. There were times when my teammates were still in the mission area while I was at the extraction point. At one point, I was in a situation where I placed an AI to cover my back while I cleared the front area. But the AI was stuck on some kind of furniture and of course, the enemy AI finished me off then and there. However, these glitches are rare and don't happen in every game. Thunder Tier One will be much more fun if you play with your friends and plan out tactics and attack accordingly. However, if you are someone who wants a challenge, the game does provide you with some interesting difficulty settings such as Lone Wolf, which as the name suggests will have you on the field alone, without any human or AI teammates. There are a couple of other such settings which make the game more interesting and engaging.

With Thunder Tier One being top-down, it's obviously difficult to have a wider point-of-view. So, as you move forward towards the mission, the enemies just keep popping out of the blue. I have been caught off-guard a million times and got knocked out for not being behind cover. When the enemies are out of sight, they leave a sound wave whenever they walk around, and you can see those ripples on the corner of your screen. This is a good way to spot them. A quick peek can lure them out of their cover while your teammates are able to pin them down.

Before starting each mission in Thunder Tier One, you and your teammates are provided with a brief report about the place and all of your tasks. After reading it, you can then go ahead and customise your loadout depending on the tasks you are allotted. You can allot specific designations to your teammates, so one can be the medic while the other is a techie. This way, the team functions better. The game also allows you to create presets for loadouts which is a nice touch.

There are a ton of guns in the game to choose from like the UMP45, AS VAL, CAR-15, AKS-74U, and many more. However, to me, it never felt like the weapon I chose changed the outcome of the mission. It hardly takes more than three bullets to kill an enemy, so switching to another weapon didn't change the gameplay much for me. This might just be a personal choice.

Unlike PUBG, this is not a first-person shooter — that means you have to think before you dive into anything headfirst. Information and patience along with some wit are key in Thunder Tier One. No matter what guns you have, intel is king.

Thunder Tier One gives you a lot of options for customisation

You can meddle around with multiple gadgets in the inventory such as M18 Claymore which is a motion-triggered landmine, M112 Demo Charge which is perfect for breaching closed doors, or Fiber Optics Camera that can be used to survey the enemy area before breaching in. This way, you won't be caught off guard.

There's an Electronic Toolkit and a Lockpick too which can come in handy at any given time. These are some of the nifty gadgets that give Thunder Tier One a quick turnaround towards a better planned out strategy. Of course, you have some of the usuals like hand grenades and smoke grenades that can be very handy at times.

Combat in Thunder Tier One is quite decent. There's no melee, so that means there's no point in trying to be a master of stealth. You'll always see bullets whizzing past. The sound design for footsteps and especially the rains while wandering through a forest is immaculate. Not to mention the gunshots — each bullet shot has the perfect amount of bass and sounds really good overall.

Thunder Tier One follows the same mechanics as PUBG. If you or one of your teammates get shot multiple times, they do not die. They are just “knocked down.” While being knocked down, they are still able to shoot at the enemy. This way, a compatriot can heal them up and get them on their feet without actually having a man down. Even if all your teammates are finished off — which is rare — you can go on to finish the mission. It's not necessary to have all the squadmates alive as long as the tasks are all completed. The game can become a bit stressful when you're facing a lot of enemies and when your seemingly foolproof tactics don't pan out the way you intended them to.

Thunder Tier One is an amazing game if you are someone who appreciates the tactical side of shooting games. The graphics and the mechanics are really good for a top-down shooter game and there's no chance you'll hate the combat. The game goes for a retro look from its splash screen to UI — and I was up for it.

The lobby can be a bit intimidating for first-time players but once you get a hang of it, you'll find yourself fidgeting and customising things here and there. The AI teammates are not that clever. However, they do not hinder your experience of the campaign. The Thunder Tier One missions might seem a bit monotonous because the tasks are usually: enter the area, kill enemies, retrieve intel, get out. However, it's the way you execute those missions that keep you tied to the game.

Overall, Thunder Tier One is a fun game to spend some time with your friends and not rage quit, while also having some brainstorming sessions over your next plan of attack.

Thunder Tier One is available on Steam for Rs. 529.