Battlefield 2042 Review: Is This the Future?

Battlefield 2042 is the first game in the franchise to entirely ditch the campaign mode. 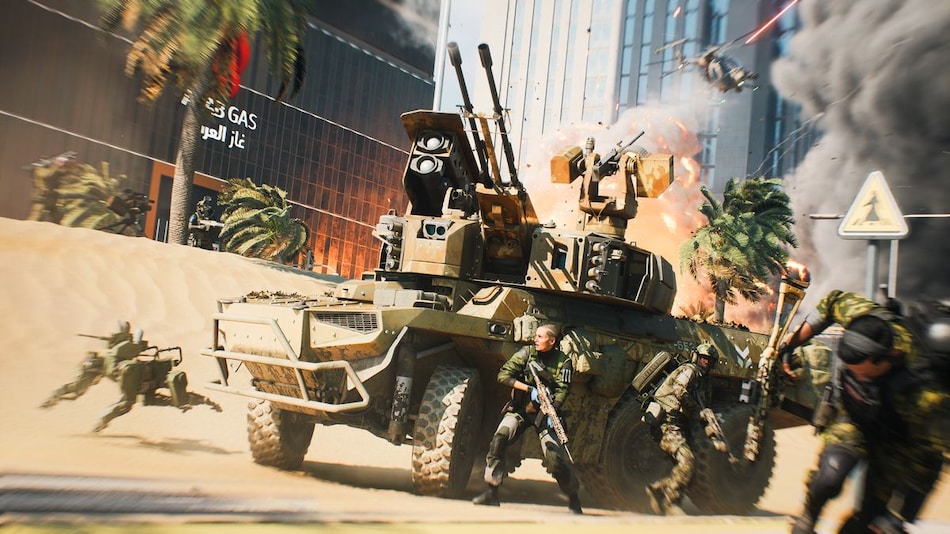 Battlefield 2042 is a first-person shooter that doesn't have a campaign mode. Battlefield, developed by Electronic Arts and DICE, has long been known for its single-player campaigns as well as its 64-player lobbies. The latest iteration of the popular first person shooter franchise ditches these two factors that made it popular, entirely. Battlefield 2042, as the name suggests, is set 100 years in the future from the original game — Battlefield 1942 — that made the franchise a blockbuster. Has Battlefield found a new lease of life or is it destined for the history books?

I played the game on the Xbox One S and here's what I think about Battlefield 2042. There is a lot going on in the game, and not everything works out in its favour. Some parts are good, while some parts make you question what EA Dice was thinking while developing the latest Battlefield title.

Battlefield 2042 gets three game modes: All-Out Warfare, Hazard Zone, and Portal. The first two modes let players engage in a warzone in seven maps that are spread across countries. These maps include:

Let us dive into the game with the All-Out Warfare mode. It is utter chaos where 128 players are let loose in an expansive map in Battlefield 2042. Players are called No-Pats, who basically are country-less mercenaries and fight for both sides of the war. The players are divided into two teams — Russia and the United States — with their primary objective being capturing the map.

The All-Out Warfare mode in Battlefield 2042 further has two sub-modes: Conquest and Breakthrough. In Conquest, players have to gain control of various objectives divided in sectors. Both teams start from an end of the map and by working their way, capture all the objectives. While I played Conquest, capturing the objectives closest to you is easy in the beginning, but with the chaos that ensues with a 128 player lobby means that you're constantly dying and respawning.

A team would win in Battlefield 2042 once they have captured all the sectors in the map. In Breakthrough, however, teams are divided into offence and defence. The latter has the majority over the sectors while the former fight to push their way through and defeat the defense. As the name suggests, All-Out Warfare witnesses constant crossfire between the teams, with players running around capturing objectives or resuscitating fallen teammates.

All-Out Warfare, in my opinion, is best suited for Battlefield veterans as getting to grips with the physics and the gameplay will take time for new players. The lack of the single-player campaign mode in Battlefield 2042 doesn't really help. Players do have the option to play a “single-player” mode if they decide to play the Solo or Co-Op experience. But it really wouldn't help players get used to the gameplay as they're now stuck with up to 127 AI “opponents” and chaos still ensues. I began to start getting used to the gameplay after I spent a few hours, but more on that later. Was making the lobby big enough for 128 people really needed? I, honestly, am not sure.

The Battlefield 2042 loadout is pretty decent, with all 10 characters — called Specialists — getting a specific skill of their own. Specialists like Santiago ‘Dozer' Espinoza, Kimble ‘Irish' Graves, and Maria Falck would help players sustain life through armour or medkits. Other specialists are tweaked more towards assault, repair, or recon. However, the point of having Specialists becomes a bit moot since any character can be customised with different loadouts and gain those unique skills, once intended only for Specialists.

But get into battle and you see that Battlefield 2042 is really adept at weapon physics. Guns handle really well and in the right hands, even the first shot can be brutal. But on the flip side, this ability will be disheartening to new and relatively inexperienced players as they keep getting shot from miles out, as the maps are huge but the lack of cover is abysmal. Many times, I got shot randomly just trying to get from the spawn location to the heat of the battle, either by a sniper hidden in some random corner or an opponent who unsuspectingly creeped up as their footsteps couldn't be heard.

Battlefield 2042: no time to stay alive

Invariably, when a player would spawn so often, they would tend to figure out the various tools they have at their disposal. For example, Battlefield 2042 players have the option to either spawn at the base or one of the captured locations, in a vehicle, or through the special spawn location hidden by a teammate. If players are spawned far away from the action and there is no vehicle in sight, it is easy to just get a vehicle dropped to their location. The vehicle drop is a nifty feature to have since — I can't stress this fact enough — the maps are huge and the lack of cover means it's easy to get obliterated.

One of the good things that Battlefield 2042 gets is the ‘Plus' system that allows players to modify their loadout on the fly. With this, it's now easier than ever to switch scopes, muzzles, magazines, and grips of the primary and secondary weapons during a battle, making it easier to adapt to changing landscape and scenarios in the match.

Battlefield 2042 Hazard Zone: a glitch in the matrix?

The second mode in Battlefield 2042 is Hazard Zone and to be honest, there seems something amiss in the game. Even after spending more than 12 hours playing the game, neither anyone from my team nor I could actually get the game to connect us to a match. The game gets stuck in a loop, of sorts, while trying to join a lobby. Players get added to the four-person squad but they keep leaving. Even if the squad was full, it would inevitably lead back to the main menu.

Hazard Zone has a 24-player lobby with six squads of four players. The objective of this mode in Battlefield 2042 is to collect data drives and head for the rendezvous point for extraction. A squad wins by collecting these data drives and extracting right before the storm hits the map and wipes out the area. I can't really comment on how Hazard Zone was for me or my colleague. Hopefully, this is just a bug and is soon addressed by EA.

Let's move on to the final mode, and possibly the saving grace of Battlefield 2042 — Portal. This mode lets players get creative and how! Players have the ability to set all the rules or play by the rules set by other players. Portal also lets players experience Battlefield 1942, Battlefield: Bad Company 2, and Battlefield 3 on modern day graphics and engine. Additionally, players also have the opportunity to use 2042 arsenal in 1942, and vice versa. Basically, EA awants players to go berserk and probably all of this crazy is what may get Battlefield purists and newbies get hitched to the game for a long time to come.

Portal also gets a few sub-modes of its own, and the most fun of it all is the VIP Fiesta. Here, each squad gets a VIP and the opponent's task is to find and eliminate the VIP. However, the VIP status for each player is temporary, so with good teamwork, a squad can easily dominate the other. Furthermore, each time a player is respawned in Battlefield 2042 Portal, their loadout is changed randomly and that really adds to the fun factor of the game.

There is something about Battlefield 2042 that bothers me. It is the lack of identification for friendlies and enemies. Many times, when I think I'm aiming at an opponent, it turns out to be a teammate and by the time I can locate an enemy, I'm suddenly respawning. After a while, you do get the hang of identifying the tiny red dot above the opponent but by the time you spot it, you're already killed by someone else.

By ditching the campaign mode in Battlefield 2042, EA Dice has made the game a tiny bit more confusing and difficult for new players trying to get into the franchise. Veterans and die-hard (pun-intended) lovers of Battlefield will love it for the way it stays true to the gameplay of the older titles. The chaos of the 128-strong lobby isn't something I look forward to whenever I start the game, and I feel that may be true for most players.

Portal, on the other hand, is where Battlefield 2042 actually shines the brightest. The incredible creation tool gives players a free hand and shows the real prowess of the new game's engine. But what remains to be seen is how these levels of customisation will help the game sustain itself in the future.