Tree Canopy Lab will use aerial imagery and AI to map out where more trees are needed. 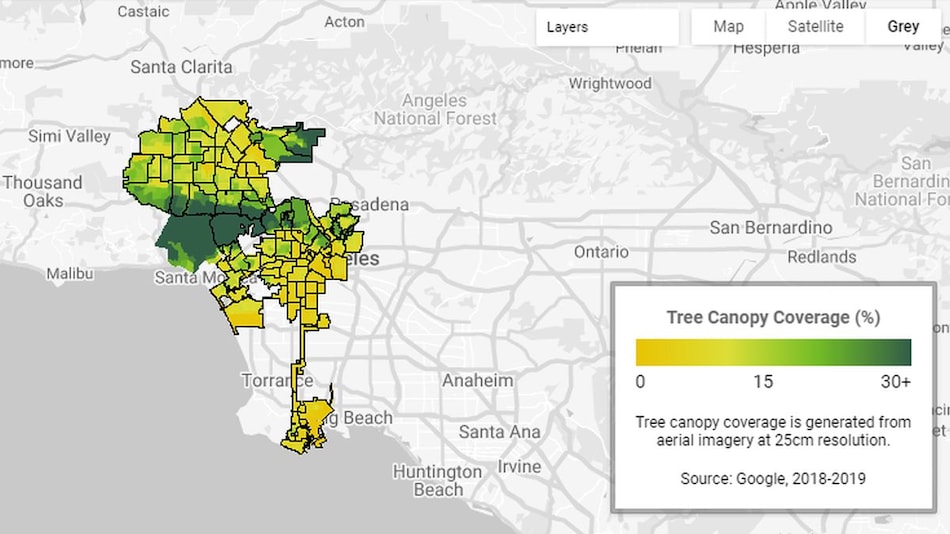 Google has unveiled a new tool called Tree Canopy Lab that can help cities plant more trees. Tree Canopy Lab will use aerial imagery to map out the green cover of a city and use AI to suggest where more trees need to be planted. Buildings are prone to trap heat during summers. Tree Canopy Lab can help bring the temperature down in vulnerable areas by identifying pockets where tree cover can be increased. Tree Canopy Lab is an initiative by Google Sustainability and will pilot in Los Angeles.

According to a study by the NASA's Jet Propulsion Laboratory, heat waves is Los Angeles have gotten more intense and frequent. Tree Canopy Lab also concluded that more than half of the residents of Los Angeles live in places where the tree cover is less than 10 percent of their neighbourhoods. Tree Canopy Lab by Google aims to bring about a change in the situation by inspiring people to take action to reduce emissions.

Tree Canopy Lab incorporates aerial imaging and Google's AI to figure out the locations with trees. Google uses planes to collect aerial imagery from around the world for Google Maps and Google Earth. The same imagery data will be used in Tree Canopy Lab to estimate the tree coverage across cities, starting with Los Angeles.

The information gathered on tree cover will be fed to an interactive map with additional data including population density, heat risk, land use, and neighbourhood boundaries. Putting together all the information, Tree Canopy Lab will to able indicate which areas are more vulnerable to high temperatures.

Google says that data on a lot more cities is on the way. The service by Google is free to use and the maps will be updated regularly. Any city planners interested in using the tool have the option to reach out to Google through a form that the company has posted along with today's announcement.

A similar tree mapping tool was launched on Tuesday by the conservation organisation, American Forests, with support from Microsoft. This tool has piloted in Maricopa County, Arizona, Rhode Island, and the San Francisco Bay Area.