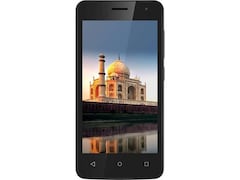 iVoomi Me4 is based on Android 7.0 and packs 8GB of inbuilt storage that can be expanded via microSD card (up to 64GB). The iVoomi Me4 is a dual-SIM (GSM and GSM) mobile that accepts Micro-SIM and Micro-SIM cards. The iVoomi Me4 measures 136.00 x 66.80 x 10.20mm (height x width x thickness) and weighs 113.00 grams. It was launched in Champagne Gold, Black, and Dark Gray colours.

Connectivity options on the iVoomi Me4 include Wi-Fi 802.11 a/b/g/n, GPS, 3G, and 4G (with support for Band 40 used by some LTE networks in India). Sensors on the phone include accelerometer, ambient light sensor, and proximity sensor.

iVoomi Me4 Price in India

iVoomi Me4 User Review and Ratings