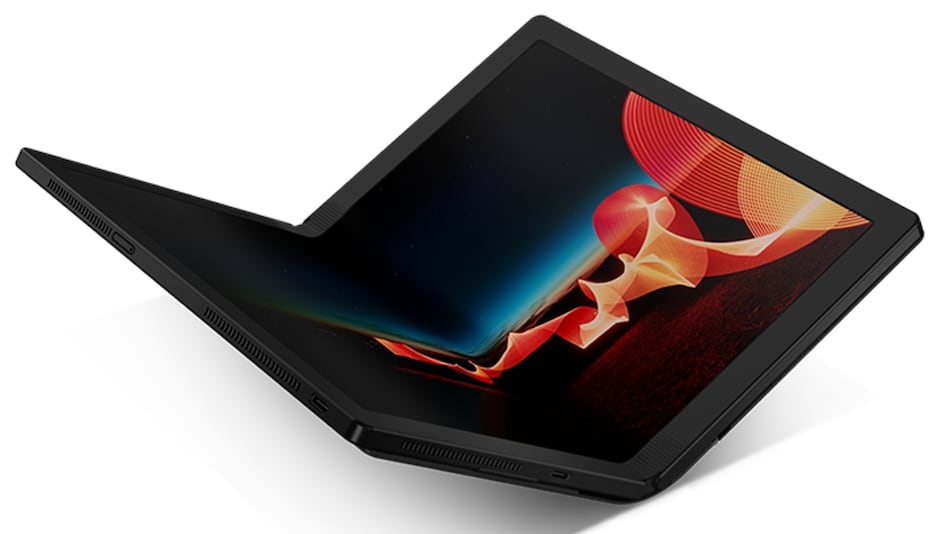 Lenovo ThinkPad X1 Fold, the company's first flagship laptop with a folding display, was launched in India on Tuesday. The ThinkPad X1 Fold features a multilink torque hinge that enables the folding design. Lenovo has also provided a Bluetooth Mini Fold Keyboard that nests inside the fold and wireless charges when it sits on top of the screen. The ThinkPad X1 Fold also doubles as a tablet when unfolded. The device can also be kept on a table using its built-in kickstand that's meant to hold the display up.

Lenovo ThinkPad X1 Fold price starts at Rs. 3,29,000. The laptop is currently available for purchase through the Lenovo India website and is listed there at an initial price tag of Rs. 2,48,508. Gadgets 360 reached out to the company and was told that the disparity in the listed pricing from the official one is due to offers that will last until the end of this month. Customers can also opt for a no-cost EMI option for up to six months.

The Lenovo ThinkPad X1 Fold laptop features a 13.3-inch 2K (2,048x1,536 pixels) pOLED display made by LG Display that can be folded to enable multiple use cases. There is a mechanical hinge between the display to enable the folding form factor. Users can use the ThinkPad X1 Fold in landscape mode to use as a regular laptop or move to portrait orientation to use it as a notebook and take notes or draw sketches using Lenovo's Active Pen. Lenovo has also bundled its Easel Stand for easy portrait or landscape placement on a desk, and the Bluetooth Mini Fold Keyboard to make the ThinkPad X1 Fold work like a traditional laptop.

Running on up to Windows 10 Pro, Lenovo ThinkPad X1 Fold comes preloaded with the Lenovo Mode Switcher app that allows the machine to change its orientation as per the requirement. Users can also split the screen into two or use it in full width. Further, the laptop automatically adjusts to display the on-screen keyboard when the Bluetooth one is not in use.

Unlike folding phones that are fragile and prone to be easily damaged, Lenovo ThinkPad X1 Fold is touted to be a rugged and tough device. It is claimed to have passed the MIL-STD 810H certification. Further, Lenovo says the ThinkPad X1 Fold went through additional testing to make sure the screen could handle the stresses of being opened and closed thousands of times.

The ThinkPad X1 Fold is powered by an Intel Core i5 processor, along with 11th-generation Intel UHD graphics, 8GB of LPDDR4x RAM, and up to 1TB of PCIe-NVMe M.2 2242 SSD. Connectivity options include Wi-Fi 6, Bluetooth v5.1, and two USB Type-C 3.2 Gen 2 ports (one of which can be used as a DisplayPort). There is also optional 5G/ 4G LTE support.

The ThinkPad X1 Fold can deliver up to 10.4 hours of video playback on a single charge. There is also 50W Rapid Charge fast charging technology.