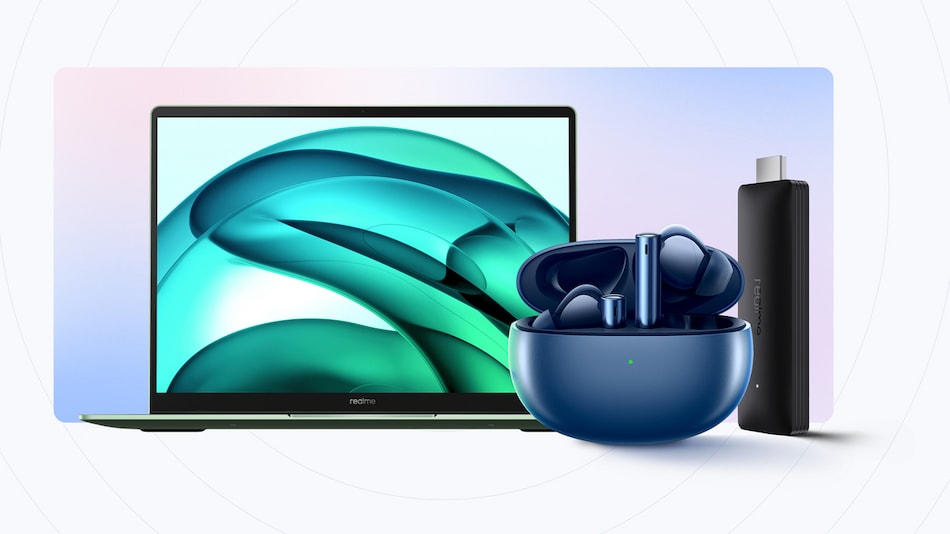 Realme Book Prime, Realme Buds Air 3, and Realme Smart TV Stick are all set to hit the Indian market on April 7, the Chinese company confirmed on Thursday. The new devices will be launched in the country through a virtual event that will be held on Realme's official social media channels. The Realme Book Prime laptop was launched globally last month alongside the Realme Buds Air 3 true wireless stereo (TWS) earphones at the Mobile World Congress (MWC) 2022 in Barcelona. The new Realme Smart TV Stick streaming device will sit alongside the Realme 4K Smart Google TV Stick that debuted in the country in October last year, and may be referred to as Realme FHD Smart TV Stick to differentiate it.

Realme Book Prime, Realme Buds Air 3 and Realme Smart TV Stick will be launched in India on April 7 at 12:30pm IST at a virtual event streamed live via the company's YouTube and Facebook channels. The brand also sent media invites for the launch. However, the price details of the upcoming devices are not known at this moment.

Realme Book Prime and Realme Buds Air 3 prices in India are expected to be aligned with the Europe pricing that was announced in February. Realme Book Prime price was launched with a price tag of EUR 999 (roughly Rs. 84,400) for the 8GB + 512GB storage option in Europe. The 16GB + 512GB storage variant is priced at EUR 1,099 (roughly Rs. 92,800). Realme Buds Air 3, on the other hand, are unveiled for EUR 59.99 (roughly Rs. 5,000). As of now, it's unclear how the Realme Smart TV Stick will be priced and positioned in the Indian market. It is expected to be priced at around Rs. 3,000 or lower.

The Indian variant of Realme Book Prime is likely to have mostly the same specifications as the Europe variant. It runs on Windows 11 and features a 2K display. Realme Book Prime is powered by an 11th Gen Intel Core i5-11320H processor, coupled with Intel Iris X graphics and up to 16GB of RAM and 512GB of SSD storage. Realme Book Prime has stereo speakers backed by DTS audio technology. The laptop also packs a backlit keyboard with a touchpad. It packs VC liquid cooling system to enhance heat dissipation speed. Connectivity options on Realme Book Prime include Wi-Fi 6 and a Thunderbolt 4 port. The laptop is claimed to deliver up to 12 hours of playback time on a single charge.

The Realme Buds Air 3 TWS earphones offer TUV Rheinland-certified ANC to reduce external noise by up to 42dB. The earphones have two microphones and feature 10mm dynamic bass boost drivers. The earphones support pairing with two devices at the same time. Additionally, there is a transparency mode. Realme Buds Air 3 are IPX5 rated for sweat and water-resistance as well. The Realme Buds Air 3 earphones are claimed by the company to deliver up to 30 hours of total playback on a single charge. They are said to offer 100 minutes of playback time with just a 10-minute charge.

As per the screenshots of alleged Flipkart promotions leaked online, Realme Smart TV Stick will run Android 11 TV and will offer full-HD resolution at 60 frames per second streaming capabilities. The TV stick is shown in Black colour and it is said to offer HDR10+ support. The upcoming TV stick from Realme could be powered by a quad-core ARM Cortex-A35 CPU paired with 1GB of RAM and 8GB of onboard storage. For connectivity, the new streaming device is said to have an HDMI 2.0 port. Realme Smart TV Stick is said to come with inbuilt entertainment platforms such as Netflix, YouTube, and Prime Video allowing users to access all their content in one place. Besides, Realme Smart TV Stick will offer access to Google Play, Google Play Games, and other services.