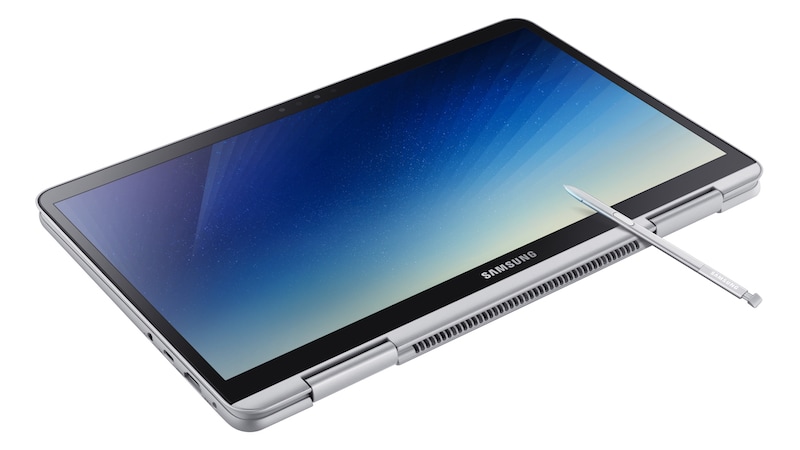 Samsung Electronics announced the launch of the new Notebook 9 Pen and three upgraded variants of the Notebook 9 on Thursday, both running Windows 10. The Notebook 9 Pen is the company's latest 2-in-1 PC that sports an all-metal magnesium aluminium chassis, which keeps the device at just 995 grams.

The 2018 variants of the Samsung Notebook 9 sport a 13.3-inch (900X3T & 900X3U) and 15-inch (900X5T, 900X5U, and Discreet Graphics 900X5T) Full HD RealViewTouch display with a resolution of 1920x1080 pixels. The notebooks are powered by an 8th generation Intel Core i7 processor, up to 16GB DDR4 RAM, up to 1TB NVMe PCIe SSD, and Intel HD graphics. The 15-inch variant offers an option of upgrading to a 2GB GDDR5 Nvidia GeForce MX150 graphics card. All the models will come in Titan Silver and Crush White colour variants. The Notebook 9 (2018) also has a fingerprint sensor, backlit keyboard, and precision touchpad. The Windows Hello camera - for video calls - has a 720p HD resolution. Connectivity options include two USB 3.0 ports, a HDMI port, microSD storage, and a single USB Type-C port. There is also a bundled 65W DC-in adapter. Samsung claims that the 75Wh hexacell battery on the Notebook 9 (2018) is its "largest and most powerful battery placed inside a notebook." Add to that, it also supports fast charging for the company's claimed "always on" capabilities.

The Samsung Notebook 9 Pen has a 13-inch (930QAA) Full HD RealViewTouch display with a resolution of 1920x1080 pixels. The 2-in-1 is powered by an 8th generation Intel Core i7 processor, up to 16GB DDR4 RAM, up to 512GB NVMe PCIe SSD, and Intel HD graphics. The Notebook 9 Pen has a bundled Integrated S Pen, along with a fingerprint sensor, backlit keyboard, and precision touchpad. Connectivity options include an HDMI port, a single USB Type-C port, and a regular USB port, alongside microSD storage.This model has a smaller 45W DC-in adapter and the same 720p Windows Hello front camera. It's powered by a 39Wh battery.

The new S Pen, bundled with the Notebook 9 Pen 2-in-1, is battery-free and built into the device for immediate use. Samsung claims it can recognise 4,096 levels of pressure with a fine 0.7mm tip and convenient tilt detection to allow a more natural writing and drawing experience. Earlier this year, the Samsung Notebook 9 Pro was launched with a similar embedded S Pen.