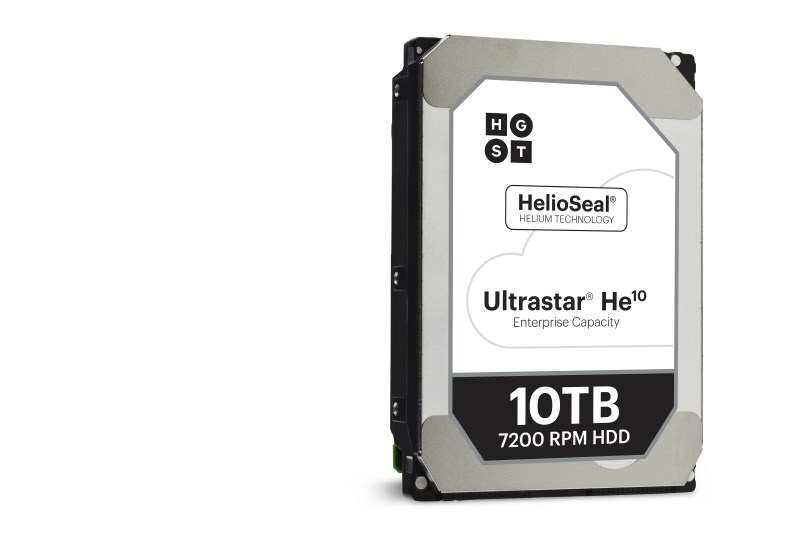 WD has announced that its subsidiary HGST will launch the world's first Helium-filled 10TB hard drive for enterprise and data centre usage, the HGST Ultrastar He10. Based on perpendicular recording technology, WD says this new drive offers the best power efficiency per terabyte and the best reliability of all hard drives on the market.

Helium is used to reduce drag and friction between the spinning hard drive platters and the read/write heads that float above them, allowing for denser platters and lower power consumption. The company is aiming its new model at data centres where capacity and cost effectiveness are paramount, such as those used for photo and video services as well as hyperscale cloud-based applications and big data analytics. The drive is expected to be running 24/7.

The Ultrastar He10 is built using HGST's third-generation HelioSeal process which uses hermetic seals to prevent the leakage of Helium, which is one seventh the density of air, commonly used in consumer hard drives. The company promises that its He series drives undergo severe stress testing.

The Ultrastar He10 has a five-year warranty and a MTBF rating of 2.5 million hours. It will be available with 12Gbps SAS or standard 6Gbps SATA interfaces in the standard 3.5-inch form factor. Areal density is as high as 816Gb per square inch and the sustained transfer rate is 249MBps. Pricing information has not been released.

HGST expects to transition its entire product line to Helium by 2017. Netflix is amongst the company's bulk customers. HGST has been wholly owned by WD since 2012. Prior to that, it was known as Hitachi Global Storage Technologies, following Hitachi's acquisition of IBM's former hard drive business.