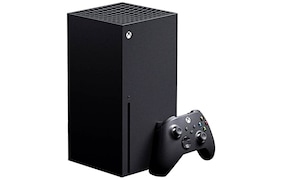 Xbox Series X isn't looking to wow you with its design. Just look at its direct rival, the PlayStation 5. Unlike Sony's swanky dual-winged dual-tone console and its matching rebranded controller, Microsoft's offering is as plain as it comes. The Series X is just a giant black box. It doesn't have any fins nor any curves. It's all flat surfaces and straight lines. The Xbox Series X looks very much like a PC cabinet you would see in an office. As for the controller, it's more or less the same — that's both good and bad. The Xbox Series X feels like a product from a company that's very confident in what it promises elsewhere.