How the X-Men are Helping Micromax Go Global 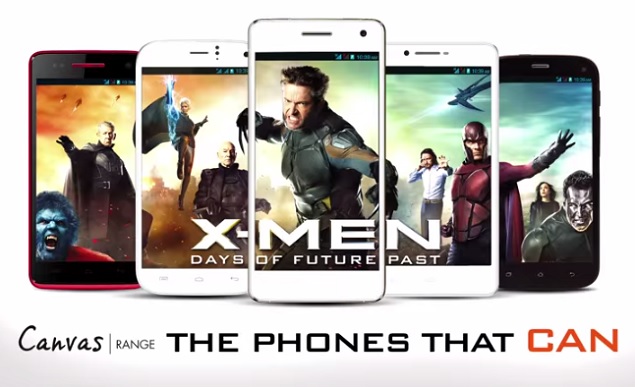 Micromax has always struggled with the label of being an "Indian" brand, and today, as the company tries to be compete with established brands globally, it is placing a big bet on marketing.

The release of X-Men: Days of Future Past on Friday was preceded with ads both online and on television which made prominent use of the movie's official trailer, mixed with the brand's phones. These ads have been playing so regularly that at this point, if you're an Indian who watches television, then the actual trailer should make you think of Micromax. At least - that's what Shubhodip Pal, Chief Marketing Officer, Micromax Informatics, hopes.

While Pal would not confirm the total spending Micromax has done on this marketing campaign, the speculation is that the amount is close to Rs 4 crore - the highest amount spent by an Indian brand on a film. While that might seem like a lot, these campaigns are particularly important for Micromax as it tries to reinvent itself as a global brand.

Palsays, "We were in talks with Fox for more than a year to set up this deal, and have spent months coordinating with them on the marketing. One thing which we felt was essential is that they don't use a differenttrailer from us when marketing the film."

In turn, Micromax used its advertising slots on various television channels to air only the ads which featured the X-Men trailer. "There was a lot of planning with Fox, which led to a strong knock-on effect for both brands. So for example, if they were advertising on Star World on Monday, we wouldn't advertise on the same day, but would run our ad the next day. In this way, the actual spends were lower but the perception was much bigger."

Whilethis ties into Micromax's marketing mantra of movies, music and sports,X-Men marks the first major Hollywood release the brand is involved with. Pal says that this is partly because of the brand's association with Hugh Jackman, one of the principal stars of the movie, but he is quick to add, "We had been tracking the movie for some time now, and themovie's tone and values seemed like a good fit for the brand."

This is a strategy which Micromax will continue to pursue. Pal says, "As long as the movie makes sense, we will do it. We've already laid out plans for some more movies, starting with Transformers [Age of Extinction], which is releasing in the end of June. But if you've been following movies on television, then you know we've also been very visible with films like Argo and the Denzel Washington movie Flight, on Star Movies."

While the company will keep investing in summer blockbusters to help position Micromax as a global brand, Pal admits that there are some perks to having the brand ambassador in the movie. As a part of the current campaign, Micromax organised a Twitter contest for Indian fans, and took the winners to Singapore where they got to meet Hugh Jackman. At the time, Jackman also tweeted to Indian fans.

However, he went above and beyond the expectations, Pal says, and even recorded a short video - something, Pal says, was not part of the original plan.

The payoff of all this? For Micromax, it is an opportunity to change the overall perception of the brand. Pal says that 16 months ago, 'cheap' and 'Chinese' were the most commonly applied descriptors to the brand. Today, he says, "Number two, affordable and Hugh Jackman make up the word wall."

This is particularly important as the brand grows into foreign markets. Micromax launched in Russia in January and while this particular campaign did not play there, Pal says that releases from September onwards will have the same campaigns across all markets including India.