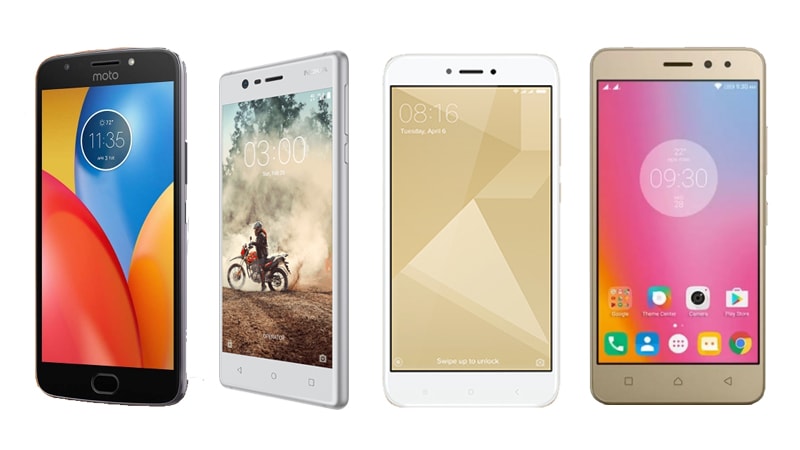 The Moto E4 Plus, with its huge 5000mAh battery in tow, has been launched in the Indian market at Rs. 9,999. Featuring 3GB RAM, Android 7.1 Nougat, selfie flash, and fingerprint sensor, the Moto E4 Plus is a feature-rich smartphone that doesn't seem to be skimping on any department. The new Moto E4 Plus will compete against the likes of Nokia 3, Xiaomi Redmi 4 and Lenovo K6 Power in India, which feature similar features and have been making waves in the budget segment for quite some time now. If you are unsure about which model is right for you, we look at the price, highlight features, and key specifications of the four to give you more clarity in your buying decision.

The highlight of Moto E4 Plus is its 5000mAh battery with fast-charging support, along with the water-repellent coating to protect it from splashes. It is also the only one in this list to run Android 7.1.1 Nougat operating system. As for the remaining Moto E4 Plus specifications, you will get a 5.5-inch HD screen, 1.3GHz quad-core MediaTek MT6737M chipset, up to 128GB microSD card support, 13-megapixel rear camera with LED flash, 5-megapixel front camera with LED flash, fingerprint sensor, 3GB RAM, and 32GB internal storage.

Nokia 3, the only Nokia Android phone available in the market right now, is aimed at buyers looking for a premium-looking smartphone with a budget price tag. It has a smaller 5-inch HD display, Android 7.0 Nougat software, the same quad-core MediaTek MT6737M chip with top clock speed of 1.4GHz, 2GB RAM, 16GB internal storage, microSD card support (up to 256GB), 8-megapixel rear and front cameras, and a 2630mAh battery. Among the handsets discussed here, it is the only one without a fingerprint sensor.

The highlight of Lenovo K6 Power is its big battery too (4000mAh), runs on Android 7.0 Nougat after a recent update, and is the only handset here with full-HD display resolution. The smartphone has a 5-inch display, 1.4GHz quad-core Snapdragon 430 SoC, 32GB storage, provision for up to 128GB microSD card, 3GB and 4GB RAM options, 13-megapixel rear camera with LED flash, 8-megapixel front camera, fingerprint sensor, and Dolby Atmos audio enhancement.

As for the popular Redmi 4 highlight, you get a 4100mAh battery, 64GB storage, and 4GB RAM. Though it launched with Android Marshmallow baked in, the handset is scheduled to get Android 7.1 Nougat in the future. The smartphone features a 5-inch HD screen, 1.4GHz quad-core Snapdragon 435 processor, storage expansion up to 128GB, 13-megapixel rear camera with LED flash, 5-megapixel front camera, and fingerprint sensor.

You can buy the Nokia 3 from offline stores only (though Croma has listed it on its online store), both Moto E4 Plus and Lenovo K6 Power are exclusively available on Flipkart, and Xiaomi Redmi 4 can be purchased from Amazon India and Mi.com via flash sales and the new pre-order system.

So, did this comparison help you decide which among the four is the right smartphone for you? Let us know your choice in the comments below.