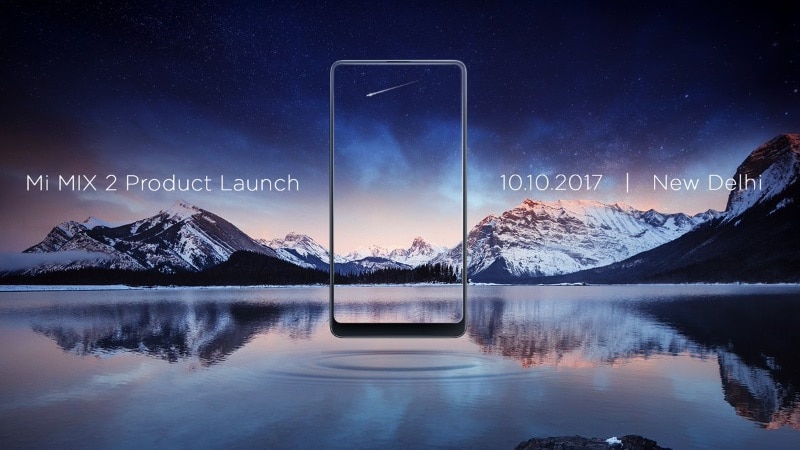 Xiaomi launched the bezel-less Mi MIX 2 in India on Tuesday priced at Rs. 35,999. Powered by the Snapdragon 835 alongside 6GB of RAM, and a 5.99-inch 18:9 full-HD+ display, the phone is the global successor to last year's concept Mi MIX that was only launched in China. The Mi MIX 2 has support for 43 LTE bands to allow you to take the phone anywhere you like.

Owing to its design, the 5-megapixel front camera on the Mi MIX 2 is placed at the bottom, and the ear speaker is located on the back using a 'hidden sound-guided' one that resonated sound through the display. There's a 12-megapixel sensor at the back, a 3,400mAh battery inside, and dual-SIM support. The Mi MIX 2 will be available via Flipkart and Mi.com in a "preview sale" on October 17, with a general sale in the first week of November.

OnePlus 5T with 18:9 display might be a thing
According to a report by GizmoChina, OnePlus will launch a modified version of its latest flagship in the OnePlus 5T, just like it did with the OnePlus 3. But it apparently won't be just a spec bump as seen with the 3T, as it will move beyond the 5.5-inch full-HD display to include a 6-inch 18:9 full-HD+ screen. And as has become the new norm for phones, the 5T will apparently also have thin bezels. The OnePlus 5T is tipped to come out five months after the original's launch, so that's November.

Oppo F5 will launch on October 26
Oppo is planning to launch the F5 on October 26, the company has announced on its Philippines Facebook page. As per other leaks and Oppo's own post, the phone is expected to have dual 16-megapixel cameras on the front, a 20-megapixel rear camera, a 6-inch 18:9 display, the Snapdragon 660, 6GB RAM, 64GB internal storage, and a 4000mAh battery.

The Jio offer includes up to 100GB of additional 4G data, though the exact terms have yet to be revealed. All these offers will be only available in offline stores, between October 14-21.

Meanwhile, Paytm and Yes Bank have partnered to offer discounts on the newest iPhone models, the 8 and the 8 Plus. The former is offering Rs. 9,000 cashback to all customers on purchase of iPhone 8 and iPhone 8 Plus from its website or app, an additional Rs. 6,000 if you've a Yes Bank credit card.

Meanwhile in India, Samsung has launched the budget tablet – the Galaxy Tab A (2017) - priced at Rs. 17,990. It has an 8-inch 1280x800 TFT display, runs Android 7.1 Nougat, and has 4G support. It is already available for purchase from Samsung's website and offline retailers across the country.

Nokia cuts 310 jobs and shuts VR camera development
Nokia plans to cut a total of 310 jobs in Finland, the US, and the UK, as well as halt development on the virtual reality camera Ozo. It cited "slower-than-expected development of the VR market" as the reason for the latter, and said would "focus more on technology licensing opportunities". Nokia doesn't have anything to do with the new Nokia phones now in the market, which are rather made by fellow Finnish company HMD Global.

iPhone 8 sales cross expectations, iPad Pro to get Face ID, iOS 11.1 beta 2 released
KGI Securities analyst Ming-Chi Kuo has said that iPhone 8 sales have been "better than expected", though he didn't state what the original expectation had been, and whose expectation had been exceeded: Apple's, or Kuo's himself. He also reiterated the limited availability of iPhone X when it arrives next month, and added the iPhone won't have a "true super cycle" until 2018, owing to camera production issues, longer sales period for new phones, and because they'll more competitive.

Kuo has also claimed Apple will bring its face recognition technology Face ID to iPad Pro tablets next year, in a further attempt to differentiate the iPad line-up. As an example, the Smart Keyboard and Apple Pencil are already exclusive to the iPad Pro models.

Meanwhile, Apple released the second beta of iOS 11.1 to developers on Tuesday, which features the return of 3D Touch app switching gesture that had been removed with iOS 11. It allows users to call up the app switcher by pressing down hard on the left edge of the iPhone screen, and then swiping to the right.

Elon Musk doesn't approve of Google Clips
Elon Musk is not a fan of Google's new AI camera Clips, and he made that clear in a tweet over the weekend. In response to a video demonstrating what Clips is capable of, Musk said: "This doesn't even seem innocent." For what it's worth, Google has said that Clips will light up when it's recording, and doesn't take pictures or videos until it sees a face it recognises.

Facebook India MD quits
Facebook India MD Umang Bedi has decided to leave the company, merely a year after arriving on board. He will stay for another three months to ensure a smooth transition. Bedi hasn't announced if he's planning to join another company. Sandeep Bhushan, director of consumer and media businesses for South Asia, has been appointed as the interim MD.