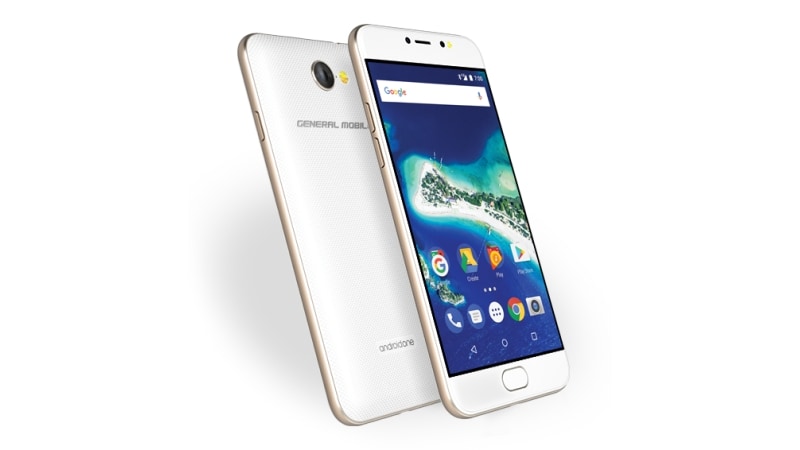 General Mobile, the Turkish smartphone manufacturer with operations in nearly 20 markets, as expected on Tuesday at MWC 2017 launched its latest Android One smartphone - the GM 6. While the company revealed the smartphone itself alongside specifications, it has yet to detail availability or price.

The General Mobile GM 6 runs Android 7.0 Nougat without any customisation, and features a 5-inch HD (720x1280 pixels) IPS display with a pixel density of 294ppi and Corning Gorilla Glass 4 protection. It is powered by a 1.5GHz quad-core MediaTek MT6737T SoC that is coupled with 3GB of RAM.

The GM 6 bears a 13-megapixel rear autofocus camera with dual-LED flash, and on the front, sports a 8-megapixel camera with selfie flash. As for storage, the smartphone comes with 32GB of inbuilt storage that is expandable via microSD card (up to 128GB).

Connectivity options on the General Mobile GM 6 include 4G LTE + 4.5G, Wi-Fi 802.11 b/g/n, Bluetooth v4.2, GPS/ A-GPS, and a Micro-USB port. Sensors on board include an accelerometer, ambient light sensor, gyroscope, magnetometer, and proximity sensor. It also includes a fingerprint sensor on the home button, and the company says it can detect fingerprints within 0.2 seconds.

The General Mobile GM 6 measures 144x71.3x8.6mm, and weighs 150 grams. It will be available in Gold, Rose Gold, and Space Grey colour variants.

Tuesday's launch indicates that there is still some life left in Google's Android One initiative, though the Turkish manufacturer may be one of the only companies still making phones for it.

Delhi to Mumbai in 80 Minutes? Hyperloop One’s Vision Is Great, but Don’t Get Too Excited
Xbox Game Pass Grants Unlimited Access to Over 100 Xbox One and Xbox 360 Games for Rs. 699 a Month