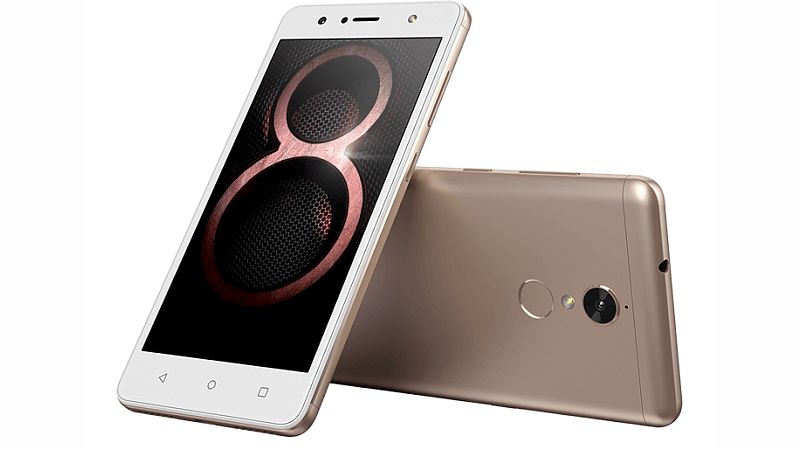 Lenovo, after launching the K8 Note and K8 Plus, has now launched the third K8-series smartphone, the K8. As expected, the Lenovo K8 is the lowest specced smartphone in the series, and is priced at Rs. 10,499. Unlike the other two Lenovo K8-series smartphones, the all-new Lenovo K8 was announced via Twitter. The smartphone will be an offline-exclusive and is now available to buy via retail stores.

The Lenovo K8 is the only smartphone in the series which doesn't sport a dual camera setup. At the back, there's a 13-megapixel single sensor with PDAF and LED flash. To compare, the Lenovo K8 Note sports a 13-megapixel primary sensor along with a 5-megapixel depth sensor, which allows the smartphone to capture depth-of-field effects. The K8 Plus also comes with a similar dual camera setup.

The Lenovo K8 is powered by an octa-core Mediatek Helio P20 processor clocked at 2.3GHz coupled with 3GB of RAM. There's 32GB inbuilt storage on board which can be further expanded. It features a 5.2-inch IPS HD (720x1280 pixels) display with 2.5D glass. The smartphone sports a fingerprint scanner at the back. The Lenovo K8 also sports an 8-megapixel front camera with front flash.

Similar to the other two Lenovo K8-series smartphones, the new K8 also runs on stock Android 7.1.1 Nougat out-of-the-box. It packs a 4000mAh non-removable battery which the company claims can deliver up to 1.5 days of usage. It measures 147.9x73.7x8.5mm and weighs 165 grams. It comes with a single speaker that is powered by Dolby Atmos. The Lenovo K8 also comes with a dedicated Music Key located on the left panel. The dual-SIM smartphone supports both Nano-SIMs and comes with 4G with VoLTE support. It will be available in Venom Black and Fine Gold colours.

Government Sets Up Body for 5G, Eyes Rollout by 2020
Google Assistant Gets New Search Bar to Find All Its Integrations