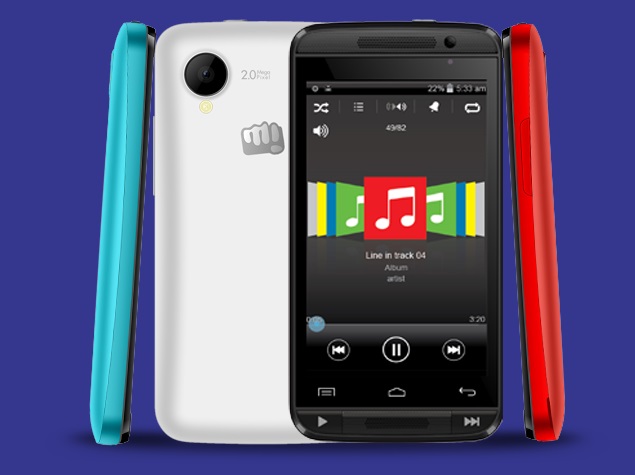 The Micromax Bolt A082, after going on sale via an e-commerce website last month at Rs. 4,399, has now been officially listed on the company's site.

There is no official word on the pricing and availability details of the Micromax Bolt A082; though, we expect that the company will be announcing the smartphone in the coming days. Last week, Micromax listed two new smartphones, the Canvas 4 Plus and Bolt A064.

The Micromax Bolt A082 runs Android 4.4.2 KitKat out-of-the-box, like other recent Micromax smartphones such as the Canvas XL2, Bolt A065, and Canvas Knight Cameo A290.

The smartphone comes with 4GB of inbuilt storage, which is further expandable via microSD card (up to 32GB). The Bolt A082 sports a 2-megapixel rear camera with LED flash, while there is a secondary 0.3-megapixel front-facing camera also onboard.

On the connectivity front, the Bolt A082 offers GPRS/ EDGE, Wi-Fi 802.11 b/g/n, Micro-USB, and Bluetooth 4.0 options. Unfortunately, there is no 3G connectivity support on the handset. The smartphone packs a 1700mAh battery, which is rated to deliver up to 7 hours of talk-time and 160 hours of standby time.

The official site notes that the Bolt A082 will be available in 5 colour options - Electric Grey, Raging Red, Pristine White, Sunshine Yellow, and Cyan Blue.