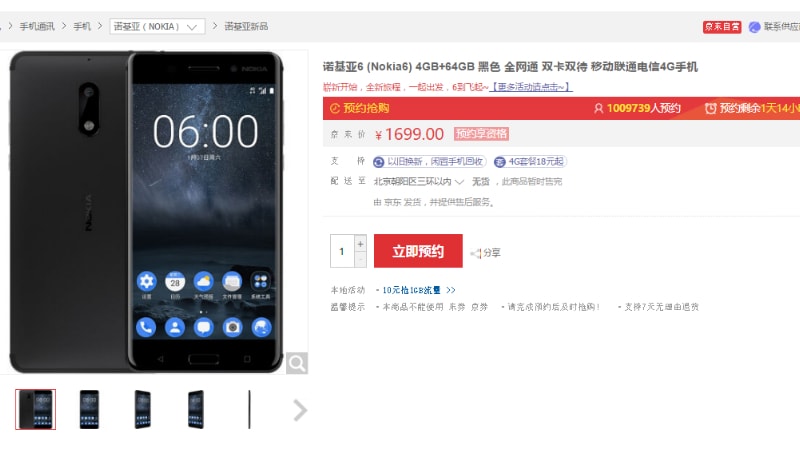 The nostalgia factor for the Nokia brand name seems to be working in favour of HMD Global as its new Nokia 6 smartphone has amassed over 1 million registrations for its first flash sale. The first Nokia 6 flash sale will be held on January 19 on JD.com; the smartphone will be available only in China. The smartphone had 250,000 registrations within 24 hours on the Chinese e-commerce website.

As anticipated, the smartphone has received plenty of interest in China ahead of its January 19 flash sale. The device managed to garner in the first 24 hours on JD.com, and now over 1 million people have registered to buy it - as seen on the retailer's website. This milestone is huge for and HMD Global as well, as it testifies the number of loyalists that still exist for the venerable brand.

The first smartphone with Nokia branding in 3 years, Nokia 6 is a mid-range smartphone priced at CNY 1,699 (roughly Rs. 17,000), rather high considering the specifications. Just three days ago, Nokia 6 had managed to rake in 500,000 registrations, and has crossed the one million registration milestone in record time.

Nokia 6 sports a 5.5-inch full-HD display with a 2.5D Gorilla Glass on top. It is powered by a Snapdragon 430 SoC coupled with 4GB of RAM and 64GB of internal storage. The dual-SIM Nokia 6 smartphone comes with a 3000mAh non-removable battery with fast-charging support.

HMD Global is looking to launch a slew of Nokia-branded Android smartphones this year, and some of them will be unveiled on February 26 itself - ahead of MWC 2017.