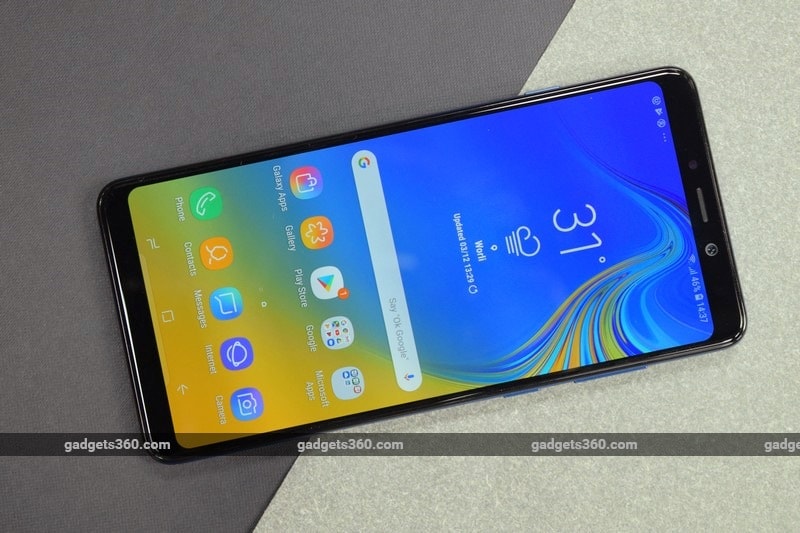 Mumbai-based Mahesh Telecom first reported the latest price cut through a tweet posted on Friday, and as we mentioned, we've managed to independently confirm the price cuts.

Amazon.in has already listed the Galaxy A7 (2018) and Galaxy A9 (2018) with the new prices. However, Flipkart and the Samsung India e-Store were still showing the old price tags at the time of filing this story, but should soon reflect the new prices.

Last month, Samsung dropped the prices of the Galaxy A6+ and Galaxy A8 Star in India. The South Korean company also made its Galaxy J6+ and Galaxy J8 more affordable than before.

The dual-SIM (Nano) Samsung Galaxy A7 (2018) runs Android 8.0 Oreo with Samsung Experience 9.0 on top. The smartphone sports a 6-inch full-HD+ (1080x2220 pixels) Super AMOLED Infinity Display with an 18.5:9 aspect ratio and comes with Gorilla Glass 3 protection. Under the hood, there is an octa-core Samsung Exynos 7885 SoC clocked at 2.2GHz, paired with 4GB and 6GB RAM options.

For storing content, the Samsung Galaxy A7 (2018) comes with 64GB and 128GB storage options that both are expandable via microSD card (up to 512GB). Connectivity options on the smartphone include 4G VoLTE, dual-band Wi-Fi 802.11ac, Bluetooth v5.0, ANT+, NFC with Samsung Pay support, GPS, GLONASS, Beidou, and a 3.5mm headphone jack.

Sensors on board are an accelerometer, gyroscope, proximity sensor, RGB light sensor, and a side-mounted fingerprint sensor. Lastly, the smartphone packs a 3,300mAh battery and measures 159.8x76.8x7.5mm.

The dual-SIM (Nano) Samsung Galaxy A9 (2018) runs Samsung Experience UX based on Android Oreo and features a 6.3-inch full-HD+ (1080x2220 pixels) Infinity Display that has a Super AMOLED panel and an 18.5:9 aspect ratio. It is powered by an octa-core Qualcomm Snapdragon 660 SoC that has four cores clocked at 2.2GHz and four cores clocked at 1.8GHz. This is coupled with 6GB and 8GB RAM options.

In terms of capturing selfies and video chat, the Galaxy A9 (2018) has a 24-megapixel sensor at the front that comes with an f/2.0 aperture. The front-facing sensor also enables a preloaded Face Unlock feature.

The Galaxy A9 (2018) comes with 128GB on internal storage that is expandable via microSD card (up to 512GB). On the connectivity front, the phone has 4G VoLTE, Wi-Fi 802.11ac, Bluetooth v5.0, USB Type-C, NFC, and a 3.5mm headphone jack. Onboard sensors include an accelerometer, ambient light sensor, gyroscope, magnetometer, proximity sensor, and an RGB light sensor. There is a fingerprint sensor at the back. At last, there is a 3,800mAh battery that supports fast charging.