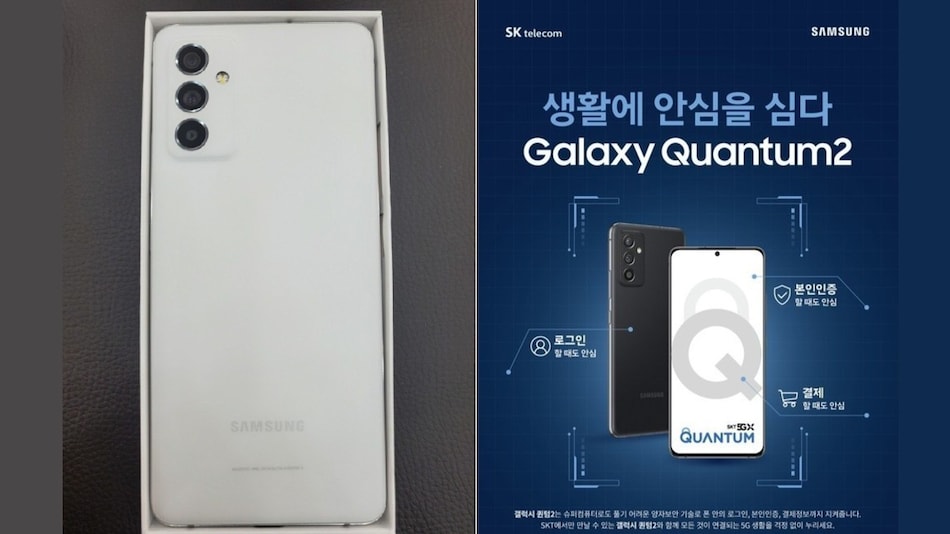 Samsung Galaxy Quantum 2 full specifications and pre-order dates have been leaked. The smartphone is expected to launch as the Samsung Galaxy A82 5G in some markets and will be rebranded as Galaxy Quantum 2 for the South Korean carrier SK Telecom's network, as per a report. It is likely the successor of the Galaxy A Quantum handset that was launched with quantum encryption technology last year. The development comes a day after live images and launch date of the rumoured smartphone were leaked online.

According to the tipster, the Samsung Galaxy Quantum 2 will be available for pre-order on April 13 and will launch on April 23. However, there is no information about the markets it will debut in. It is also tipped that Samsung will give away a pair of Galaxy Buds Live and a clear case, as a pre-order gift.

As far as specifications, the tipster says that Samsung Galaxy Quantum 2 aka Galaxy A82 5G will sport a 6.7-inch Super-AMOLED full-HD+ (1,080x2,400 pixels) Edge display with 120Hz refresh rate and 800 nits brightness. The live images showed the phone having a central hole-punch cutout. The smartphone is also claimed to feature an in-display fingerprint sensor.

Under the hood, the Samsung Galaxy Quantum 2 aka Galaxy A82 5G is said to feature the Qualcomm Snapdragon 855+ SoC, paired with 6GB of RAM and 128GB of storage. A previous report said that the phone will come equipped with a Quantum Random Number Generator (QRNG) chip to increase the encryption of the data on the device.

In the optics department, the Samsung Galaxy Quantum 2 aka Galaxy A82 5G is claimed to feature a 64-megapixel primary sensor in the triple rear camera setup. This camera is said to come with optical image stabilisation. The handset is claimed to pack 4,500mAh battery with 15W charger included in the box. Reportedly, the phone will support 25W fast charging.

Other features of the smartphone include Samsung Pay with Magnetic Secure Transmission (MST), IP67 water and dust resistance rating, Dolby Atmos, and a dedicated microSD slot to expand the onboard storage. The phone is said to weigh 203g, and the retail box may come with a case, and wired earphones.