Samsung Galaxy Quantum 2 may be powered by a Qualcomm Snapdragon 855+ SoC. 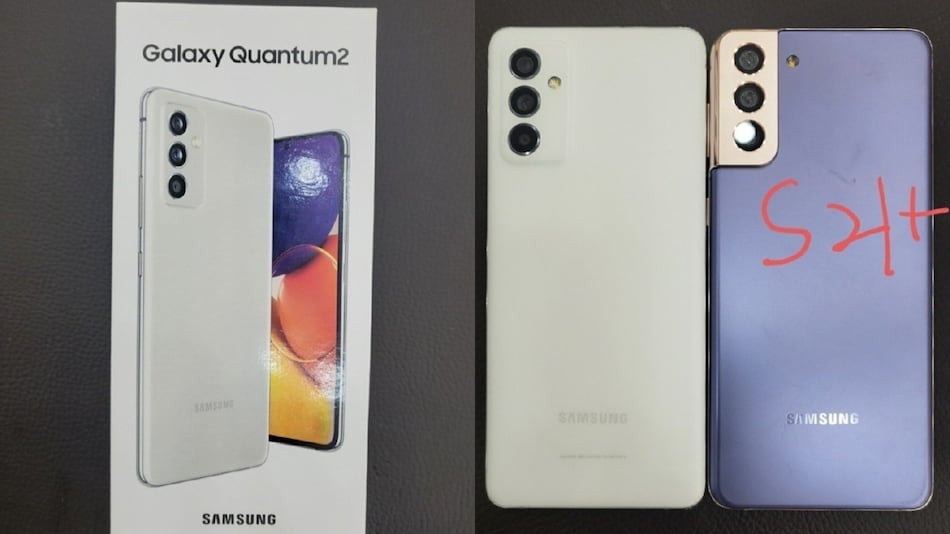 Samsung Galaxy Quantum 2, said to launch as Galaxy A82 5G in some markets, will be launched on April 23 in South Korea, as per a report. The smartphone is expected to be the successor of the Galaxy A Quantum handset that was launched with quantum encryption technology last year. Live images of the rumoured smartphone have now leaked online, revealing its design and key specifications. The phone may be powered by a Qualcomm Snapdragon 855+ SoC.

The images of the rumoured Samsung Galaxy Quantum 2 have been leaked by South Korean blog Naver.com, and also shared by tipster Mukul Sharma. The report by Naver claims that the phone will launch on April 23 in South Korea and have the same design as the Samsung Galaxy S21+ but a full-HD+ display. The report further says that the Galaxy Quantum 2 has the model number SM-A826, which is also believed to be of the Galaxy A82 5G that was recently spotted on Bluetooth SIG and Geekbench listings. The Bluetooth SIG site listed the phone with Bluetooth v5 and the Geekbench listing suggested it will run on Android 11.

As far as the specifications are concerned, the processor associated with the alleged Samsung Galaxy Quantum 2, aka Galaxy A82 5G, is codenamed “msmnile”, which has been associated with the Snapdragon 855+ SoC. The report by Naver also says that the Samsung smartphone in question will be powered by a Snapdragon 855+ SoC, and the live images show that the smartphone will pack 6GB of RAM and 128GB onboard storage. The information about the phone's SoC and RAM were also previously revealed via its Geekbench and Google Play listing spotted by 91Mobiles.

Coming to the camera, the report by Naver says the primary snapper in the triple rear camera setup of the Samsung Galaxy Quantum 2 will be a 64-megapixel sensor. The rumoured Galaxy A82 (4G variant) will also reportedly have a 64-megapixel rear primary camera, said to be a Sony IMX686 sensor and not Samsung's ISOCELL GW1 sensor.

The report also said that the rumoured Galaxy A82 is not intended for the European market but for Samsung's home market of South Korea. The phone is also said to feature a Quantum Random Number Generator (QRNG) chip to increase the encryption of the data on the device.