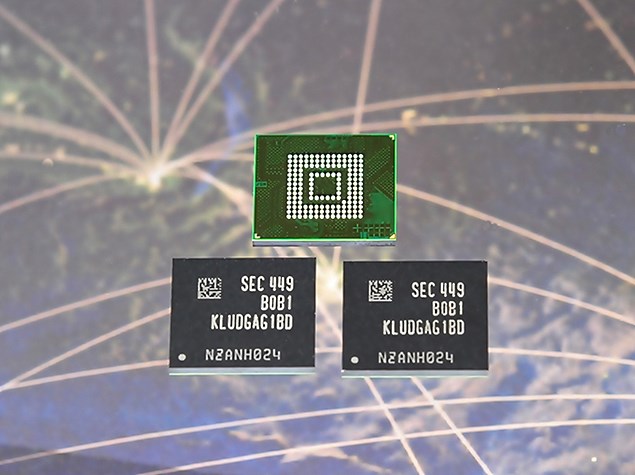 Samsung on Thursday announced that it is now mass producing ultra-fast 128GB flash memory modules, based on the Universal Flash Storage (UFS) 2.0 standard for next-generation flagship smartphones, hinting at inclusion in the upcoming Galaxy S6 and Galaxy S6 Edge a.k.a Galaxy S Edge - expected on March 1.

To remind you, Samsung in its first teaser video of the "Next Galaxy" had words such as "the faster I am", "the more that gets done", "And the more time I can give to others", hinting at the performance - which as we know is not just linked to the processor only, but many other factors including display resolution, RAM, flash memory, OS and more. Interestingly, a report on Tuesday also tipped the device to come in three storage variants, which included the 128GB inbuilt storage option along with 32GB and 64GB. Alongside, an image leak indicated the lack of a microSD card slot.

Announcing modules based on the new UFS standard, Samsung said that the new memory modules will be available in 32GB, 64GB, and 128GB sizes, and if we look at the timing of the announcement, all three can very well be seen in the three tipped storage variants of the Samsung Galaxy S6.

The company says that the ultra-fast UFS embedded memory package is a new ePoP (embedded package on package) solution that can be stacked directly on top of a logic chip, taking approximately 50 percent less space. It conducts 19,000 input/output operations per second and is 2.7 times faster than eMMC 5.0, which is currently embedded in high-end smartphones.

"For random writing of data to storage, the blazingly fast UFS embedded memory operates at 14,000 IOPS and is 28 times as fast as a conventional external memory card, making it capable of supporting seamless Ultra HD video playback and smooth multitasking functions at the same time, enabling a much improved mobile experience," said company.