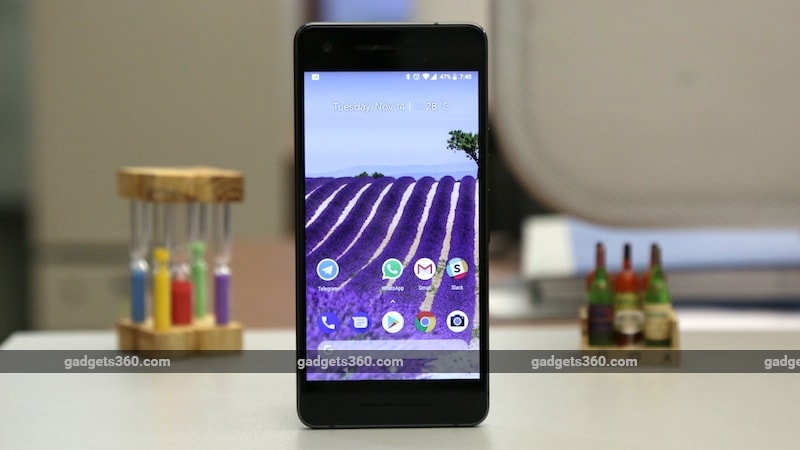 The Google Pixel 2 has seemed liked the neglected child since launch. It didn’t get the fancy 18:9 display as its bigger brother and is pretty much absent from most of Google’s offline marketing materials, which puts the Pixel 2 XL front and centre. We get it, after all, the Pixel 2 XL is the prettier looking of the two and commands a higher premium, so we guess it makes sense for Google to give it maximum visibility. However, Google’s more expensive offering has been having its fair share of issues ever since it launched, which has cast a sort of bad aura around it. That’s not to say the Pixel 2 is immune to these issues, but at least most of them seem to be fixable through software.

At the end of the Pixel 2 XL review, we said that the Pixel 2 might just be the better choice of the two. It still costs a good premium at Rs. 61,000, which puts it head on with the Apple iPhone 8, but more than its Android counterparts like the Samsung Galaxy S8. With the Pixel 2, you get pretty much the same specifications as the XL, but a smaller display and battery. However, with potentially lesser issues to deal with, let’s see if it’s still worth the premium.

Design wise, the Pixel 2 isn’t much of a looker. The back still looks a bit boring like the XL and, sadly, the front isn’t any better. Built by HTC, the phone feels extremely sturdy when you hold it thanks to the aluminium body and the Just Black variant that Google sent us has the same grippy texture as the XL. The Pixel 2 also gets an exposed aluminium front edge around the display, which looks nice but the effect is marred a bit by the visible antenna bands. There are seven of them scattered around the corners of the phone, which ruins the aesthetics a bit.

The thick black borders around on the top and bottom of the display don't exactly scream 2017, and remind us a lot of last year's Pixel design. However, this time, Google has given the lower chin a reason to exist as the second speaker is fitted here. We absolutely loved the form factor of the original Pixel, which the Pixel 2 offers too, but it somehow doesn’t feel as compact as the earlier one. Thankfully, the thickness of the Pixel 2 is even across the entire body and doesn’t taper towards the bottom like the first one.

The single SIM tray is on the left while the Type-C port is placed at the bottom. There’s no 3.5mm headphone socket here either. The power and volume buttons are placed on the right and are within easy reach of your thumb, however, the tactile feedback of the volume button is poor. There’s barely any play so it requires a bit more effort to use. The 5-inch display uses an AMOLED panel, with a full-HD resolution and a 16:9 aspect ratio. The panel is rated to support 95 percent of the DCI-P3 colour gamut (compared to 100 percent on the Pixel 2 XL) but despite that, colours look a bit better right out-of-the-box compared to its big brother. Google’s new patch also introduces a new Saturated colour mode, which boosts the colours to Samsung’s Super AMOLED levels. You’ll be happy to know that the Pixel 2 doesn’t have the blue tint issue that’s prevalent on the Pixel 2 XL, which was one our biggest annoyances with the bigger phone.

The on-screen navigation buttons also auto-dim now, which was done to prevent the image retention issue on the Pixel 2 XL. Users have also been reporting a ‘black crush’ display issue, where the display is unable to decipher the darker shades of black. We didn’t face this on our unit although we noticed a bit of banding in the deeper black levels, which is visible when viewing a gradient chart. The fingerprint sensor works well and is easy to reach. In the box, the Pixel 2 ships with a Type-C to Type-C cable, power adapter, Quick Switch adapter, USB Type-C to 3.5mm adapter, SIM eject tool, and instruction leaflets.

The specifications are nearly identical to the Pixel 2 XL. You get a Qualcomm Snapdragon 835, octa-core SoC, 4GB of RAM and a choice of either 64GB of 128GB of onboard storage. There isn’t any microSD card slot for expanding the storage. The Pixel 2 is also IP67 certified for dust and water resistance, and features NFC and front-firing stereo speakers. 4G VoLTE is also supported here. The phone also has the  Active Edge feature, which involves summounig Google Assistant by squeezing the pressure sensitive sides. There’s dual-band Wi-Fi ac, Bluetooth 5 and support for four satellite systems for location tracking.

Software is identical to the Pixel 2 XL too. You get vanilla Android 8.0 Oreo with the new refreshed home screen and launcher. Other features that we’ve talked about in detail in our Pixel 2 XL review are also present, like the Now Playing and Google Lens. We’ve also covered the top new features of Android Oreo, which you can read about here.

The Pixel 2 is just as snappy a performer as its bigger brother. However, due to its smaller size and lesser weight, it’s a lot more comfortable for one-handed use. It’s a slight stretch to access the notification shade with your thumb, without needing to shuffle the phone around a bit. Thankfully, you can always resort to the fingerprint sensor to access it as well.

Multitasking is handled very well and we didn’t face any slow downs or stutter during heavy usage. The full-HD display is still plenty sharp for viewing webpages and colours are punchy with the newly added setting. However, we do wish Google would have gone with a higher resolution, which is what a proper flagship at this price level ought to have in our opinion.

Call quality is very good and we didn’t have any trouble with 4G reception during our commute around the city. The earpiece and the bottom speaker work together to provide a stereo effect. We noticed that the mid-range frequencies are give more emphasis here compared to the XL, making the volume seem louder. The Pixel 2 XL has a warmer tone as it focuses more on the low end but lacks detail in the mid range. The standard 16:9 display also has its advantages as you can use up all of the screen space, without having to crop parts of the video. The screen does smudge pretty easily during everyday use, which can be annoying.

The camera is identical to the Pixel 2 XL, which includes a 12.2-megapixel rear camera with OIS, laser autofocus and an 8-megapixel front-facing camera. Focusing speeds are super quick and there’s no perceptible shutter lag even with HDR+ enabled. In fact, we found the autofocus speeds to be a bit better than even the iPhone X, in low light. Landscapes shots have great detail and the near-zero shutter lag means it's easy to get sharp, in-focus shots even when you're moving about. Macros are handled very well too, with good depth of field. You can enhance the bokeh with Portrait mode, which works just as well  as it does on the Pixel 2 XL.

Dynamic range is very good in low light shots, with excellent details for close ups. Landscapes do exhibit a bit of noise but it's not too bad. Skin tones are always accurately represented in low light, which tends to veer more towards the cooler side. The front 8-megapxiel sensor is equally competent and portrait selfies look great even under dim, artificial lighting. Video recording maxes out at 4K, but once again, at only 30fps. Stabilisation is improved greatly from the first Pixel, thanks to OIS. When shooting under bright sunlight, colours can look oversaturated but details are very good. However, there is a bit of visible noise in low light videos, just like we encountered with the first Pixel.

Battery life is surprisingly decent for a 2700mAh capacity. We managed to squeeze out a full day's worth of regular use. However, this was with an average screen-on time of just 2 hours, which isn't the best. With heavier usage, like video recording and gaming, it might be tough to get an entire day here. We did manage to get a good runtime in our HD video loop test though, which lasted for 12 hours and 9 minutes. Compared to the 12 hours and 43 minutes that we recorded on the Pixel 2 XL, this isn’t too shabby.  Fast charging also works very well, giving you about 90 percent charge in about an hour.

After testing both phones, it’s clear that the Pixel 2 is the safer choice of the two. Sure, you lose out on a bit of screen real estate and aesthetics, but in turn, you get a better quality display which lacks most of the (sometimes) deal-breaking issues of the Pixel 2 XL. Other than that, you get the same performance, the same great cameras, and the promise of timely updates from Google. If you’re looking for a higher resolution display and advanced features like wireless charging in the Android space, then look no further than the Samsung Galaxy S8. The iPhone 8 is also an excellent alternative to the Pixel 2, which retails around the same price as the Pixel 2.

If you’re already knee-deep in the Google ecosystem and are neurotic about updates, then the Pixel 2 is the smartphone to get.