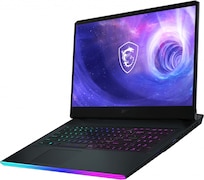 Laptops featuring high-end 12th Gen Intel Core CPUs have started showing up in stores in India, and gamers can get the first taste of this new hardware right now. With consistent competition from AMD over the past few years, plus Apple's shift to its own in-house M1 Pro and M1 Max processors, Intel has a lot to prove in the premium laptop space. The biggest change with the 12th Gen lineup is a move to a heterogenous architecture with multiple CPU core types. We've already seen how this changes things for high-end desktops, and now it's time to talk about our first experience with a laptop powered by one of these CPUs.

MSI has chosen the most powerful available components for the Raider GE76-12UHS. That includes an Intel Core i9-12900K CPU based on the 'Alder Lake' architecture with differentiated P-cores and E-E-cores, as well as an Nvidia GeForce RTX 3080 Ti GPU. MSI offers displays ranging from 1080p 360Hz to 4K 120Hz. Indian retail units have 32GB of DDR5 RAM and a 1TB PCIe 4.0 SSD. Performance in games is phenomenal and there was no stuttering whatsoever on this review unit, which had the 1080p 360Hz display option. General content creation benchmarks also showed major performance uplift compared to the previous generation of CPU.

MSI has gone with a bold RGB light strip across the entire front, plus per-key RGB keyboard backlighting. This laptop is comfortable enough to use, but gets quite hot under heavy load. It weighs 2.9kg which is not too heavy to carry around. All this hardware comes at a huge price though, and it won't be long before the next generation ups the ante again.