Researchers from Indian Institute of Science in Bengaluru collaborated with ISRO for the 'space bricks' project. 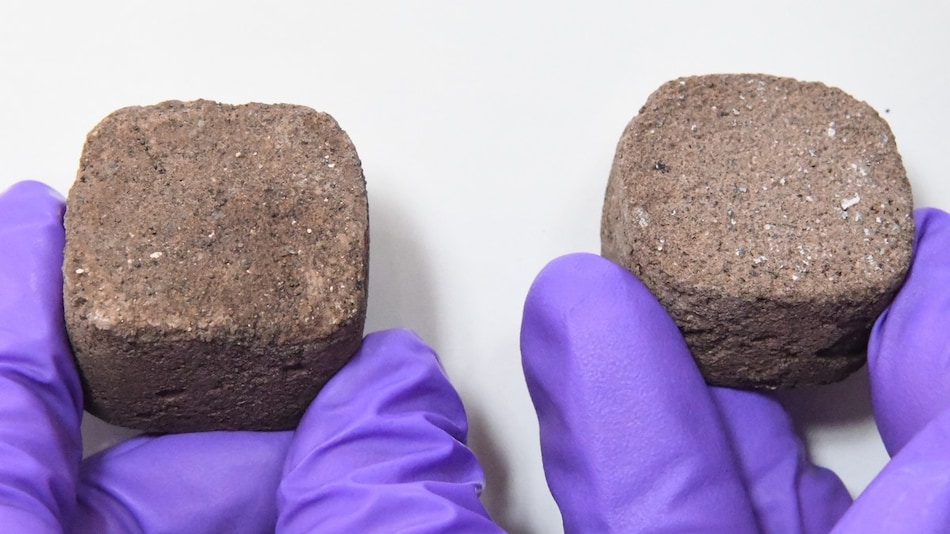 The bricks are created by mixing Martian soil with guar gum, a bacterium, and more

Humans will require spaces to live in if they are to be sent to planets like Mars. So, the Indian Institute of Science (IISc) in Bengaluru has collaborated with the Indian Space Research Organisation (ISRO) to develop a prototype for Martian and lunar soil bricks to be used in the construction of habitats for human settlements on the Red Planet. The team demonstrates how “space bricks” for constructing a habitat on Mars could be manufactured using a combination of indigenous Martian soil, bacteria, and urea, a waste chemical removed by mammals through urine. These “space bricks” may then be used to construct structures on Mars, potentially making human colonisation easier.

To make the "space bricks", the researchers first created a slurry of simulated Martian soil with guar gum - a product of processed guar beans - urea, nickel chloride, and the bacterium Sporosarcina pasteurii.This is mixed, and the slurry can be poured into moulds of any shape. The bacteria then convert the urea into calcium carbonate crystals over the course of a few days. These crystals, in combination with biopolymers generated by bacteria, serve as the cement that holds soil particles together.

According to a statement, the researchers had previously tried to build “space bricks” with simulated lunar soil, but they could only produce cylindrical bricks. However, with their new Martian method, which involves hardening a slurry mix in a mould, they can make bricks of any shape.

“The bacteria seep deep into the pore spaces, using their own proteins to bind the particles together, decreasing porosity and leading to stronger bricks,” said Aloke Kumar, Associate Professor in the Department of Mechanical Engineering at IISc, and one of the authors of the paper.

About the addition of nickel chloride, Kumar said, “In the beginning, our bacteria did not grow at all. Adding nickel chloride was the key step in making the soil hospitable to the bacteria.”

The findings were published in the journal PLOS One in its April 14 edition.

The research team intends to look into how Mars' atmosphere and low gravity could affect the strength of the “space bricks”. The Martian atmosphere is 100 times thinner than Earth's, and it includes more than 95 percent carbon dioxide, which might have a big impact on bacterial growth. The researchers built a device called MARS (Martian AtmospheRe Simulator) that consists of a chamber to simulate the atmospheric conditions found on Mars in the lab.