The image offers a view of the Great Red Spot, which is a famous and huge storm capable of swallowing Earth. 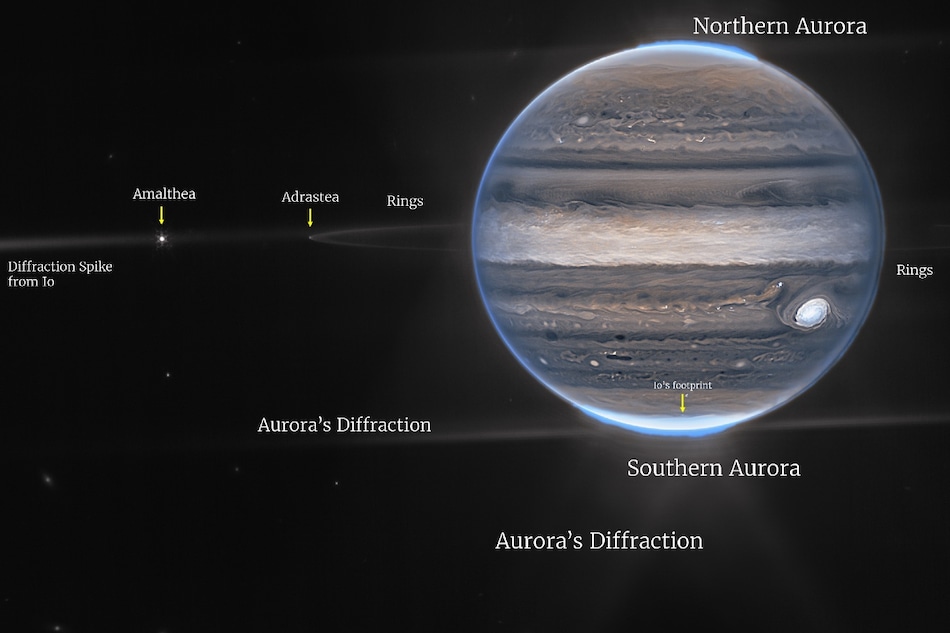 NASA's James Webb Space Telescope (JWST), hailed as the world's largest and most powerful telescope, has captured some intriguing photos of Jupiter. Apart from powerful winds and giant storms, the new images also feature some magnificent auroras on the gas giant. The pictures offer some intricate details of Jupiter that scientists think may shed more light on its inner life. The Near-Infrared Camera (NIRCam) of the observatory was used to capture the images. With three specialised infrared filters, the instrument delivers detailed data on the planet. However, infrared light isn't visible to the human eye and thus, scientists processed the captured light, bringing it under the visible range.

A standalone picture of Jupiter was produced by stitching together several images from the Webb telescope. It shows the auroras extending to high altitudes of the planet above both the northern and southern poles. The auroras appear bright as they shine in the filter which is mapped to redder colours.

The image also highlights the light reflected from the lower clouds and upper hazes on Jupiter. Hazes are also seen swirling around the northern and southern poles in a different filter, mapped to greens and yellows. Another filter, mapped to blue, shows light reflected from a deeper main cloud. The colours are due to the mapping done by scientists. The longest wavelengths appear redder while the shortest of wavelengths appear blue in the images.

The image also offers a view of the Great Red Spot, which is a famous and huge storm capable of swallowing Earth. The spot and its clouds appear white in the image as they reflect a lot of sunlight.

The wide-field view of Jupiter features the faint rings that are a million times fainter than the planet itself. Its two tiny moons, Amalthea and Adrastea, also pop up in the image.