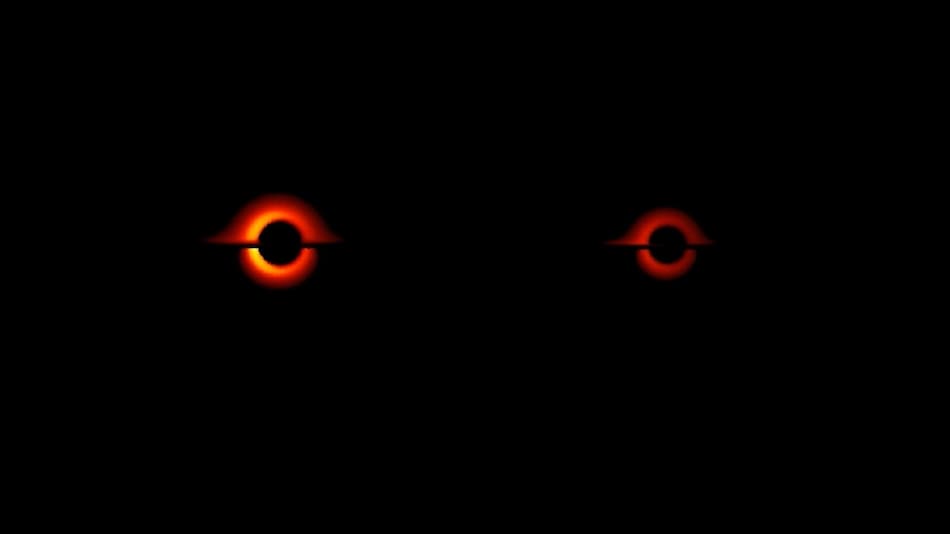 The first ever photograph of a black hole — a fiery ring of light that surrounded a black pit of emptiness — stunned the world three years ago. The Event Horizon Telescope, a global network of synchronised radio dishes serving as one large telescope, brought that image of the black hole at the centre of galaxy Messier 87 into focus. Now, two Columbia University researchers have invented a method of observing into the void that may be more convenient. With this new development, astronomers may be able to study black holes smaller than Messier 87 in galaxies further away.

There are only two criteria for this approach. To begin, there has to be a pair of merging supermassive black holes. Second, this pair must be approached from a nearly side-on angle. From that point, one should be able to witness a bright flash of light as one black hole passes in front of the other. The luminous ring of the black hole farther away is magnified by the black hole nearest to the observer, a phenomenon known as gravitational lensing.

The lensing effect is well-known, but the researchers detected a hidden signal in this case: a distinct dip in brightness matching to the shadow of the black hole in the background. Depending on how enormous the black holes are and how closely their orbits are linked, this slight dimming can last anywhere from a few hours to a few days.

The study has been published in the journal Physical Review D.

Jordy Davelaar, a post-doctorate fellow at Columbia and the Flatiron Institute's Center for Computational Astrophysics, and the study's first author said that the high-resolution image of the M87 black holes required years and a significant effort from dozens of scientists. That method only works for the largest and closest black holes, such as the two in the centre of M87 and, possibly, the Milky Way.

Davelaar added that their method involves measuring the brightness of black holes over time rather than spatially resolving each object.

Talking about the shadow of a black hole, co-author of the study Zoltan Haiman said that the size of the black hole, the form of space-time around it, and how matter falls into the black hole at its horizon are all revealed by that dark region. Haiman is a physics professor at Columbia.

After finding a suspected pair of supermassive black holes at the heart of a far-off galaxy in the early universe, the researchers got interested in flaring supermassive black holes. NASA's Kepler space telescope was looking for minor brightness dips that indicated a planet passing in front of its home star. Instead, Kepler discovered flares from a pair of merging black holes, according to Haiman and his colleagues.

They christened the faraway galaxy “Spikey” for the brightness spikes caused by its probable black holes amplifying each other via the lensing effect on each entire rotation. Haiman and Davelaar then built a model to learn more about the flare.

The researchers are now seeking for more telescope data to confirm the dip in the Kepler data and prove that Spikey is indeed home to a pair of merging black holes. If everything checks up, the approach might be used to confirm a number of other suspected merging supermassive black hole pairs among the 150 or so that have been discovered so far.

Electric Vehicle Battery Explodes While Charging in Telangana, No One Injured
WhatsApp Message Timer Feature for Existing Chats in Testing on Android: Report