You must be from one of the six eligible categories to get your Twitter profile verified. 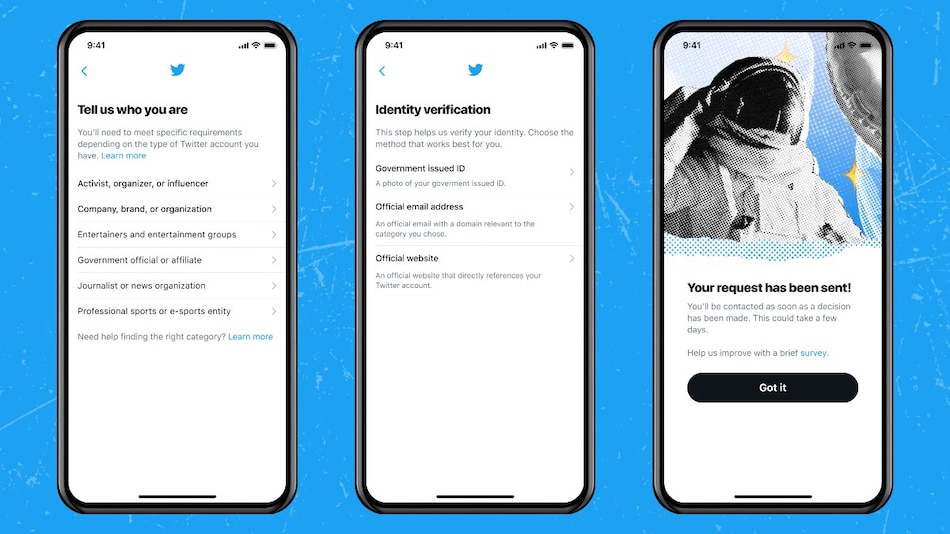 To qualify for verification on Twitter, one must fit the criteria of one of the six categories, namely government; companies, brands, and organisations; news organisations and journalists; entertainment; sports and gaming; activists, organisers, and other influential individuals. Twitter also requires you to have a complete account, meaning it should have a profile name, profile image, and either a confirmed email address or phone number.

Twitter also requires your account to be active within the last six months and have a record of adherence to its rules. Details about ineligible accounts are provided in the platform's verification policy.

As Twitter has started rolling out the process, all users on the platform will start to see the new verification application in the Account Settings tab over the next few weeks. It will be available to everyone in a gradual manner, the San Francisco, California-based company said. This means that the option to get your Twitter profile verified may not be visible immediately.

Once you have the verification application option available, you need to provide whether you belong to one of the six eligible categories. You'll then be asked to furnish your identity details by choosing from uploading your government issued ID, entering your official email address, or giving an official website link that has direct references to your Twitter account.

You will receive an emailed response from Twitter once your application is submitted. It would take from a few days to a few weeks, depending on how many open applications are in the queue. You should, however, expect the latter as there is quite a lot of anticipation among people to get the blue badge.

Twitter will start showing the blue badge on your profile if the application is approved. Otherwise, you can reapply 30 days after receiving Twitter's decision on your application.

Although the list of categories eligible for the verification process is quite limited, Twitter said that it was planning to introduce more categories later this year and they may include scientists, academics, and religious leaders, among others.

The new verification process, which is now rolling out over four years after the suspension of the earlier model, is a result of public feedback that Twitter took last year. That feedback shaped the revamped verification policy that was introduced in December.

Twitter also in January started enforcing that policy to automatically remove the verification badge from accounts that no longer meet the updated criteria for verification, such as those that are inactive or incomplete, the company said.