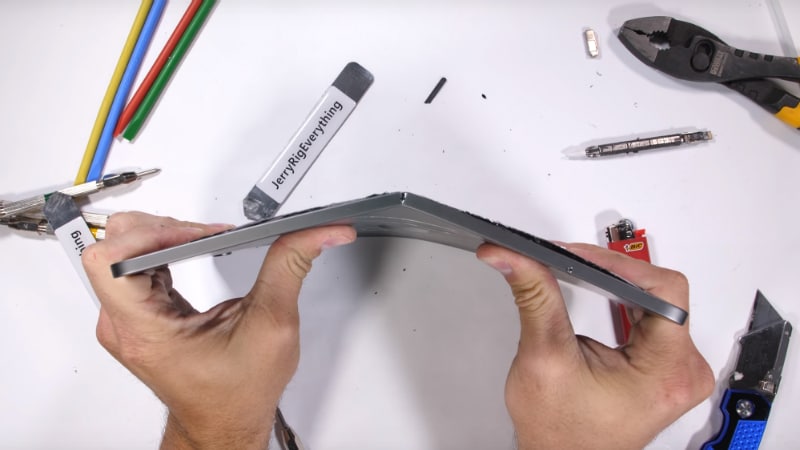 Just days after the formal debut of the iPad Pro (2018) in India, the latest iPad model has now been put through a durability test under which its display panel and build quality have been tested. The new Apple tablet is seen to fail a bend test, which ultimately saw it getting cracked from the centre. Alongside the iPad Pro (2018), the new Apple Pencil also faced a durability test that broke it into two without any significant effort.

YouTube channel JerryRigEverything has published a video showing a series of durability tests of the iPad Pro (2018). Narrator Zack Nelson in the video shows that the latest iPad Pro model can easily be bent by putting some pressure at the centre. He alleges that there isn't any "structural integrity" to resist bends. Of course, you aren't going to keep the 11-inch iPad Pro that Nelson tested in your back pocket, though he points out that you might see the impact when you inadvertently sit on it while it's laying around unnoticed on a couch or bed.

"The two weakest points are the right dead centre on either side of the iPad Pro," he says in the video.

It indeed makes sense to test the rigidity of smartphones after the iPhone 6 bendgate fiasco. However, it seems a bit redundant to put a tablet as large as an iPad Pro in a bend test - tablets usually don't offer as robust a build as a smartphone due to their larger surface area and thin bodies. Nonetheless, the bend test performed by JerryRigEverything does indicate the new iPad Pro is quite fragile. The Cupertino giant didn't explicitly reveal whether it is using the same 7000 Series aluminium that it offered on the iPhone XR earlier this year or an all-new material that manages to make the tablet thinner against the competition but with a flimsy structure.

Having said that, apart from the bizarre bend test, Nelson attempted to test the screen of the 11-inch iPad Pro (2018) and found that the glass panel starts showing scratches at level six of Moh's hardness scale with deeper grooves at level seven. This is similar to the scratch resistance of the iPhone XR display. He also managed to make some scratches on the frame of the iPad using a blade. The back panel is also observed to be prone to scratches. Furthermore, the rear camera that has a sapphire lens protection starts getting scratches at level six. This isn't in line with a usual sapphire lens that should scratch at level eight.

Coming to the new Apple Pencil, Nelson managed to snap it with a not very significant force. He mentions that it is just "tad stronger" than your average wooden pencil. Also, the weakest point is at its centre.

"Apple focused on making the thinnest iPad they could, without putting much thought into the structure or weak points in the frame," Nelson says while concluding the video. "So make sure if it's even in a backpack, you don't lean up against a chair or a wall and make sure grandma doesn't accidentally sit on [as] it won't survive."