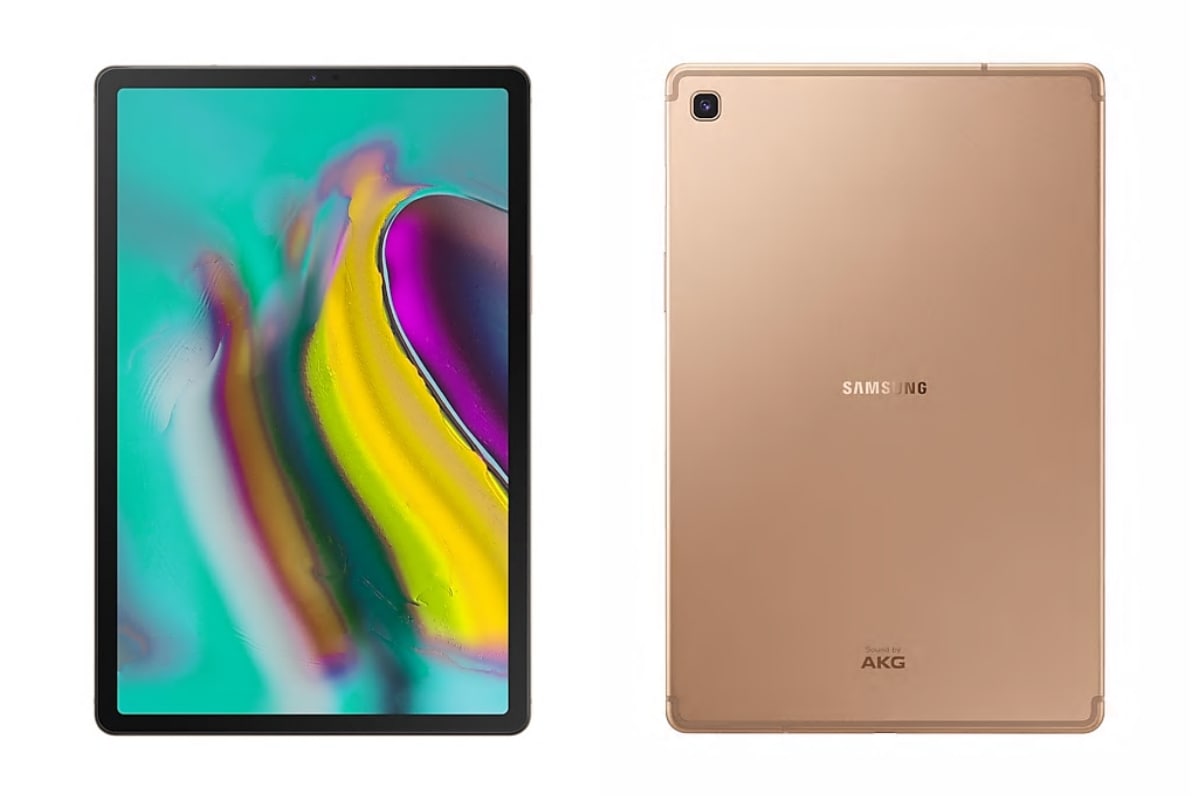 Samsung Galaxy Tab S5e and Galaxy Tab A 10.1 have been launched in India today. Both new Galaxy Tab models run Android 9 Pie with One UI on top. Key highlights of the Galaxy Tab S5e include a 5.5mm metallic body, Super AMOLED display, quad speaker system tuned by AKG, DeX support, and an octa-core Qualcomm Snapdragon 670 SoC. The tablet also has slim bezels and monochromatic finishes that reminds us of the iPad Pro. Further, there is an optional Book Cover Keyboard that connects with the Galaxy Tab S5e through its built-in pogo pin connector. The Galaxy Tab A 10.1, on the other hand, has an LCD panel, stereo speakers with Dolby Atmos surround sound technology, and an octa-core Exynos 7904 SoC.

The Samsung Galaxy Tab S5e price in India starts at Rs. 35,999 for the Wi-Fi only model, while it goes up to Rs. 39,999 for the Wi-Fi + LTE variant. The tablet comes in Black, Gold, and Silver colour options and is already available for purchase in the country through Samsung Opera House, multi-brand stores, and Samsung Online Store. The Wi-Fi only variant of the Galaxy Tab S5e is also available through Amazon.in, whereas its Wi-Fi + LTE option has been sold through Flipkart.

As a launch offer, initial customers purchasing the Galaxy Tab S5e are eligible to redeem the Book Cover Keyboard worth Rs. 7,999 at Rs. 3,500.

The Samsung Galaxy A 10.1 price in India, on the other side, starts at Rs. 14,999 for the Wi-Fi only model and its Wi-Fi + LTE variant comes at Rs. 19,999. While the Wi-Fi only Galaxy Tab A 10.1 will be available only through Amazon.in and Samsung Online Store in the country starting June 26, its Wi-Fi + LTE variant will be available through Samsung Opera House and various multi-brand stores, in addition to Amazon.in and Samsung Online Shop, from July 1.

The Samsung Galaxy Tab S5e runs Android 9 Pie and features a 10.5-inch WQXGA (2560x1600 pixels) Super AMOLED display with a 16:10 aspect ratio and 81.8 percent screen-to-body ratio. Under the hood, the tablet has the Snapdragon 670 SoC, coupled with 4GB RAM. There is also 64GB of onboard storage that is expandable via microSD card.

Samsung has provided the AKG-tuned quad speaker system on the Galaxy Tab S5e that is powered by Dolby Atmos 3D surround sound technology. The tablet also comes preloaded with the company's DeX mode that enhances its productivity. The dedicated mode brings a new UI that is touted to support 20 windows operations on a single screen. There are also features such as drag and drop support to provide a notebook-like experience. Moreover, users can enable the DeX mode simply by connecting the Galaxy Tab S5e with the Book Cover Keyboard.

In addition to the DeX mode, the Galaxy Tab S5e has a Call-Message Continuity feature that allows users to answer a call or reply to a message that they receive on their Galaxy phone directly from the tablet. There is also a Family Share feature to enable sharing between multiple Samsung accounts. Further, the tablet supports Face Recognition and Fingerprint scanning.

The Galaxy Tab S5e sports a 13-megapixel camera sensor at the back and an 8-megapixel camera sensor at the front. In terms of connectivity, the tablet has Wi-Fi 802.11ac, Bluetooth v5.0, GPS/ A-GPS, USB Type-C (Gen 3.1) port. Onboard sensors include an accelerometer, fingerprint sensor, gyroscope, magnetometer, hall sensor, and an RGB light sensor.

The Galaxy Tab S5e packs a 7,040mAh battery that is rated to deliver 14.5 hours of video playback time on a single charge. The battery also supports fast charging. Besides, the Wi-Fi only variant weighs 400 grams, and the tablet measures 245x160x5.5mm.

Similar to the Galaxy Tab S5e, the Samsung Galaxy Tab A 10.1 also runs Android Pie with One UI on top. But there are many noticeable tweaks between the two models to justify the price difference.

Unlike the quad speaker system on the Galaxy Tab S5e, the Samsung Galaxy Tab A 10.1 has dual stereo speakers but with Dolby Atmos technology. The tablet also comes preloaded with a Kids Home feature that can be launched through the Quick Panel to let parents set up playtime and allow certain apps and media content for their children.