Reliance Industries Limited Chairman, Mukesh Ambani says Jio is confident on being the first to launch a full-fledged 5G service in India. 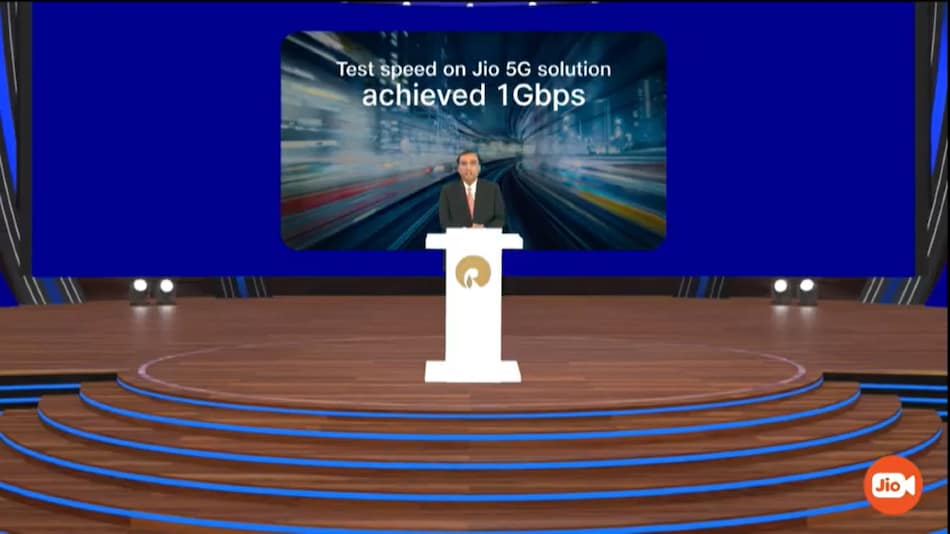 Reliance Jio Chairman Mukesh Ambani outlined the company's 5G rollout plans and promised that Jio would be the first company to bring 5G service to India, saying that the company is working on a 2G mukt, and 5G yukt, India, or 2G-free, and 5G-enabled. At the company's 44th Annual General Meeting (AGM), Ambani also talked about the growth of its relatively new JioFiber broadband service. During the virtual event, Ambani said that Jio has started testing its 5G solution in India, and it has successfully demonstrated speeds in excess of 1Gbps. Reliance also announced that JioFiber has now been installed in 3 million active homes since inception, of which 2 million were added in the last one year. Additionally, he said that Jio will use Google Cloud to power Jio's 5G solutions in the future, and for also powering Reliance Retail, JioMart, JioSaavn, and JioHealth.

‘Jio will be first to launch 5G in India'

Beginning with the home-grown standalone 5G connectivity, Ambani said that Jio's 5G solution is ‘comprehensive, complete, and globally competitive'. “Recently we received the necessary regulatory approvals as well as trial spectrum for initiating 5G field trials. The entire 5G standalone network has been installed in our data centers across India and on trial sites in Navi Mumbai. We are confident on being the first to launch a full-fledged 5G service, and because of our converged future-proof architecture, Jio's network is uniquely positioned to quickly upgrade from 4G to 5G,” Ambani explained.

Reliance Jio is said to be the world's second-largest data carrier that manages to handle 630 crore GB of data traffic every month, registering a nearly 45 percent growth in the last year. The company spent Rs. 57,123 crore to buy additional spectrum and invested Rs. 15,183 crore to expanding network infrastructure in the country. This is said to have added the capacity to add 200 million more customers to the network. Ambani also expressed the need to shift the 300 million existing 2G users to faster networks.

At the AGM, Ambani detailed that Jio is working with global partners to develop an end-to-end 5G ecosystem, including new devices. The Jio 5G technology will also enable the creation of compelling apps in healthcare, education, entertainment, and retail. It is developing a new connected ambulance, in partnership with Hiranandani Reliance Foundation Hospital. The connected ambulance will incorporate features like remote doctor access, real-time hi-fidelity telemedicine, with the aim to make the ambulance a virtual hospital emergency room while on the move.

Jio is also working with Reliance Foundation Schools to develop immersive and interactive AR and VR content for students and classrooms to make the learning process more eventful. Jio also aims to export its 5G solutions to other telecom providers across the globe.

Coming to JioFiber broadband services, Reliance also announced that JioFiber was installed in 2 million new premises in last year despite of many months of restrictions during the lockdown. Additionally, JioFiber is said to have now been installed in 3 million active homes since inception making it the largest and the fastest-growing broadband operator in India. Data consumption on JioFiber has grown by 3.5 times more than compared to a year ago. Ambani announced that JioFiber's network is present outside 12 million homes and business premises with a deep fiber footprint in top 100 cities.

In addition to launching the JioPhone Next in partnership with Google, the company also announced its adoption of the Google Cloud service for several Reliance businesses. Jio will use Google Cloud to power Jio's 5G solutions in the future, and for also powering Reliance Retail, JioMart, JioSaavn, and JioHealth. Reliance will shift its core retail businesses to Google Cloud infrastructure to enable scaling up and improve customer experience. Google Cloud will also provide a complete end-to-end cloud offering for fully automated lifecycle management of Jio's 5G network and services.

In addition, Jio and Google Cloud will collaborate to bring a portfolio of 5G edge computing solutions to help industries address real business challenges. Jio will explore building new services across gaming, healthcare, education, and video entertainment sectors. These services will use Jio's 5G network, software, and Google Cloud's innovations in AI/ML, data and analytics, and other cloud-native technologies—delivered by Jio and powered by Google Cloud.