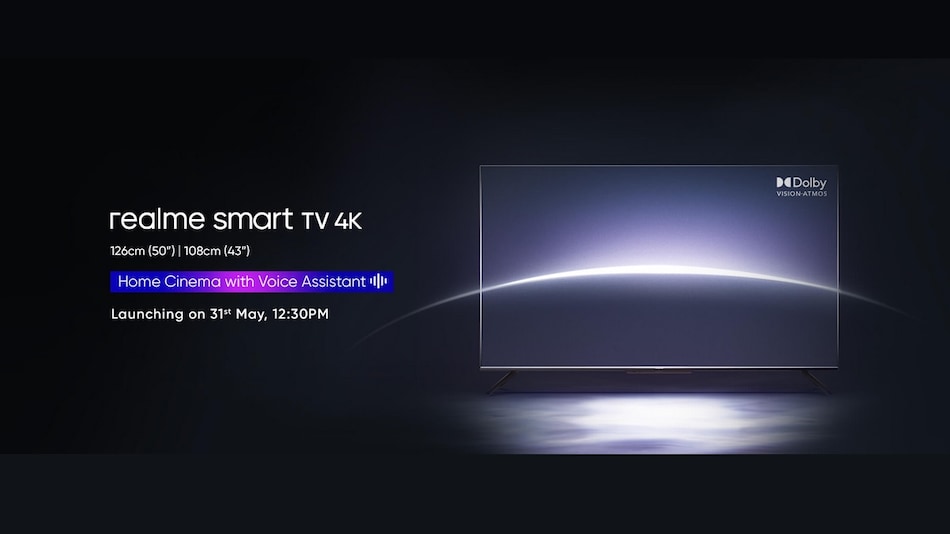 Realme Smart TV 4K specifications and pricing in India have allegedly been leaked ahead of its May 31 launch. The company will launch two models — 43-inch and 50-inch — both of which will feature voice assistance. As per the leaked specifications, Realme Smart TV 4K models will be powered by a quad-core MediaTek SoC and run on Android 10. They are expected to feature Bluetooth v5 and dual-band Wi-Fi for connectivity. Both models are expected to offer 4K resolution with 178-degree viewing angles.

The report also suggest some possible specifications for the 43-ich and 50-inch Realme Smart TV 4K. The models are expected to be powered by a quad-core MediaTek SoC and run on Android TV 10. The exact SoC model is currently unclear. They will come with an inbuilt Chroma Boost Picture Engine for accurate colour reproduction. Both models will have 4K resolution with 178-degree viewing angles and 1.07 billion colours. They are expected to feature Dolby Vision technology as well.

The audio could be handled by 24W quad stereo speaker system with Dolby Atmos and DTS HD support. For connectivity, Realme Smart TV 4K models may come with three HDMI ports, two USB ports, AV out port, Ethernet port, and a tuner port. It will also feature dual-band Wi-Fi and Bluetooth v5. The 43-inch model is reportedly rated for 100W power consumption while the 50-inch model is rated for 200W.

As of now, Realme has not shared any details about the pricing or the specifications for the TV models, except for Dolby Vision, Dolby Atmos support, voice assistance, and the sizes. Realme Smart TV 4K will be unveiled on May 31 at 12:30pm IST through the company's social media channels.