Tata Sky Binge Review: 5 Streaming Services in One for a Single Monthly Fee 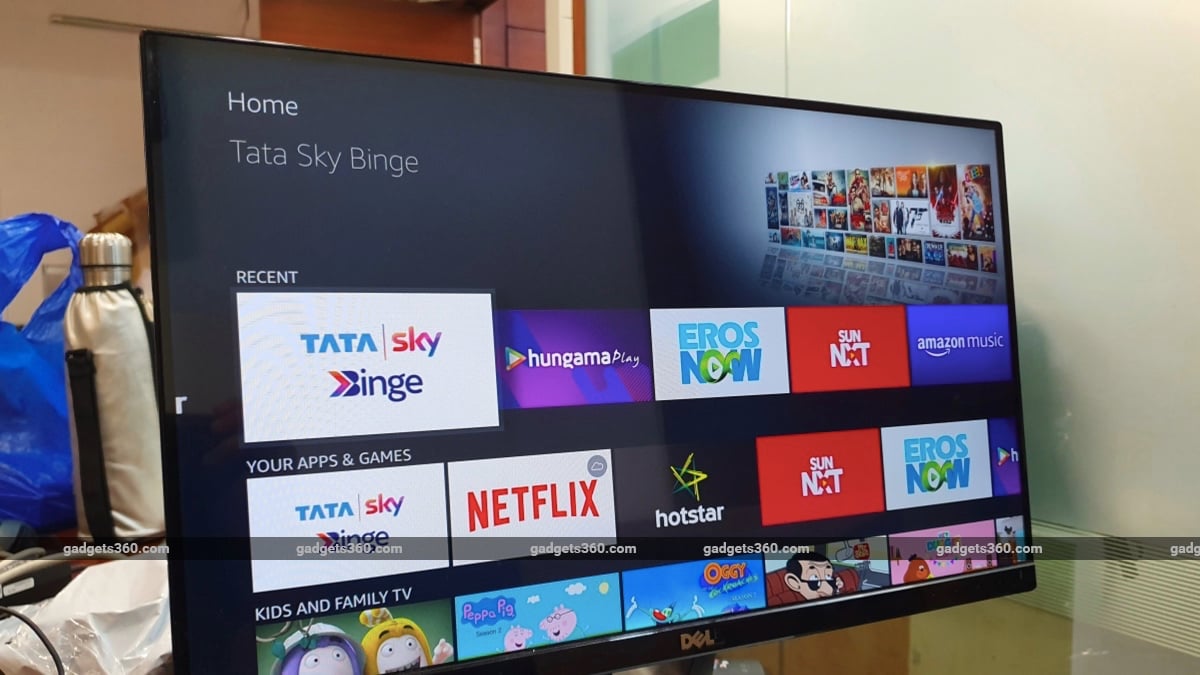 Let's get straight to the point here: there are too many streaming services. TV and movie streaming buffs like us need to be subscribed to more than one service since the best content is often spread across different platforms. This is, of course, in addition to our regular DTH or cable TV service. The bottom line here is that the subscription costs start to add up to a lot over time.

Enter Tata Sky Binge, a new streaming service from one of the biggest DTH satellite television operators in India, which has a subscription fee of Rs. 249 per month. It's worth pointing out that Binge isn't the first streaming service from Tata Sky — the company also has Video On Demand (VOD), a platform that allows users to access a huge library of content.

Tata Sky Binge is a combination of five streaming services in one, and also works with your regular Tata Sky DTH subscription to allow you to watch programmed content from the previous seven days whenever you like. How does this service work?

The key feature of this service is the huge library of content that you get from four key Over-The-Top (OTT) streaming platforms - Hotstar, Eros Now, Hungama Play, and Sun Nxt, as well as Tata Sky's own VOD service. The combined cost of monthly subscriptions for all of these services would typically be in excess of Rs. 500, so the Rs. 249 monthly fee for Tata Sky Binge (on top of your existing DTH subscription fee) does come across as good value at first glance. But is the devil in the details? We decided to find out.

Tata Sky Binge is a service, but even a service needs the right hardware to run on. In this case, that hardware is an Amazon Fire TV Stick. While Tata Sky's VOD service relies on a special set-top box that needs its own Wi-Fi dongle or wired Ethernet connection to function, Tata Sky Binge functions on hardware that is much more modern and user friendly. However, the service won't work on any Amazon Fire TV Stick.

The Fire TV Stick itself is a fully functional unit that is similar to the regular full-HD version that retails at Rs. 3,999, but there are some poorly applied stickers with the Tata Sky Binge logo on the device itself and on the remote. The device allows you to connect to the Internet wirelessly, and you can install various popular apps and services that are available for the platform, including Netflix, YouTube, and Gaana. Many of the services are premium offerings, and will need their own separate subscriptions to work.

The major addition to this customised device is the Tata Sky Binge app, which comes preinstalled. You will need to log in with your Tata Sky subscriber details. We were unable to install the app on our regular Amazon Fire TV Stick 4K, which means that the only way to access the app is through the special edition. The use of this hardware is rather smart in our opinion, since the Fire TV Stick is affordable, can connect to the Internet wirelessly, and offers all the features of the standard Fire TV Stick in addition to running the Tata Sky Binge app.

The Tata Sky Binge app is a combination of five streaming services in one — Hotstar, Eros Now, Hungama Play, Sun Nxt, and Tata Sky's own Video On Demand (VOD) service. The benefit of this is to consolidate multiple OTT platforms into a single service with a single bill amount, rather than individually subscribing to and find ways to use multiple services.

However, it's worth pointing out that not all of these services may be useful to everyone. While Hotstar does have a lot of global TV shows including the massively popular Game of Thrones, the Binge app doesn't include its live sports content. However, the Hotstar app on the Fire TV Stick's interface had an active premium subscription through the Binge service, and could be used to stream live sports, which means you don't need to buy a Hotstar Premium subscription separately.

Similarly, Eros Now is known for its Hindi movies and TV shows as well as content in other Indian languages; Hungama Play has a decent catalogue of music and movies; and Sun Nxt has a strong focus on content in South Indian languages. There may be something for everyone here, but it's hard to imagine who would want access to all of these services together (maybe an extended family?!).

Tata Sky's own VOD library is decent as well, and all the content is conveniently sorted into categories such as Movies, Entertainment, Kids, Regional, Sports, and more. You can also stream regular TV programming from the last seven days, which is directly streamed from Tata Sky's servers. You do need to be subscribed to a channel through your regular DTH connection separately if you want to stream content that has played on it. All content from the five streaming services is available to use for as long as your Binge subscription is active.

The interface of the app is well laid out, but we found it to be a bit sluggish during our time with the service. We felt some noticeable response delays and had to deal with long loading times when navigating around the app, particularly when using the Last 7 Days feature. This lag got tiresome very quickly, and we often had to press buttons multiple times before the app finally reacted to commands.

Searching through content was also a bit difficult unless we know exactly what we wanted to watch, and we found often ourselves browsing aimlessly until we found something that appealed to us. The presentation and showcasing of content wasn't quite as good as it is on Netflix and Amazon Prime Video, which tend to learn from your viewing habits and put new and highly-rated content right on top.

Tata Sky Binge is an interesting service, but in our opinion, it has limited appeal to users. The conditions for getting on board are strict: you need an active Tata Sky DTH connection, and you'll have to pay Rs. 249 fee per month for Binge over and above what you already pay for your regular Tata Sky package. Although the Fire TV Stick is provided for free, it will need to be returned if you stop paying for Tata Sky Binge.

The Amazon Fire TV Stick itself is excellent hardware to run the platform on, and does offer value to the customer in addition to running the Tata Sky Binge app. If you want to give ‘cutting the cord' a shot and go the OTT streaming way, this service might work for you, but it isn't an alternative to your DTH service, not least because you need an active Tata Sky to use Binge.

While Rs. 249 per month might seem like a good price for five streaming services, the various services are so diverse that it'll be hard to find someone who actually uses all of them. This bundle could come in handy for families who watch different types of content. Unless that's your specific use case, Tata Sky Binge will just be an added expense. Plus, Netflix and Amazon Prime Video, which have a lot of popular content, aren't included. Interestingly, new subscribers to Tata Sky Binge do get 3 months Amazon Prime membership for free.

For most people, it probably makes sense to invest in a streaming device or smart TV separately, and get onto the OTT streaming bandwagon the regular way.