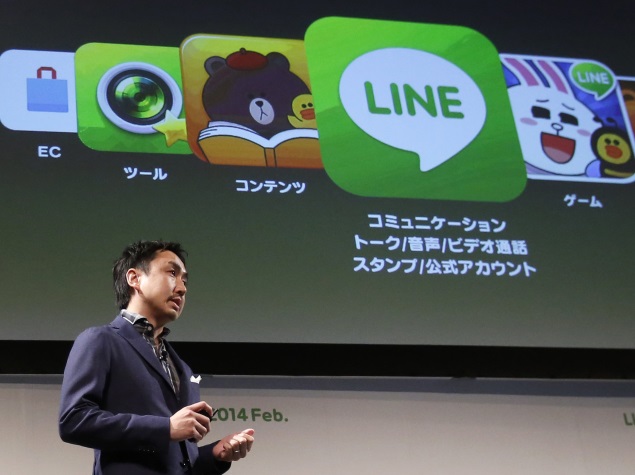 A messaging app launched in the aftermath of Japan's 2011 earthquake and tsunami, Line is moving towards a possible dual listing in Tokyo and New York as it jostles for space in an increasingly crowded and imaginative market.

Combining instant messaging with shopping, gaming and other features such as letting users send each other cute cartoon "stickers", Line is hugely popular in Japan, particularly among teenagers.

But competition is fierce when it comes to expanding into emerging markets.

Its plans for a reported $9.8 billion Tokyo listing would help on that front - coming after February's rush of deal making, including Facebook's purchase of WhatsApp for as much as $19 billion and Japanese online retailer Rakuten's $900 million spend on Viber.

Other rivals include WeChat, owned by Chinese giant Tencent Inc, and South Korea's Kakao Talk - both of which have also developed their own popular cartoon "emoticon" messages.

"Line's challenge is how to diversify its sources of profit in the future."

Sato said a roughly $10 billion value for Line was reasonable given that its finances eclipse some of Japan's most successful smartphone game developers.

Line, which says it has more than 400 million registered users in Japan and other parts of Asia, lets users make free calls, send instant messages and post photos or short videos. It combines attributes from Facebook, Skype and WhatsApp.

About 88 percent of Japanese smartphone owners use messaging apps including Line, according to a survey by the Communications and Information network Association of Japan.

"I get in touch with friends mostly through Line - for example, when I want to go somewhere together with them," Kanako Baba, a 25-year-old Japanese translator, told AFP.

"I don't use emails very often," she said. "Line is toll-free and handy."

But boosting its user base alone is not enough to generate profit, say analysts. More than 60 percent of its revenues come from games, but what differentiates Line from some of its rivals like WhatsApp is one of its main selling points - its stickers.

Users can post these to friends after purchasing them from Line's online store for a fee of around $1-2. Many feature a rabbit called "Cony" and her bear boyfriend "Brown", allowing users to express themselves with pictures as much as words.

A new service launched this year allows people to create their own stickers and sell them to each other on the platform. Line collects 50 percent of sales revenue as commission.

"Success in gaming can be elusive. One game title can be a blockbuster hit, but this may mask several other unprofitable titles," said Sato.

Targeting non-IT types
Line's plans for an IPO in New York is seen as an attempt to tap the North American market, said Toshiaki Kanda, IT journalist and social media consultant.

(Also See: Line Expected to Choose New York for IPO Instead of Tokyo)

"What made Line grow at this rapid pace is that from the beginning the company has targeted the mass market comprising people unfamiliar with IT technologies, rather than the IT savvy," he said.

"There is nothing new in free messaging functions `- that already existed in Skype, for example. But it launched a huge TV commercial campaign and the 'stickers' service" in Japan.

"Line will probably take the same strategy in the US market, targeting teenagers there," he said, adding the planned share offering "would provide it with much needed capital with which to launch advertising".

Neha Dharia, senior analyst at technology research firm Ovum, said in a report that the listing "makes perfect sense as it will not only raise its profile further in the market, but it will also provide them with adequate funds to strengthen their product offering".

Analysts said messaging app users are fickle, jumping from one app to another.

"At the moment, Line has good revenue from game and stickers. But the other messaging apps can easily and quickly imitate and take the place of Line's current position," Sato said.

Line gave no further details on its initial public offering (IPO), including the possible size of the deal.

Dow Jones Newswires has cited a source as saying Line could list in Tokyo as soon as the autumn.