DuckDuckGo desktop browser is claimed to use about 60 percent less data than Google Chrome. 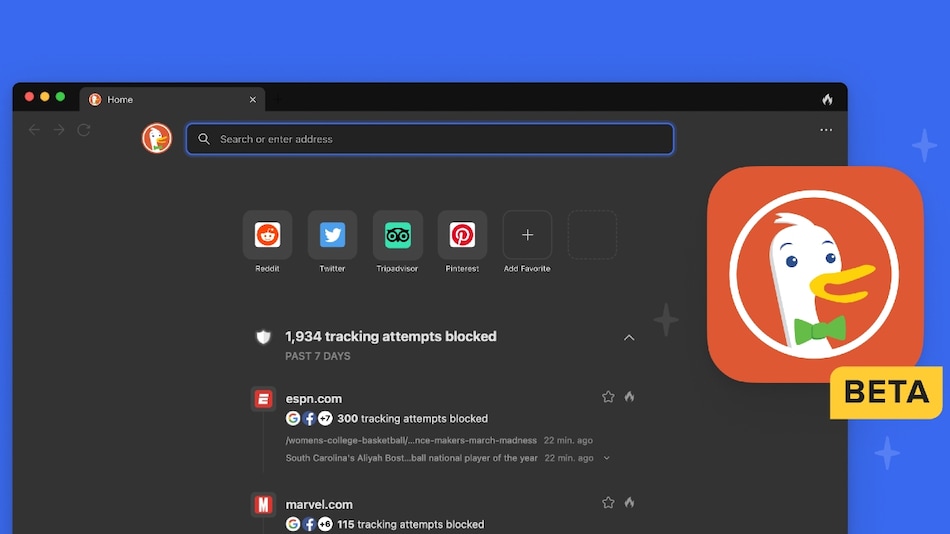 DuckDuckGo — the privacy-focussed Internet search engine — has introduced a desktop browser to take on the likes of Google Chrome and Microsoft Edge. The new browser, which is currently in beta testing for macOS, is claimed to offer inbuilt privacy features, including cookie pop-up protection and a feature called Smarter Encryption that helps navigate to the encrypted (HTTPS) of websites. It also has DuckDuckGo as the default search engine. In 2018, DuckDuckGo stepped into the world of Web browsers by launching its first browser for mobile devices. It is claimed to have been downloaded over 150 million times since launch. The same experience is coming to desktops through the new move.

Unlike an existing Web browser, DuckDuckGo for Mac comes with the cookie pop-up protection that helps reject annoying cookie tracking pop-ups from 50 percent of the websites at this moment. The protection will expand to other sites throughout beta, the company said.

By blocking trackers, DuckDuckGo claims that it uses about 60 percent less data than Chrome. The browser is also touted to offer a faster graphics performance over the Google offering.

DuckDuckGo is using the same rendering engine that is powering Safari on macOS to make the browser most compatible with the Mac system. This essentially helps deliver a faster Web browsing experience over Chrome and other browsers (including Edge) that are using Chromium as their rendering engine.

The DuckDuckGo browser also includes a Fire Button to offer one-click data clearing to users. Additionally, there are features including email protection and inbuilt password manager to ease your Web browsing. The password manager supports importing of passwords from other browsers and browser extensions including 1Password and LastPass. DuckDuckGo also has plans to bring a similar password management on its mobile apps to let users privately sync passwords and bookmarks between devices.

The new browser also has an ad blocker that helps restrict "invasive trackers" to block ads on its own.

Similar to other browsers, DuckDuckGo has included regular browsing features such as tab management and bookmarks.

DuckDuckGo for Mac is currently an invite-only beta. You can join the private waitlist by going to Settings > DuckDuckGo for Desktop (under the More from DuckDuckGo section) from the DuckDuckGo mobile app.

Once you get the invite, you will be notified from the mobile app. It will include the link that you need to open through your Mac computer to download the browser.

Being a beta app, the DuckDuckGo desktop browser has some limitations at this moment. It, for instance, doesn't support extensions. You may also notice some bugs at this stage, though the browser was already piloted among early testers before releasing the beta version.

DuckDuckGo has plans to bring its Windows version later this year, though an exact timeline on that front is yet to be announced. The company also has an interest in Linux, but the initial plan is to offer the browser on Mac and Windows devices.

Moreover, DuckDuckGo is planning to open source the Mac app once it completes the beta period to make the privacy-protected browser code available to third-party developers — similar to how it has offered open-source versions of its iOS and Android apps.

Companies including Google have been scrutinised for not offering a privacy-first browsing experience to their users. In such a scenario, DuckDuckGo's expansion in the browser market is likely to help the company gain some user attention and grow its business.