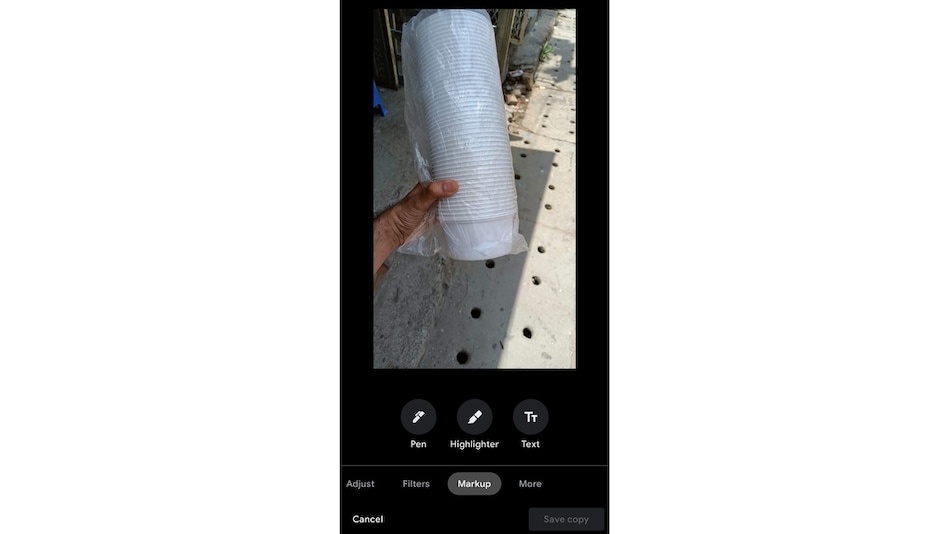 Google Photos' Mark up tool has a pen, a highlighter, and a text box option for doodling

Google Photos is making it easier for Android users to doodle on their photos. Users can experiment with their photos using the Markup tool that now has a dedicated tab in the editing menu. The Markup tool allows users to draw or add text to an image while editing, and its new placement should encourage users to use it more often. Recently, Google changed its policy to end support for unlimited cloud storage for images and videos via its Google Photos platform. Google users now only have 15GB worth of storage for free that is shared across Photos, Drive, and Gmail.

The change in the Google Photos editing menu was first spotted by 9to5Google. The Markup tool was earlier hidden within the More tab, but it has now been moved out to be a part of the main editing menu. Although, users will still have to swipe till the end of the menu to reach the Markup tool, which is now located between Filters and More on Android smartphones.

The tweak in Google Photos is said to be widely rolling out for Android devices, and Gadgets 360 was able to independently verify the update.

The update for Google Photos does not change the functionality of the Markup tool. Users can choose a pen or a highlighter to draw in several colours or choose the text box to add text in different size, fonts, and colours to an image. The editing feature on Google's default photos app also allows users to make changes to images by cropping them, adding filters, or adjusting their contrast, sharpness, brightness, highlights, saturation, among other things.

Google on June 1, 2021 ended support for unlimited cloud storage for its users. The search giant will now charge its users if they want to use cloud storage over the 15GB cap. Additionally, the storage cap is now divided amongst Google Photos, Drive, and Gmail. Google has introduced a Storage Management tool to help users clear up unwanted photos and videos to make better use the their 15GB free cloud storage.