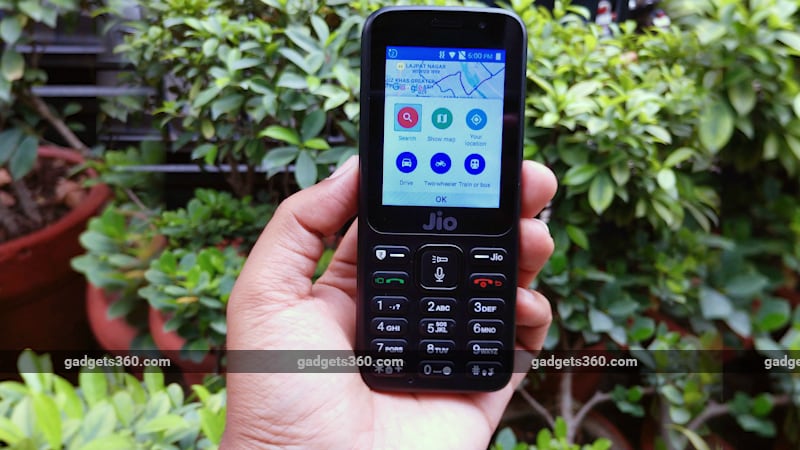 Jio Phone 2, successor to last year's Jio Phone, which runs KaiOS, was announced earlier this month at parent company Reliance Industries Limited's AGM 2018. Back in June, Google had invested about $22 million (roughly Rs. 151 crores) in KaiOS in an attempt to bring its suite of apps to feature phones. While Google Assistant, as well as WhatsApp and YouTube were previously announced for the operating software, it's been spotted that Google Maps is now available on KaiOS, on the Jio Phone. Adding to that, Google Maps should also be available on the new model once it hits shelves next month.

Made for a small 2.4-inch QVGA panel, the Google Maps on Jio Phone has a minimal layout. The Google-owned navigation mobile app on KaiOS has a smaller file size compared to its traditional Android or iOS counterparts and, thus, comes with a set of toned down options such as Search, Show map, Your location, Drive, Two-wheeler, Train or bus, Walk, Map layers, and About. Navigating on the app is fairly easy as you just need to select from the list of drop-down suggestions when you enter the location in the search bar. Users can also access the world map however doing so on a screen with that small a diagonal dimension is not recommended. There are even map layers including Traffic that help you get an idea of current traffic situations in different areas.

Back in February this year, the Facebook app was rolled out for KaiOS, while YouTube and WhatsApp were announced at the Jio Phone 2 launch event that will arrive on the Jio Phone starting July 21. While the Nokia 8110 4G is not available in India, the KaiOS-powered feature phone will also get the update, HMD Global revealed.

To recall, the Jio Phone 2 sports a 2.4-inch QVGA display, runs on KaiOS, and features 512MB of RAM and 4GB inbuilt storage. It also comes packed with a 2-megapixel rear sensor and a VGA front camera. Battery is capped at 2000mAh, and the phone gets 4G VoLTE, NFC, GPS, Bluetooth, and FM radio in terms of connectivity.