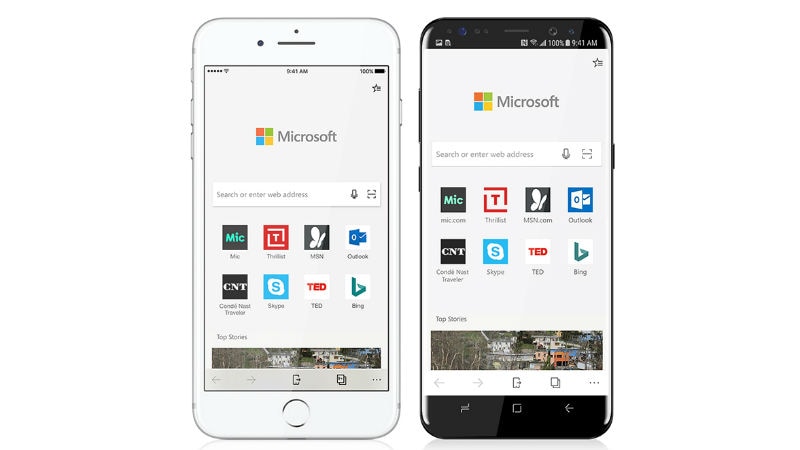 Microsoft has rolled out a new update for its Edge browser on iPhone devices, bringing in some new features. The key announcement in the latest update is the addition of one of Apple iPhone's distinguishable features - 3D Touch support. This feature was awaited for a long time, especially since 3D Touch was launched as an iPhone feature when Apple had unveiled the iPhone 6s and iPhone 6s Plus three years ago.

As we mentioned, the latest update on Microsoft Edge for iOS brings support for 3D Touch pop and peek, faster app start time, and more. While the highlight is the 3D Touch support, the introduction of other new features has brought the iOS app up to speed with its Android counterpart. The Edge browser now makes use of the 3D Touch feature on most recent iPhone models, enabling users to "peek" at pages utilising 3D touch, instead of opening them. Users can then "pop" into those pages to bring it full screen to look at what's in them.

Additionally, Edge browser users on iOS devices get the option to set a region for pages that come in the news feed on the "New Tab" page. You can go to the Settings menu and then New Tab page to customise the content. The changelog from the latest update includes features such as the Find in page option in the "..." menu, ability to open new tab in the background by long pressing on a link, as well as the ability to share links to Edge browser from other apps using share sheet. Users can also set the Outlook app to open links in Edge.

While the latest version of Microsoft Edge for iOS is available for download from the App Store, Microsoft developers have promised that iPad and Android tablet support for the Edge browser will arrive soon as well.