Microsoft at its 'Next Chapter' event last month had revealed the touch-optimised version of Office apps for Windows 10 - Word, Excel, PowerPoint, OneNote and Outlook - or rather, the Universal Office apps. Now, the company as promised has released the trio of Word, Excel and PowerPoint Universal apps for desktops, laptops and tablets running the Windows 10 Technical Preview.

The latest Universal Office apps are optimised for touch and mobile use, and are currently available to download via the Windows Store Beta that comes with the January Technical Preview of Windows 10. The 'universal' claim is that the apps are the essentially the same across devices, requiring developers to make only minor changes to support different form factors.

The company has also promised that in upcoming weeks it will release the preview for the same apps on smartphones and tablets running Windows 10.

Announcing the news via a blog post titled "The next chapter of Office on Windows", Julia White, general manager for the Office Product Management said, "Today, we're excited to announce that Word, Excel and PowerPoint are now available for technical preview on PCs, laptops and tablets running the Windows 10 Technical Preview."

Unfortunately, the official blog post has no word on the availability of a new Outlook app for the technical preview. Venture Beats quotes a Microsoft spokesperson, "Outlook Mail and Calendar for Windows 10 will be available in the Windows 10 store at a later date, but we have nothing more to share on timing."

Last month, Microsoft also announced next version of Office for desktop that will be called Office 2016, and is scheduled for general availability "in the second half of 2015."

The latest Office apps will come preloaded on Windows 10-based smartphones and tablets while will be available to download for other devices via Windows Store. 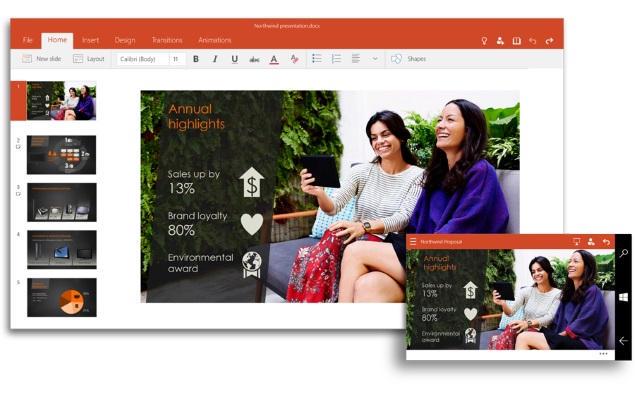 Word for Windows 10 will allow users to create and edit documents while will also allow sharing work with others to collaborate in real time. The blog adds, "The new Insights for Office feature (powered by Bing) in Read mode brings additional online resources like images, web references and definitions right to you in your reading experience." The new Excel for Windows 10 will allow users to create and update spreadsheets; analyse data, and work on charts. With PowerPoint for Windows 10, users can create and edit presentations while with the use of new Presenter View can prepare slides and present them. The new Ink Tools also allows users to annotate slides in real time. OneNote for Windows 10 is a completely new version of OneNote app.

(Also see: Windows 10 on Your Phone: What We Know So Far)

Lastly, Outlook Mail and Calender for Windows 10 will come with new features such as insert tables, pictures, add colours and with the new touch gesture that allows users to read, sort, flag and archive mails.