WhatsApp for iOS May Get Option to View Messages by Date: Report

The feature is reportedly under development and could make its debut in an upcoming release. 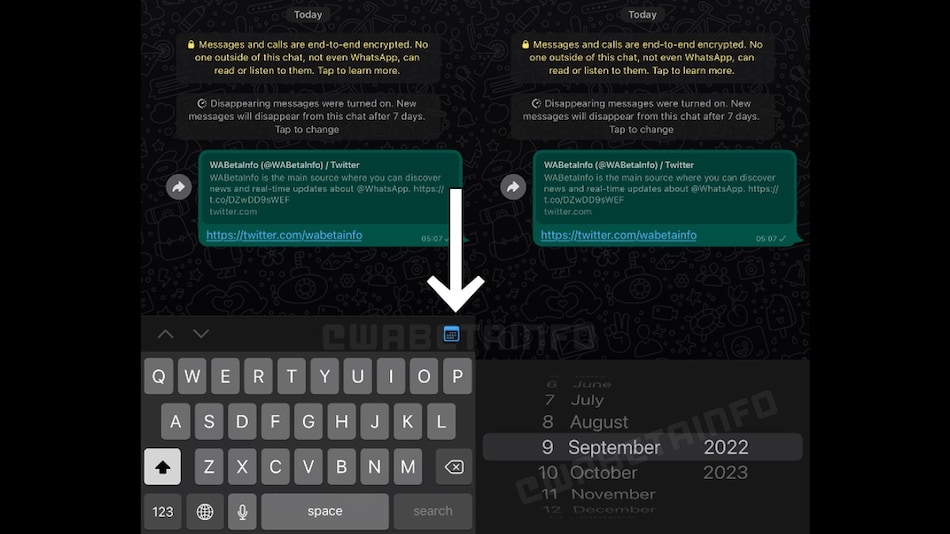 The Calendar icon may be seen just above the keyboard

WhatsApp is reportedly working on an upgraded search feature that would allow users to view messages sent on a particular date. The functionality is being tested on WhatsApp for iOS. The feature is said to be under development and its release is not known yet. It has not been released to beta testers yet, as per a report. The news comes a few days after it was reported that WhatsApp for iOS got a bug after an update. The bug automatically changed the mute duration from ‘1 week' to ‘8 hours'.

As per a post by WABetainfo, a platform that tests WhatsApp beta builds for features before they are released to users, WhatsApp for iOS may soon get a new Search by date feature that would allow users to search a message of a particular date. This means you will be able to filter out results by dates. Currently, WhatsApp shows several of results after you type a name or number in the search box.

WABetaInfo shared a couple of screenshots that suggest a Calendar icon placed just above the keyboard. In order to use the option to search for a message of a specific date, one needs to tap on the Calendar icon on the WhatsApp for iPhone. A tap will open the calendar icon, and a date picker will appear to select any month, date, and year. As mentioned, the feature is still under development in this build and it should roll out to beta testers in the future.

The development comes two days after WhatsApp for iOS users faced an issue after updating their app to version 2.22.18.76. It was reported that a WhatsApp bug automatically changed the mute duration from ‘1 week' to ‘8 hours'. However, no issue was faced when users chose the two other durations for muting chats: ‘8 hours' and ‘Always'.