The new message rating feature has been spotted on WhatsApp beta for Android 2.21.22.7. 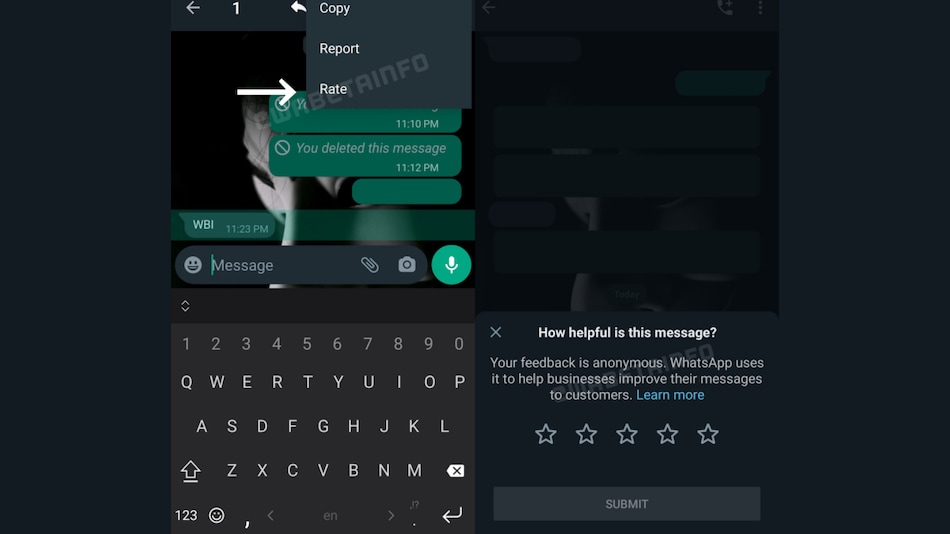 WhatsApp is reportedly working on a message rating feature for business accounts. This feature will allow users to rate messages from businesses to give them feedback. This feature is reportedly rolling out for beta users on Android, and a few iOS users have mentioned seeing it as well. This message rating feature will allow users to rate a message in stars, with five stars being the maximum and one star being the lowest. There is no option to give direct feedback to WhatsApp Business accounts yet.

Message rating, the tracker notes, only works for WhatsApp Business accounts. In addition, this feature is only available when you receive a message from business accounts. When you rate a message, WABetaInfo reports that WhatsApp cannot see its content and WhatsApp cannot see who rated that message because the feedback is anonymous. The feature reportedly does not break end-to-end encryption of message, and therefore the rated messages remain invisible to WhatsApp's eyes.

However, WhatsApp and business accounts could be able to see general feedback about sent messages from the business, but they won't be able to see who rated them. In its rating alert, WhatsApp notes that these ratings look to help businesses improve their messages to customers.

To rate a received message in a WhatsApp Business chat - tap and hold a message to open a dialog box. Earlier, the ‘report' option used to show up, alongside ‘copy', to mark few inappropriate messages as spam. Now, a new ‘rate' option has also been added for beta users.