WhatsApp will be testing the Communities feature over the next few months in a few countries before its global rollout. 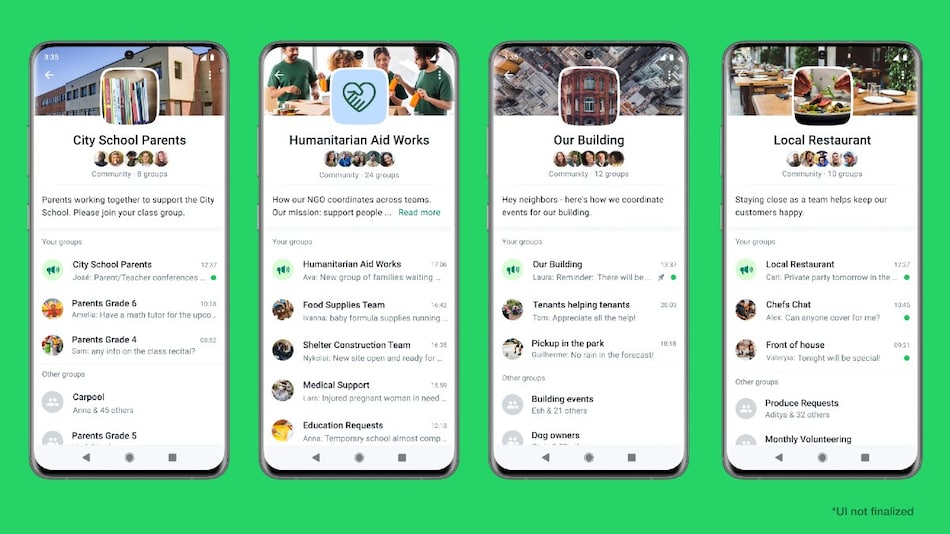 WhatsApp is trying to make groups more useful through Communities

WhatsApp on Thursday announced Communities as a new feature to help users have multiple groups together under one roof. The announcement comes months after the feature was spotted in testing on the Web. Communities on WhatsApp will enable admins with new tools, including the ability to send a single message to everyone and control over which groups can be included in a particular community. In addition to the Communities feature, WhatsApp introduced a list of updates, including increased file sharing limit, reactions, and the ability to enable group audio calls for up to 32 people simultaneously.

For the last few months, WhatsApp has apparently been testing the Communities feature. It will enable users to have separate groups under one roof to let them receive updates from these groups from a single screen — without scrolling through different chats. This will be helpful especially in case of schools, local clubs, or non-profit organisations that need to deal with multiple groups on the app.

Additionally, users of one group will not be able to see the conversations taking place in other groups, though they will have the option in place to join other groups in their Community.

"We think Communities will make it easier for a school principal to bring all the parents of the school together to share must-read updates and set up groups about specific classes, extracurricular activities, or volunteer needs," WhatsApp said in a blog post.

The prime purpose of Communities seems to enable people to easily organise smaller discussion groups on the platform that could make WhatsApp an even useful solution for group discussions. It would also help make important groups different from any of their random family groups where they mostly get just "Good morning" messages or some casual stuff.

Users in Communities will have the options to report abuse, block, accounts and leave any of them — similar to how they are open to do all such things in regular groups. WhatsApp also promised to continue to protect messages in Communities with its end-to-end encryption.

The feature will protect user privacy by hiding phone numbers from the Community at large. There will also be "sensible limits on size, discoverability, and forwarding", WhatsApp noted in a detailed document about the Communities feature.

"We will rely on all available unencrypted information including the Community name, description, and user reports to take action against abuse in Communities," the company said.

There is no concrete timeline on when Communities will be available to users around the globe. However, WhatsApp told Gadgets 360 that it would be testing the feature over the next few months in a few countries and once those tests have been completed, it would begin to roll it out globally.

In addition to Communities, groups on WhatsApp are getting emoji reactions to help people share their opinion about particular messages without flooding chats with new text inputs. This works similar to how you can add reactions to messages on Facebook's Messenger or Apple's iMessage.

WhatsApp has been testing reactions for some time. The new addition also recently appeared for some beta testers on Android.

Emoji reactions will be available in both individual chats and groups, WhatsApp confirmed to Gadgets 360.

Separately, group admins will be able to remove errant or problematic messages from everyone's chats. WhatsApp is also introducing one-tap voice calling for up to 32 people with an all-new design. Currently, it allows up to eight participants in a group voice call.

WhatsApp competitor Telegram, however, doesn't have any limit for group voice chats. It also last year enabled users to have as many as 1,000 viewers for its group video calls, though you can have up to 30 members simultaneously in a video call on the app.

Additionally, WhatsApp is increasing file sharing size to support files of up to 2GB. This is a significant expansion from the existing file size limit of 100MB. The increased file sharing size limit will be applicable to both individual chats and groups. It has been in testing for some time.

It is important to point out that the update will be limited to documents and will not be applicable to media files including photos, videos, and voice messages as they will still have the existing 16MB limit. Also, the increased limit is identical to the 2GB file sharing size limit available on Telegram.

WhatsApp said that all these new features will be rolling out in the coming weeks — before the arrival of Communities.