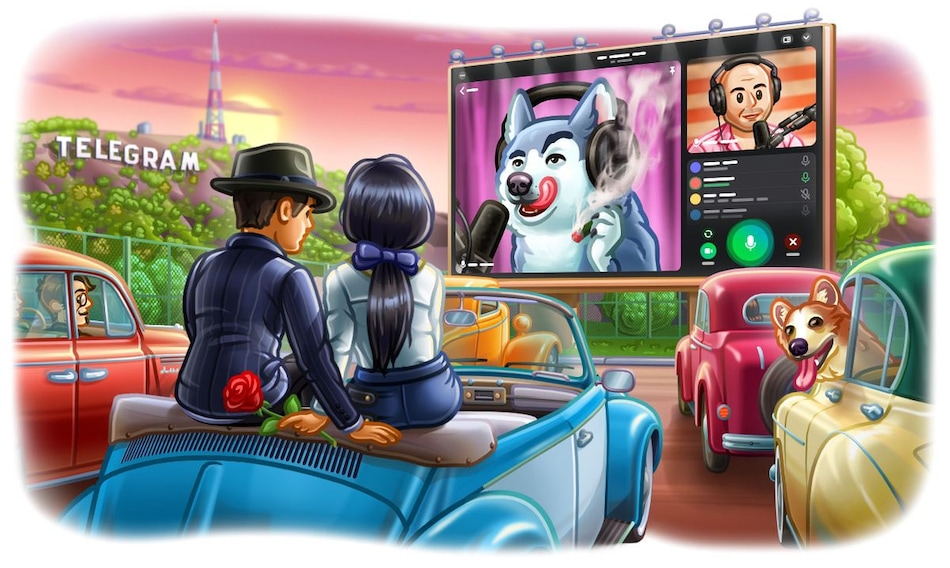 Telegram's group video calls allow up to 30 users to broadcast

Telegram's new update significantly bumps up the number of people who can participate in a group video call. The secure messaging platform now allows up to 1,000 viewers on a single video call, while keeping the number of broadcasters steady at 30. The update brings new features such as allowing users to share their screens with sound for all video calls, including one-on-one calls. Telegram has also improved the way users consume video content and send video messages. Apart from these, Telegram has added a few neat tricks to its Android and iOS apps like screen sharing to increase engagement.

One of the most significant additions to Telegram includes the ability to conduct video calls with up to 1,000 viewers. The number of people who can broadcast their video is still 30 as introduced in a previous update for the instant messaging app. The company said in its blog post that it is working on increasing the limit of the number of people who can join a group video call even further.

"To start a Group Video Call, create a Voice Chat from the info page (in the ⋮ menu on Android) of any group where you are an admin – then turn your video on," reads the blog post.

Telegram is also updating its video messages feature to give it a higher resolution. Users will also be able to tap on video messages to expand them to a larger viewer. Further, tapping on an expanded message will pause it and give users the opportunity to fast forward or rewind the selected video message. While recording, the audio on the device will keep playing and will be recorded in the video message. Furthermore, users will be able to use the pinch-to-zoom feature while recording a video message from their rear camera.

Users can now select the speed at which they want to watch a video. Telegram has added support for 0.5x, 1x, 1.5x, and 2x video playback speeds. Users on Android and iOS can tap on the three dots icon in fullscreen mode to change the video playback speed.

More new features added to the instant messaging app includes the ability to share timestamps, first introduced in 2019. Users can put timestamps on videos or YouTube links to let the recipient jump to the exact moment the users want them to view. Users can now press and hold on the timestamp to copy and share the link with others.

Another crucial feature to be added to Telegram is the ability to share screen with audio on all video calls, including one-on-one calls. Users can select the camera they want to broadcast from and also have the ability to share the contents of the screen. They can use the video previewer to check their audio and video before going live.

Messages can now be auto-deleted. Telegram has added the ability to delete messages after one month, adding to the existing options of one day and one week. The instant messaging app will now let users modify images and videos with drawings, stickers, and text with increased precision. The brush size automatically decreases when a user zooms in to a photograph to draw finer details. The desktop app also has the ability to crop, rotate, or flip images, as well as add drawings and stickers to images. It also allows images to be sent as uncompressed files.

Passcode animations along with passcode recovery and reminders have also been added. Telegram will give users a new 'password reset' option in case they forget their password and it works even if the users don't have a recovery email.

The message-sending animations on Android has also improved, which was introduced for iOS in the last update. Other new features on iOS include better camera integration in the app, choosing multiple recipients to forward messages, and animated emojis.