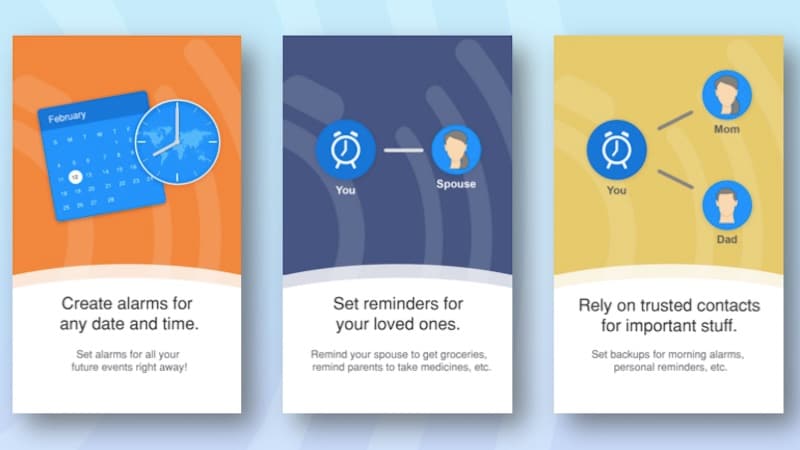 Galarm - group alarm - is a very simple sounding app that is actually surprisingly useful. As the name suggests, this is a social alarm clock - you can set the alarm for yourself, and others you're sharing the alarm with will be able to see if you turned it off, or they could set an alarm for you.

It's a nicely designed app, with a simple yet effective layout that doesn't clutter the screen, while giving you all the options you need. There are three tabs - ALARMS, GROUPS, and CONTACTS, which respectively show you the alarms you have set, the contacts using Galarm, and the groups you've made using your contacts, which can be used to coordinate plans or set group alarms easily.

To access the social features, you'll need to share your phone number and contacts with the app, which might be a cause for concern for some users, particularly as it's a free app with no in-app purchases or advertising either, only a donate option. Gadgets 360 spoke to the developers about this, who said that the goal is to first build the use case, and then look to license the app to a telco like Reliance Jio, or a phone manufacturer, who can use it as a value added offering for its users.

At first, we weren't quite sure what the point of something like this was. After all, if you need to set an alarm, you set an alarm - and if you want to make sure that someone else is on time, you can just call them. But it's not always convenient to do that, and if you know - for example - that you'll be tied up in a meeting but want to make sure that someone else leaves the house on time to catch their flight, setting up an alarm on their phone suddenly becomes useful.

You can use Galarm to set up a daily reminder for your parents to take their medicines, and you could also use this to let people know you've done something. For example, set up your alarm, and then have it automatically notify trusted contacts once you stop the alarm (as opposed to snoozing it) as you have the option of marking an alarm as done. Of course, you could do these things with a shared calendar as well, and that doesn't require multiple people to download a new app.

That's where one of Galarm's features really stood out for us. When you add contacts to a Galarm alarm, it allows you to chat with those other members in that alarm. So, let's say you want to make a plan to watch a movie with friends. Create an alarm, add them to it, and then you can chat, work out the plans, and finalise the details, all in the same alarm, which will also remind people about the plan on the day you're meeting. Sure, you could just hop into your favourite chat platform and do most of this, but what we found was that by using event specific alerts, we were able to keep track of plans and keep them separate from other conversations.

Galarm's creators also believe it could be useful in offices, to set up team schedules, or for an executive assistant to be able to add reminders to a boss's day. Personally, the Alarm Chat feature that allows for a threaded chat within an alarm is the feature we thought was the the most interesting, and that's not something that you can easily do with a shared calendar. This could also be useful if you're traveling, as the app apparently automatically adjusts for different time zones, although we didn't get a chance to test this feature in the time we made use of the app.

All in all, for something that's really simple, we found Galarm to be rather useful. Of course, a lot will depend on your specific use cases, but since the app is completely free, there's no harm in giving it a shot and seeing how well it suits your needs.

On the topic of privacy and security, there's also a point to make about registering for the app. As we mentioned at the start, you need to share your phone number with the app, and provide access to your contacts. This enables the social features of the app, and without this, you can't use the app.

If you choose not to give your phone number, you're presently shown a message assuring you that the number is not shared, and if you still don't want to share your number, it gives you a form through which you can mail the developers to share your concerns. Galarm's creator also told Gadgets 360 that he plans to allow people to use the app without sharing their number in a future version, in which case it will only be a normal alarm clock, until you are ready to share your number.

Also, Xioami users need to give an additional permission, "Autostart", so that the alarm will continue to work even after you restart your phone. This information is clearly shown when you run the app, so there should be no problems.

Galarm is available for free on Android and iOS.