Fujifilm X100V Premium Compact Camera Launched in India: All You Need to Know 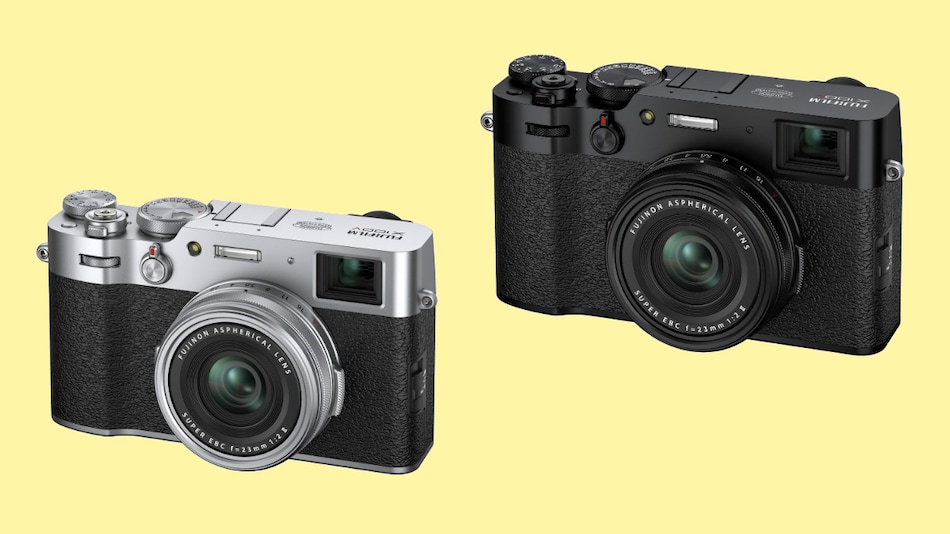 Fujifilm India has announced the launch of its latest compact camera called the Fujifilm X100V. It is the newest flagship camera in the X100 series and also the fifth iteration since the first X100, which was first introduced almost a decade ago. The new X100V comes equipped with the latest image sensor and image-processing engine to deliver premium-quality images with the company's signature colour-reproduction technology. In addition to the camera, Fujifilm has also announced the launch of two new lenses — XC 35mm F2 and GF 45-100mm F4 for its X and GFX range mirrorless camera. The company is yet to reveal the price of the camera.

The Fujifilm X100V features a 26.1-Megapixel X-Trans CMOS 4 sensor that combined with the X-Processor 4 high-speed image processing engine promises to offer premium quality photos and videos in various colour modes. The viewfinder is an Advanced Hybrid Viewfinder that has the ability to switch between an optical viewfinder and electronic viewfinder, depending on choice. With all this, the X100V offers the ability to record 4K video up to 30 frames per second or capture 120 frames per second at 1080p to create super-slow-motion effects. Additionally, image-makers can also incorporate numerous shooting functions, such as “Monochromatic Color” and “Color Chrome Effect” to extend their creative visions directly to the footage being recorded.

Moving on, the Fujifilm X100V features a new second-generation 23mm f/2.0 lens to ensure that every detail from its X-Trans CMOS 4 Sensor is resolved beautifully. According to the company, this lens is a significant step up from the ones used in past X100 Series cameras but still maintains the same overall size and compatibility with legacy WCL/TCL conversion lens, while retaining its internal 4-Stop ND filter.

Apart from the new camera, Fujifilm has also added two new lenses which are — XC 35mm F2 and GF 45-100mm F4. The XC 35mm is a prime normal-length lens that is designed for APS-C-format FUJIFILM X-mount mirrorless cameras. It provides a 53mm equivalent focal length and a bright f/2 maximum aperture. The XC 35mm F2 is priced at Rs. 16,999 and it is compatible with all Fujifilm X-series mirrorless cameras.

The GF 45-100mm F4 is a standard zoom lens that offers a 36-79mm equivalent 35mm format focal length to realize a versatile range of fields of view to suit a wide variety of shooting applications. It offers a constant f/4 maximum aperture for consistent performance throughout the zoom range. The GF 45-100mm is priced at Rs. 1,92,999 and it is compatible with all Fujifilm GFX-series mirrorless cameras.

Oppo Find X2 Launch Reportedly Rescheduled for March 6: All You Need to Know
Government Gets Nearly Rs. 15,700 Crores in AGR Dues, Will Send Notice for Remainder