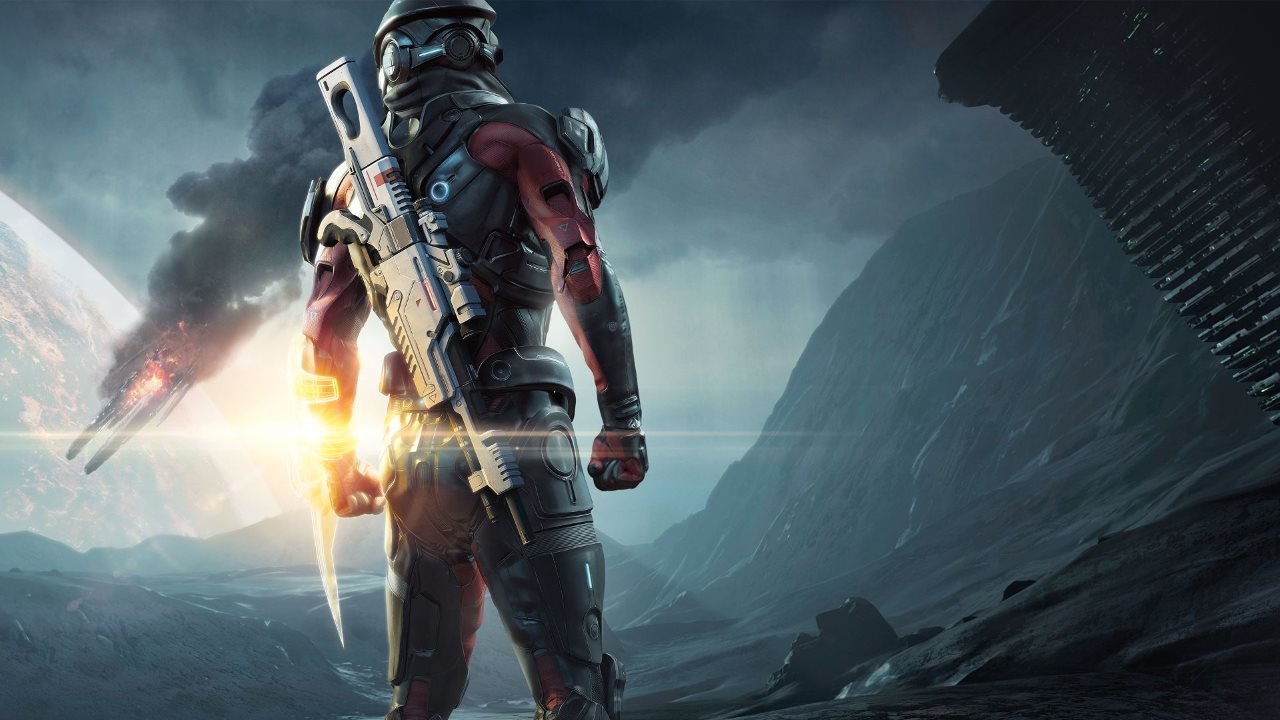 The Star Wars fandom is a tricky place to step in for new cast members, but Woody Harrelson seems to be taking things in his stride. In an interview with Collider this week, he said that the Han Solo standalone movie might very well be the best Star Wars movie yet. Not sure the fans of the original trilogy are going to take that lightly. It does have a great cast, an acclaimed cinematographer, and two successful directors, but that’s never a guarantee. We’ll find out on May 25, 2018.

Also on Wednesday, Paramount released the first five minutes of the upcoming Scarlett Johansson-starrer Ghost in the Shell, which finds her character The Major jumping from a building, breaking through glass, and firing bullets. The movie releases next Friday, March 31, around the world.

A day later, we got another trailer from Netflix – this time for its revival of the cult hit Mystery Science Theater 3000. Comedian and Nerdist podcast co-host Jonah Ray will be our new human subject, with Baron Vaughn, and Hampton Yount voicing robots Tom Servo, and Crow T. Robot respectively. The series will be available April 14 on the service.

During a talk at USC’s Marshall School of Business, Disney CEO Bob Iger hinted that we might see the Star Wars franchise easily go on for another decade or so. “We’re just starting to talk about what happens to Star Wars after [Episode] 9,” he said. “It’s way too early, and certainly nothing that I can reveal, but we’ve got a creative team actually thinking about what could be another decade and a half of Star Wars stories.”

TV:
Dave Chappelle: The Age of Spin
Returning after a gap of 12 years, Emmy-nominated comedian Dave Chappelle is back with two stand-up specials for Netflix, one shot in Austin, TX in April 2015, and the other in March 2016 at The Palladium in Los Angeles. It’s the second that’s been rated higher by most critics, where Chappelle takes on several contentious current events, and turns them into moral predicaments.

Some of it is also structured around former American footballer and convict OJ Simpson, whom he met multiple times, and fellow comedian and actor Bill Cosby, who has been accused of sexual assault by dozens of women. And that’s what makes Chappelle so engaging, as he’s unafraid to tackle everything from celebrity status, controversy, race, class, politics, and beyond.

If you want to see a stand-up comedian operate at his best, The Age of Spin brushes with that, while having some unsure moments. Chappelle is currently on tour, since he has another special scheduled for Netflix later in the year.

How to access: Netflix
Time commitment: 1 hour and 7 minutes

Movies:
Julieta
Winner of two Oscars, and four BAFTAs, Spanish writer-director Pedro Almodóvar is a powerhouse in the world of movies, best known for Women on the Verge of a Nervous Breakdown (1988), and All About My Mother (1999). He has always had a knack for complex narratives revolving around family, and identity, which tend to feature powerful female characters.

His latest, Julieta – based on three short stories from Alice Munro’s 2004 book Runaway – is more of the same, and finds Almodóvar in similar form too. Emma Suárez and Adriana Ugarte star as older and younger versions of the film’s protagonist, Julieta, who learns that her long-lost daughter is back in Madrid. From there, Julieta starts a reflection into the woman’s past, and the things she has endured.

The movie was first showcased at the Cannes Film Festival last year, and received praise for Suárez’s work in the lead, and Almodóvar’s direction, attention to colour, and the way he crafts conversation between female characters.

How to access: Amazon US, Amazon Video US, iTunes US or Microsoft Store
Time commitment: 1 hour and 36 minutes

Fire at Sea
In her summary of the film’s praise, Meryl Streep said: “It's a daring hybrid of captured footage and deliberate storytelling that allows us to consider what documentary can do. It is urgent, imaginative and necessary filmmaking.” Streep served as chair of the jury at last year’s Berlin Film Festival, where the documentary was given the Golden Bear for Best Film.

Fire at Sea, directed by Italian Gianfranco Rosi, paints a portrait of the Mediterranean island of Lampedusa, and contrasts the everyday life of the islanders with the humanitarian crisis that’s unfolding in the seas around it. Lampedusa’s significance on the refugee route comes from its geographical location – it’s usually the first land most African and Middle Eastern people see on their journey to Europe.

There’s no narration in the film, but Fire at Sea still says a lot from the director’s distilled focus. Rosi spent months on Lampedusa, talking with the locals, to understand their history, and culture. Through the viewpoint of a 12-year-old, Rosi offers a clear-eyed, poetic and non-judgemental picture, that displays the world simply as it is.

How to access: Amazon US, Amazon Video US, Google Play Movies, iTunes US, Netflix, or YouTube
Time commitment: 1 hour and 49 minutes

The third season of Grace and Frankie will be available on Netflix Friday. You can also check out our Netflix guide for March, if you’re looking for more streaming options.

Video games:
Mass Effect: Andromeda
The fourth entry in the Mass Effect franchise, Andromeda shifts the action to the eponymous galaxy, with the crew of the Ark Hyperion searching for a new home for humanity. You start as either Scott or Sara Ryder, part of a Pathfinder team who have been asleep for six centuries, while the ship travelled all the way from Milky Way.

Of course, things don’t go as planned, almost immediately. The golden world turns out not only to be a wasteland, but populated with a hostile alien species, who don’t take kindly to people landing on their planet outfitted with weapons and armour. Would you? Anyway, since you play from the PoV of humans, naturally you’ve the right to invade and kill everyone in your path.

That moral dilemma aside, ME: Andromeda retains the action role-playing nature of previous instalments, giving you access to an upgraded combat system, and an open character progression that doesn’t ask you to choose a class, but mould into one over time.

It’s gotten some flak for its animations, and the opening missions are nowhere near as engaging as before, but if you’re a Mass Effect fan, you’ll still want to try it out for yourself.

How to access: PlayStation 4, Xbox One, or Origin for Windows PCs
Time commitment: About 25 hours (main mission only)

World of Goo
Wait, isn’t this a decade-old game, you ask? What is it doing in a weekly round-up? Well, that’s because developer Tomorrow Corporation has ported it onto the Nintendo Switch (LINK TO TAG). Millions of Goo Balls are at your mercy again in the World of Goo, and as you progress through levels, you’ll come across “new species” of Goo Ball, all of whom have their own abilities.

You can also take part in ‘Mysterious Levels’, where you’ll be treated all sorts of strange levels, plus new areas, and creatures. Or you could head to ‘World of Goo Corporation’, a freeform metagame where it’s all about building the highest tower of Goo Balls. The two-player multiplayer is quite fun, too.

World of Goo is a great puzzle game (that’s why it won so many awards), and whether you’d want to buy it again on Switch – assuming you’ve played elsewhere already – will depend on how much you liked it on first go. If you’ve never played it before, then head over to the Switch eShop right now.

How to access: Nintendo Switch
Time commitment: As much as you want, really

Music:
More Life by Drake
Since its release on Saturday, the conversation surrounding Canadian rapper/ producer Drake’s latest record has focused a lot around the terminology it uses – instead of calling it an album, Drake insisted that it was meant to be viewed as a “playlist”. Huh? Aren’t playlists a collection of songs that people make around a common theme?

When the question was put to him by Billboard, his fellow producer and collaborator Paul “Nineteen85” Jefferies said: “More Life is interesting because this is him right on the peak of his biggest project yet [with Views], doing his biggest tour and still having so many good ideas that he just wants to put out without making it a big ordeal. That’s why he’s trying to call it a playlist because he has a bunch of people in a space, hanging out.”

As unintuitive as that sounds, the element of “hanging out” can be clearly felt across the music, with singers referencing the fact that they’re recording, and name-checking the label OVO Sound repeatedly. In terms of songs, Passionfruit, Madiba Riddim, and Can’t Have Everything represent the different genres he’s trying to explore, which probably explains why he shies away from calling it an album.