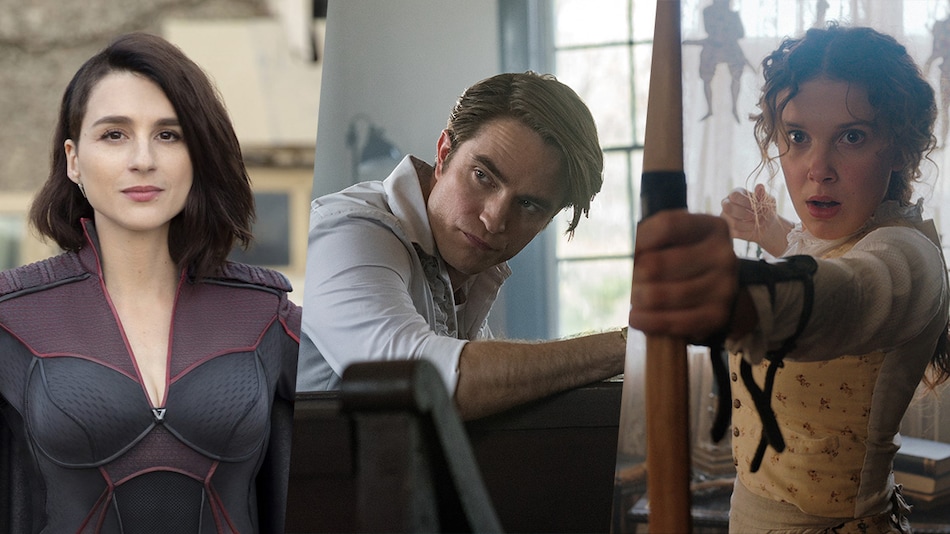 (L-R): The Boys, The Devil All the Time, and Enola Holmes

August was a big month for Netflix and Disney+ Hotstar's push into Bollywood premières, thanks to the ongoing coronavirus pandemic. Between the two, we got the Alia Bhatt and Sanjay Dutt-starrer Sadak 2, the Janhvi Kapoor-led Gunjan Saxena: The Kargil Girl, and Khuda Haafiz with Vidyut Jammwal. There was also the Shah Rukh Khan-produced Class of ‘83 in August, though that was always meant for streaming. Netflix and Disney+ Hotstar will have more such in September, alongside Amazon Prime Video which had a relatively quiet August.

In September, we've a bunch of new international series and movies coming in too, including the return of The Boys and The Simpsons, a new Charlie Kaufman film, an indie Indian sci-fi movie, and an espionage drama in Iran. Others involve Tom Holland and Robert Pattinson, Sherlock Holmes and his younger equally-capable sister, and Donald Trump — well, an actor playing him anyway. With that, here's our September 2020 guide to Netflix, Amazon Prime Video, Disney+ Hotstar, Apple TV+, and Voot Select.

When: September 1
Where: Amazon Prime Video

Entirely shot during the lockdown on screens and mobiles, Mahesh Narayanan's latest feature — he's the director, writer, cinematographer, and editor — is about Jimmy (Roshan Mathew), a Malayali software engineer in Dubai who scrambles to find a missing woman called Anu (Darshana Rajendran) he falls for over video calls, whom he suspects might have killed herself. Fahadh Faasil co-stars and produces.

When: September 4
Where: Netflix

When: September 4
Where: Amazon Prime Video

The second season of Amazon's anti-superhero show is taking a different release approach: first three episodes on release date, followed by one each week until October 9. In this season, the titular non-superpowered group — that's Billy Butcher (Karl Urban) and crew — are at the centre of a nationwide manhunt following the events of the first season. Aya Cash (You're the Worst) joins the supe cast as Stormfront.

The Boys is already renewed for a third season, with Supernatural star Jensen Ackles set to join the show.

When: September 4
Where: Netflix

Charlie Kaufman's first film in five years — after the stop-motion Anomalisa — is an adaptation of Iain Reid's 2016 eponymous novel about a woman (Jessie Buckley) who's looking to end her weeks-old relationship with her boyfriend (Jesse Plemons) but agrees nonetheless to see his parents (Toni Collette and David Thewlis) on a remote farm, where she begins to question everything.

When: September 5
Where: Amazon Prime Video

A serial killer (Nani) challenges a renowned cop (Sudheer Babu) to catch him if he can in this Telugu-language action thriller written and directed by Mohan Krishna Indraganti (Grahanam), that was supposed to be released in theatres but is now going straight to streaming. Nivetha Thomas, Aditi Rao Hydari, Vennela Kishore, and Tanikella Bharani co-star.

When: September 9
Where: Netflix

In this sci-fi film from India, Vikrant Massey plays a rakshasa, a demon who guides the dead through the underworld. He has gotten bored with his monotonous and aimless life, having been in the job for 75 years. That changes after his enthusiastic new assistant (Shweta Tripathi) lays out a bunch of new ideas. Feature debut for writer-director Arati Kadav. Anurag Kashyap produces.

When: September 15
Where: Disney+ Hotstar

Jude Law and Naomie Harris lead this miniseries that is split into two parts — “Summer” and “Winter” and will air as such, about a man (Law) drawn to a mysterious British island whose inhabitants will preserve their traditions no matter what, and a woman (Harris) whose arrival on said island puts a question mark on its future.

But that's not all. There'll also be a third part — “Autumn” — that will be held live in London between the release of the other two. Emily Watson, Katherine Waterston, and Paddy Considine also star. Dennis Kelly (Utopia) and Felix Barrett are the creators.

The Devil All the Time

When: September 16
Where: Netflix

Antonio Campos (Christine) directs off a script he co-wrote with brother Paulo Campos, based on Donald Ray Pollock's 2011 debut Southern Gothic novel of the same name.

When: September 18
Where: Netflix

In this psychological horror series that serves as a prequel to Ken Kesey's 1962 novel One Flew Over the Cuckoo's Nest and its 1975 film adaptation, Sarah Paulson plays asylum nurse Mildred Ratched, the role original essayed by Louise Fletcher in the movie. This is basically her origin story. Cynthia Nixon, Judy Davis, Sharon Stone, Corey Stoll, Finn Wittrock, and Vincent D'Onofrio co-star.

When: September 23
Where: Netflix

Sherlock Holmes' younger teenage sister (Millie Bobby Brown) is the star of this vehicle as she sets out to find her mother (Helena Bonham Carter) after she goes missing on the morning of Enola's sixteenth birthday. Henry Cavill and Sam Claflin play her elder brothers Sherlock and Mycroft. Directed by Harry Bradbeer (Fleabag) and adapted by Jack Thorne (His Dark Materials) off Nancy Springer's books.

When: September 25
Where: Apple TV+

Fauda writer Moshe Zonder is a co-creator on this multi-lingual espionage series that follows a Mossad agent and computer hacker (Niv Sultan) who goes undercover in the titular Iranian capital to put an end to the country's nuclear programme. Zonder and Omri Shenhar (Magpie) wrote the series. Daniel Syrkin (Out of Sight) directs.

When: September 25
Where: Amazon Prime Video

Gone Girl author Gillian Flynn is the showrunner for this reimagining of the 2013 British series, which once had David Fincher attached to the project. It's about a group of comic book fans who discover that everything in the titular comic — a massive government conspiracy involving biological warfare and the possible end of the world — is possibly real.

When: September 27
Where: Voot Select

Jeff Daniels and Brendan Gleeson play former FBI chief James Comey and Donald Trump in this two-part four-hour miniseries, which is set prior to and after the 2016 US presidential election and draws off Comey's 2018 best-selling memoir, “A Higher Loyalty”, after he was fired by Trump. Billy Ray (Captain Phillips) writes and directs. Two parts air on two successive days.

When: September 28
Where: Disney+ Hotstar

Having dropped in its entirety back in April, the longest-running American sitcom will now air be a weekly fixture in India with all new seasons. Production for The Simpsons' thirty-second season has taken place entirely from the makers' homes thanks the ongoing coronavirus pandemic. And in the wake of protests around police killings of black Americans, The Simpsons won't have white actors voice any non-white characters, a long overdue move for a show that continues to be tone deaf elsewhere.

When: September TBA
Where: Netflix

Bhumi Pednekar and Konkona Sensharma lead the next film from Lipstick Under My Burkha writer-director Alankrita Shrivastava, which follows the quit transgressions and the quest for freedom for two cousins (Pednekar and Sensharma) who live on the outskirts of New Delhi. Vikrant Massey, Amol Parashar, and Aamir Bashir co-star. Ekta Kapoor produces.