The Amazon founder also spoke about Gandhi, India, his last binge-watch, and climate change. SRK even made Bezos recite a line from one of his movies. 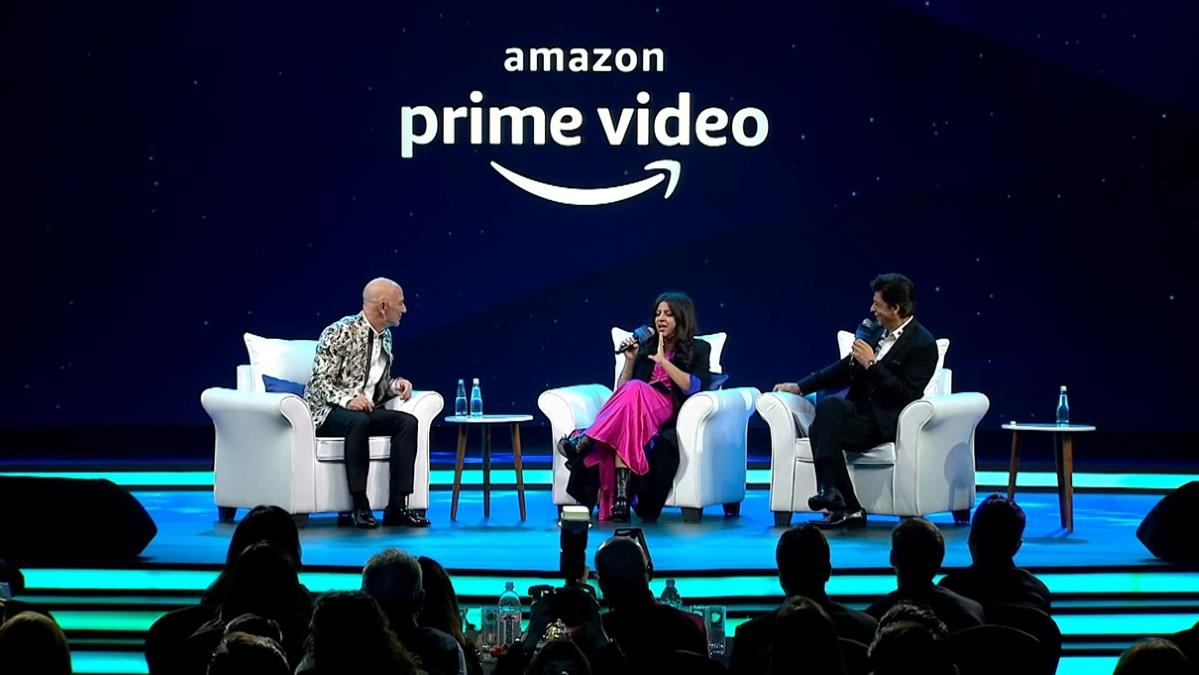 Last Friday, on his maiden visit to Mumbai, Amazon founder and CEO Jeff Bezos sat down with Shah Rukh Khan and Zoya Akhtar for a roughly forty-minute chat in which they spoke about going to physical stores, the difficulty of good storytelling, the biggest waste of their time, Bezos' advice for someone starting their career today, and superstitions. For Bezos, the last one was about wearing a specific pair of boots whenever his space company, Blue Origin, has an impending launch. And of course, Bezos was also asked about his early years with Amazon, the growth of Prime Video, and his trip to India, which saw him participate in kite flying and pay respect to Gandhi at his memorial in Delhi.

“Any day you fly a kite, that's a good day,” Bezos said in the beginning, before the conversation turned to his visit to Raj Ghat. Bezos thinks the principles of non-violence “will always be relevant and it's very hard to achieve.” After a couple of days in Delhi, Bezos came down to Mumbai. Asked about his first visit to the city, Bezos linked that to Amazon's India head, Amit Agarwal. Bezos said he has heard many intriguing stories about Amit's father over the last two decades he's known him, and how Amit's father has never been impressed. Bezos finally got to meet Amit's father the next day, and SRK joked that hopefully Bezos would impress Amit's father.

Akhtar then asked Bezos about things they tried to sell at Amazon that didn't work. Bezos mentioned the Fire Phone, which he said they spent four years on, but no one bought it. He added: “I think my mother bought one and she wasn't happy with it.” SRK then wondered if Bezos still goes to physical stores, and the Amazon founder said he still enjoys the experience for grocery shopping. Akhtar then turned SRK's question onto himself, who confessed he does his grocery shopping on Big Basket, though he does go to physical stores for underwear, calling it “a boy thing” because he doesn't know his size.

The three then spoke about the world of entertainment, with SRK kicking off things by claiming Bollywood people are pompous and that they demarcate what they do to make art and what they do to make money. With the ball in Bezos court, he said you produce the best thing when you do both together. At the same time, he noted that it's so hard to tell riveting stories which is why there are so many bad movies / TV shows.

As SRK got up to offer water to Bezos after his long answer on the importance of storytelling, Bezos returned to SRK's earlier point and pointed out that folks in the film industry clearly aren't pompous. He then called SRK one of the most humble individuals he's ever met. SRK deflected the praise and said that's only because his last few films haven't done well, which brought out heaps of laughter from the crowd.

On the related topic of Prime Video, asked by Akhtar about what he last watched, Bezos said he binge-watched The Expanse season 4, which Amazon picked up after it was cancelled during season 3. Bezos then claimed they made it better and that season 4 was the best of the lot. As for Prime Video in India, he claimed it was doing better than anywhere else — “If we look at number of hours watched, it has grown by six times” — and said that they are doubling down on investments.

SRK then asked everyone what they think is the biggest waste of time. He first answered himself with sleeping, followed by Akhtar who said it was sycophancy. Bezos said he likes freedom of time, rather than everything being over-scheduled.

Bezos also touched upon Blue Origin, linking it into how that relates to climate change and saving Earth. He recently signed the Climate Pledge, which meets the goals of Paris Accords by 2040, 10 years earlier. Oddly enough, earlier in January, Amazon threatened to fire its employees who were pushing for better policies at Amazon, including not working with fossil fuel companies for Amazon Web Services. Bezos said as a large company, Amazon can lead the way on collective action. It plans to have 100,000 electric delivery vehicles on road by 2030, over and above electric rickshaws in India.

The conversation ended with Bezos talking his about role in Star Trek Beyond, which he said he had to beg for years to land, due in part to his specific requirements. SRK then made Bezos do a live performance of sorts, getting the Amazon founder to paraphrase the famous line from a remake of a film he starred in, Don: “Jeff ko pakadna mushkil nahi, naamumkin hai [It's not difficult to catch Jeff, it's impossible].”