From the visuals (Blade Runner to Hitchhiker’s) to the score that features theremin. 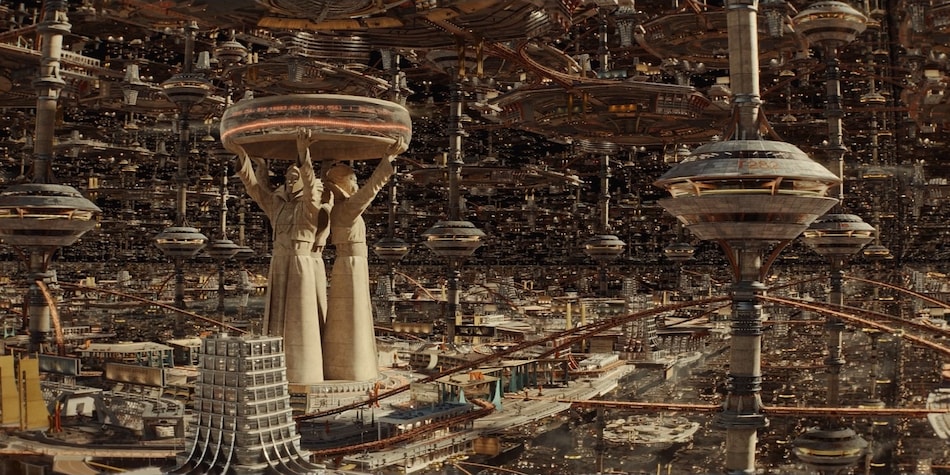 Loki episode 1 — now streaming on Disney+ and Disney+ Hotstar — introduces Marvel fans to a new all-powerful body called the Time Variance Authority (TVA). Loki director Kate Herron looked to brutalist architecture that emerged in 1950s Britain to depict the home of the TVA and blended that with a bunch of iconic sci-fi properties such as Brazil, Blade Runner, and The Hitchhiker's Guide to the Galaxy. Herron said that Loki is her “big love letter to sci-fi.” That even extended to Loki's score — provided by Natalie Holt — with Herron wanting the instrument theremin to play a role. In fact, her Loki pitch to Marvel Studios featured theremin expert Clara Rockmore's “The Swan.” Holt mixed that with Nordic instruments given Loki's ties to Nordic mythology.

“In terms of the aesthetics, I just wanted Loki to be like this big love letter to sci-fi so I stole from everyone,” Herron said with a laugh, talking to reporters over Zoom. “But I would say I'm sure people will see Brazil, Blade Runner, Alien, [and] the book Hitchhiker's Guide to the Galaxy. I think it's just because we're going to this really interesting place that is outside of time and space. It's not in the past and it's not in the future, the TVA. So I was like, ‘Okay, so how do I show this? Because it's almost like this [Las] Vegas like office space, in the sense that there isn't day there isn't night.'

“And I definitely pulled from the comics a lot, because they have these amazing images of like rows of desks going off into the infinite. You see that in the first episode when Loki looks over the viewpoint. It's like an office the size of a city stretching out into nothing. And I think I was definitely inspired by those. But also, just trying to bring some level of reality to this weird office. I didn't really want it to feel like super futuristic in a sense. I thought it was more interesting that, pulling from these different eras like the brutalist architecture which I think really complements the Timekeepers because they're these God-like looking over the TVA, whereas like the Midwest style is very heroic and very classy. And I thought that was quite fun to represent the heroism of the TVA.”

Herron added: “With the music, so when I pitched to Marvel originally, I had this playlist and I had a song on that playlist which was ‘The Swan' by Clara Rockmore. And it's like this theremin kind of cover, and I knew I kind of wanted theremin to somehow play into our score because I was pulling from so many sci-fi references. But beyond that, like I remember when I met [Holt], it was amazing. She was like, ‘I want the score to be inspired by Loki's personality,' which instantly connected with me. It was like operatic and bold and really quite different.

“And I love sci-fi so I was really excited by her using like different ticking sounds. You can hear the theremin but she also mixed that with these kind of Nordic instruments because that represents Loki. She's a genius, basically, is like my answer to the score. And it definitely inspired me, because she came on board when we were like in the middle of being shut down for COVID. She was sending me tracks and it would give me ideas like, ‘Oh I could cover the scene this way and I could do this with the camera.' I think it was a really amazing collaboration working with her.”